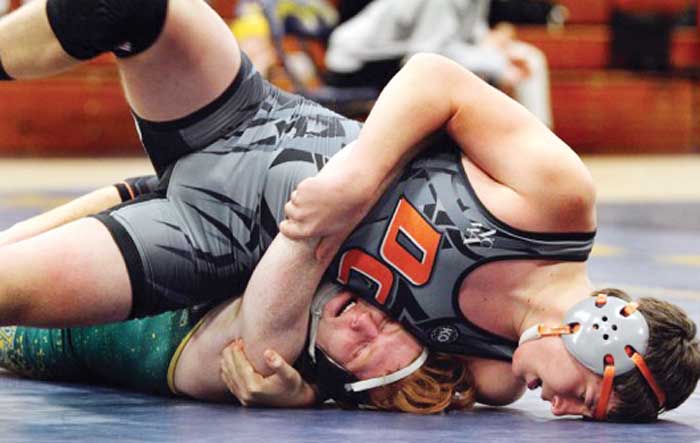 Bryson Hunter has been dominant at 182.

It’s been a wonderful season for Davie’s wrestling team – except when West Forsyth is in the picture.

Davie’s only loss as a dual team was to West. Davie scored 199 points in the Central Piedmont Conference Tournament. But it was 39 fewer than the total from – you guessed it – West.

“There were some studs sprinkled in there,” assistant coach Timmy Allen said. “We wrestled like we were supposed to.”

The weekend before, Davie captured the 26-team Sarah Wilkes Invitational. The Rumble triumph didn’t feel the same as the conquering of Sarah Wilkes just because there were not as many mean opponents.

“We wrestled pretty good, but it wasn’t like the Sarah Wilkes tournament or anything like that,” coach Buddy Lowery said. “It wasn’t as good as what we wanted. We still made mistakes here and there. That’s why you’ve got to practice.

“We’re beat up. We’ve got black eyes and the whole nine yards. It’s wear and tear.”

One of the most exciting matches: A. Olmedo dug a 5-0 hole against Central Davidson’s Gavin Hailey. Then he staged a furious rally before winding up with a pin.

Gillis, Trader, Sigmon, Allen, McCune, Hunter and J. Olmedo had pins to lead an 81-0 onslaught over visiting Parkland on Jan. 26.

It was the final regular-season match in the old Davie gym, and it was senior night for Smith, Trader, Sigmon, Allen, Isaac Arcos, McCune and Carter.

The win improved the War Eagles to 30-1, marking the eighth 30-win season in Lowery’s career. It’s the most wins for Davie in seven years.

Davie’s momentum cooled in the CPC Tournament at Tabor on Jan. 28. West scored 238 points to claim first. Davie had 199. It was reminiscent of last year’s tournament, when West outscored Davie 271-228.

Seniors Allen (138), McCune (170) and Carter (195) and sophomore J. Olmedo (220) flexed their muscles and won conference championships as individuals. It was the second CPC titles for McCune, who captured the same weight class two years ago as a sophomore, and J. Olmedo, who won it at 220 last year as a freshman. Allen and Carter became first-time champions.

It was an otherwise unremarkable day for Davie. Smith, who was a heavy favorite at 113, and Sigmon were scratched from the lineup as they failed to make weight. Wise forfeited in the finals to nurse his ailing shoulder.