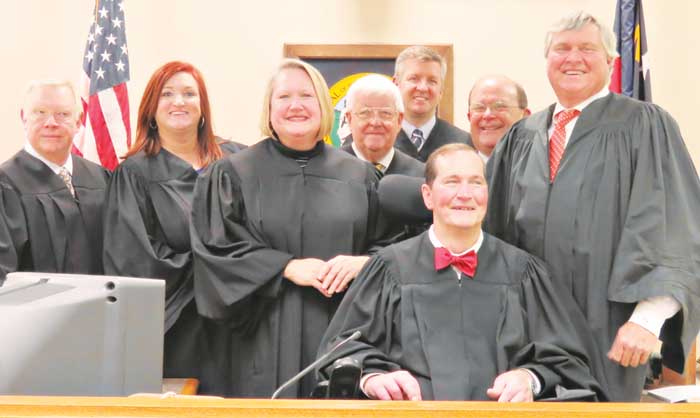 Lori Hamilton is surrounded by fellow judges and prosecutors during her swearing-in ceremony.

Lori Hamilton was sworn in Jan. 1 as the new resident Superior Court Judge in Judicial District 22B.

Joined by her children, Ryan Hamilton, Sara Lineberry, and James DeWitt, who held her Bible during the oath, Hamilton was sworn in by retiring Judge Ted Royster Jr. Her parents Wylie and Barbara Berry assisted with her robe.

A lifelong North Carolina resident, Hamilton has lived in Davie County since 1988 and practiced law here and in Davidson County since 1991. She has decades of superior court trial experience, including capital murder trials, major felony trials and sentencing hearings in state and federal courts.

She will no longer be able to practice law and will not hold court in the county for at least the first six months of the year. She held court for the first time earlier this week in Iredell County’s civil superior court.

At Hamilton’s swearing-in, the courtroom was standing-room only, with many elected officials and judges in attendance, including Superior Court judges Lynn Gullett of Iredell County and Mark Klass of this district.

During her campaign, Hamilton pledged her commitment to the promotion and defense of a fair system of justice, with a conservative approach.

“I am deeply honored to be the new resident Superior Court judge. I understand and appreciate that I follow in the footsteps of some of our state’s most esteemed jurists, most recently the Honorable Lester P. Martin and the Honorable Theodore S. Royster. I will work hard to reach the very high bar set by my predecessors and to earn the trust bestowed upon me by the voters in my two counties,” Hamilton said.