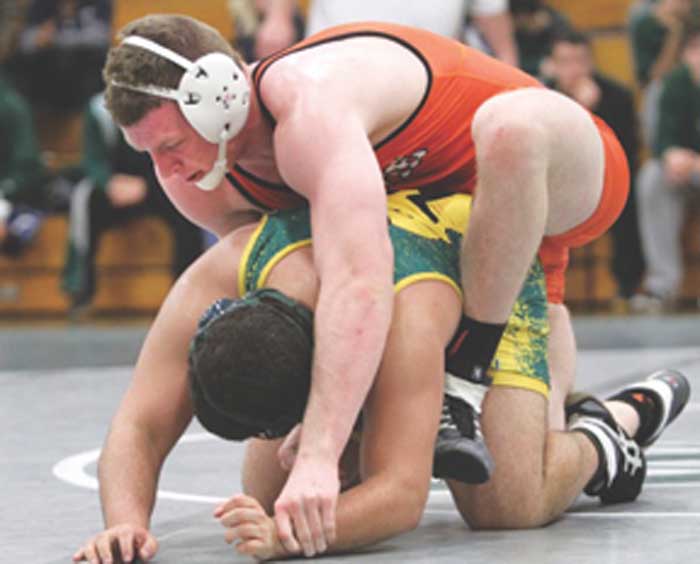 The Davie wrestling team’s blissful season hit a speed bump at West Forsyth on Dec. 21. The War Eagles lost the ballyhooed showdown of unbeatens, 28-22, to the Titans, and there were plenty of shouldas and couldas after the War Eagles fell a win or two short.

But other than missing their chance to win the Central Piedmont Conference’s regular-season title for the 26th time, everything is cool. Everything is fine. Everything that was on the preseason table remains on the table as the calender nears January.

Davie lost by six points to the defending 4-A champion and the favorite to win it all again in 2017. But the teams could meet again in the postseason, and the War Eagles are comforted by the fact they went toe-to-toe with the Titans.

Moments after winning it all in 2016, Atwood told the Winston-Salem Journal: “I’ll go ahead and tell you right now. I think that next year we will be (even) better than what we are this year.”

Earlier this season, he told the Journal: “Anything short of winning the state championship is going to be a disappointment. We have a really good team and we’ve worked really hard to achieve that goal. And overall I think we are more talented this year than we were last year.”

After Davie’s best start in seven years (19-0) was stopped by West, Davie coach Buddy Lowery said the match went about like it was supposed to – down to the wire.

“We didn’t have a bit of luck,” he said. “They did what they needed to and stayed off their back. It was an exciting match, but I don’t think we wrestled up to our capabilities and I think our kids realize that. Everybody up and down the lineup could have done a little bit better, and it would have been ours for the taking. But like I said, (West) did a heck of a job.”

At 1-1 in the CPC and with no other league team appearing capable of upsetting West unless something crazy happens, Davie will likely go two straight years without winning the CPC for the first time since 1992 and 1993.

The match started at 126, and Davie couldn’t have started any worse. It dropped the first seven weight classes to dig a 25-0 deficit. The War Eagles finished strong, sparked by senior Kyle McCune’s 3-1 decision at 182. Senior Jesse Carter (5-0 decision at 195), sophomore Jesus Olmedo (5-1 decision at 220) and sophomore Anthony Olmedo (forfeit at 285) chopped the margin to 25-15.

“One of the better matches we wrestled was at 120 (with Gillis),” Lowery said.

About those shouldas and couldas. Carter, J. Olmedo and Smith won but needed bigger wins. Josh Shore lost 2-0 at 106 when West clinched, and that was a difficult one to swallow because Lowery felt like he deserved better fate.

“Josh was close to getting a takedown and close to getting back points. But close doesn’t count unless it’s hand grenades. (The referee) didn’t call it, so I don’t guess we had it. If Josh would have won and it ended up 25-25, I don’t know how far down the criteria it would have gone to decide who the winner was. They had one pin, but we had one (win by) forfeit.”

The silver lining: The teams could meet again in February, and the roles could be reversed with enormous stakes on the line.

“They don’t know how good they can be,” Lowery said of his team. “They can be as good as they want to be. This match showed it.”

It was a four-team meet at West, and Davie had a terrific response, including a 41-24 win over a Northwest Guilford team that was 16-0 coming into the night.

Davie got pins from Shore, H. Smith, David Sigmon and Will Allen. Hunter Strickland won by technical fall. Gillis and J. Olmedo won decisions. A. Olmedo got a forfeit.

The next day, Davie overwhelmed the field in the Black Hawk Duals at West Wilkes, outscoring the competition 307-51. The wins were 64-6 over West Iredell, 72-6 over Forbush, 61-9 over Bunker Hill, 62-6 over Alexander Central and 48-24 over West Wilkes.

The 24-point margin over West was another marquee win for the War Eagles, as the Black Hawks entered with an 18-1 record.