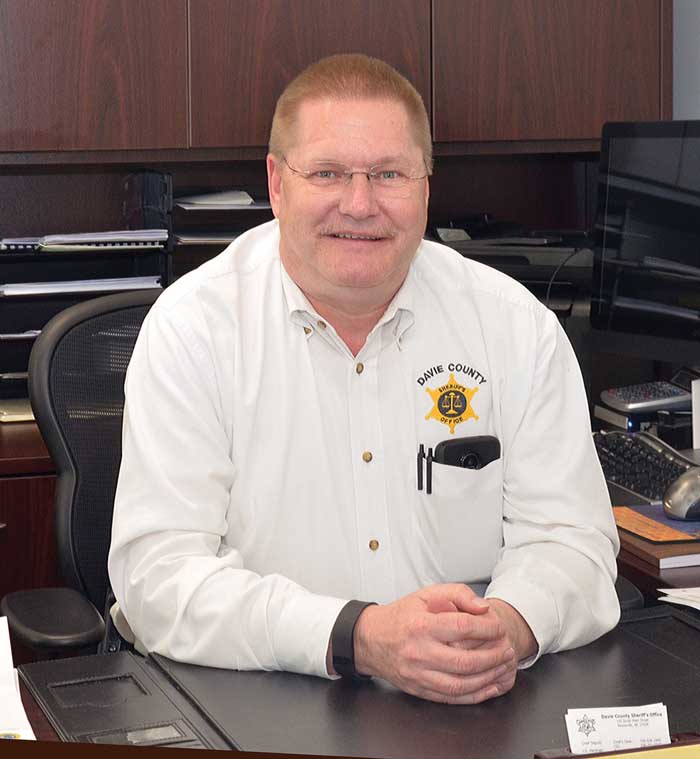 J.D. Hartman is no Andy Stokes. He’ll tell you that pretty quickly.

If you want to wheel in first into a crime scene, ride with the sheriff.

If you want to try to figure out what happened, and what is on the way on crime trends, hang out with the soon-to-be sheriff.

Hartman said that while he is honored to become Davie’s next sheriff on Jan. 1, he let his predecessor know that it doesn’t need to happen this way. He was fine with the way things are.

Hartman was one of the first people Stokes called after first being elected in 2006. Hartman was working as a detective in Iredell County, and Stokes called and asked why he had left the Davie sheriff’s department, what he thought needed to be done to make things better.

At their next meeting, Hartman agreed to come back to Davie County to head Stoke’s criminal investigation unit. A few months later, Stokes named him the chief deputy.

He says the transition should be rather seemless, although if promotions are made from one job opening, it creates a sort of ripple effect. “My task as chief deputy is to run the operations of the sheriff’s office and to implement what the sheriff wants,” he said. “That’s what I’ve done.”

Hartman said he enjoys keeping up with new laws, and following crime trends. Those that reach big cities eventually filter their way to places like Davie County, although several years later, he said.

“It’s a constant struggle to keep up and be prepared for what’s coming,” Hartman said. “Technology works both ways. We can investigate quickly.

“Law enforcement is more specialized and that will continue. We will have to develop policy to meet these changes.”

Hartman has been a Mocksville police officer, and worked in Iredell and Forsyth counties, under three sheriff’s and two chiefs of police.

It wasn’t a career he sought. He grew up in Forsyth County, working at his father’s bait shop in Clemmons, and later also for Budd Securities and at a convenience store.

A friend told him they were hiring for officers at Wake Forest University. He applied, was hired and sent to rookie school.

Hartman said his years at Wake Forest were beneficial. There are good people and bad people in all environments, and at a college, those people change every year, unlike a place like Davie County where officers deal with the same lawbreakers over and over.

“Solving a mystery, catching a person, I really enjoyed that,” he said, “and found out in some way, that I was pretty good at it.”

Like the sheriff, he is proud of the improvements at the Davie department. “Now, we’re on a par with folks around us and in some ways, better.

“We’re here to serve the citizens and will do the best job we possibly can,” he said. “My philosophy is not much different than Sheriff Stokes.”