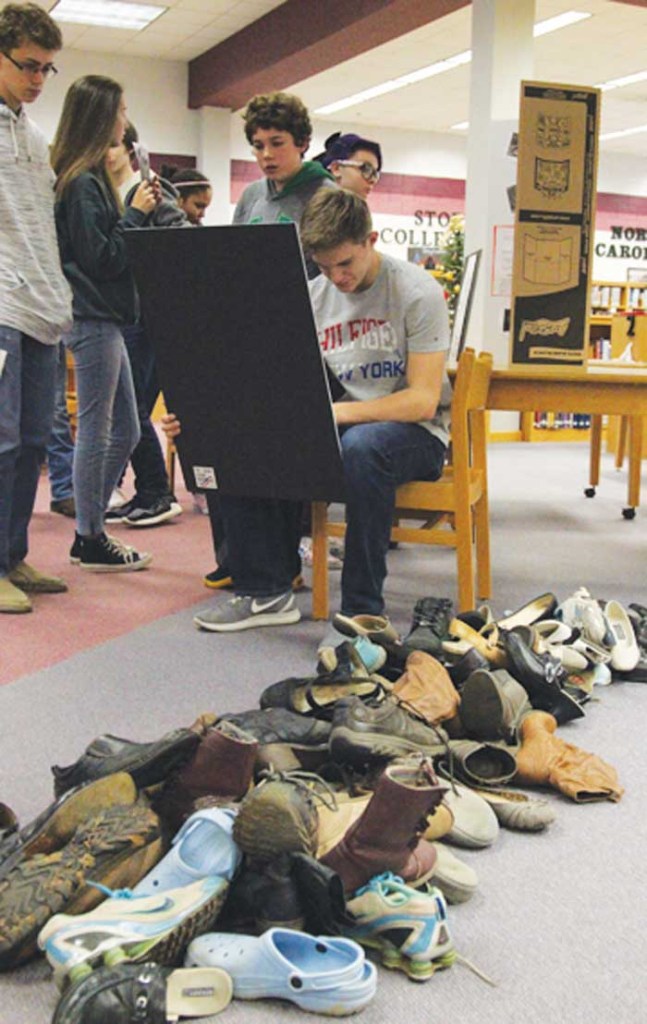 Hunter Meachum reads about the Holocaust.

Students in Brooke Hartsell’s world history classes visited the Holocaust Museum on the day after the 75th anniversary of the bombing at Pearl Harbor without even leaving Davie High School’s campus.

They traveled to rooms in the museum that dealt with chronological topics ranging from pre World War II Germany and the rise of Hitler through the Nuremberg War Trials and modern day examples of genocide and hate groups.

“I was struggling with how I wanted to teach such a dense and important topic,” Hartsell said.  “I wanted this topic to really hit home with my students to open them up to the very real oppression that still exists in many multiethnic, multicultural societies and the ways we can work to prevent human atrocities like those that occurred during the Holocaust.”

Hartsell modeled her idea of the museum on the Holocaust Museum in Washington, DC. The planning began over a month before the Dec. 8 opening of the museum. She had to garner 12 teacher volunteers willing to contribute their classrooms, assist with the setup and monitor students for a portion of their planning periods. The media center staff and technology department were instrumental in planning, setting up and moving exhibits.

After she had volunteers in place, Hartsell began the arduous month-long task of collecting resources, creating materials and compiling exhibitions for each of the five rooms that would be transformed into a Holocaust Museum.

“I used the Holocaust Museum’s teacher and student resources online to find artifacts and articles to display for my students and made many displays myself.  I borrowed a lot of materials from other teachers who have collections of their own or have visited concentration camps,” Hartsell said.

As each student prepared to begin the museum tour, Hartsell issued each one of them an identification card that listed information about a real Holocaust victim. The card chronicled the victim’s life before the Nazi occupation through the Holocaust.  It also gave details about whether the victim survived or died.

Students received brochures that explained the five exhibitions on the tour along with a schedule so they could manage their time. Hartsell said that this served to make the experience authentic.

“I went into this project with three goals in mind,” Hartsell said.  “My first goal was for the students to see the reality of the Holocaust. Those who collaborated, complied or were silent are just as guilty as the man with the toothbrush mustache. Many people do not even realize the ‘Final Solution’ to kill all Jews was not the idea of Hitler, but a collaborative solution to the ‘Jewish problem’ by Nazi elites.”

“My second goal was to show that genocide does not happen overnight. It starts with seemingly harmless actions – racial slurs and jokes, discussing ‘others’ with like-minded people and alienating yourself from those who are different. I wanted my students to recognize the early stages of oppression that lead to systematic oppression, violence and even genocide of specific groups for racial, ethnic or religious reasons,” Hartsell said.

“My third goal was to show my students how to recognize that genocide and systematic annihilation of specific groups is not a thing of the past; it didn’t begin and end with the Holocaust,” Hartsell said.  “I wanted them to be able to stand up for what they believe is right and speak against modern atrocities.”

Hartsell said she found that most of her students had a working knowledge about the Holocaust through what they have learned in previous history classes or seen on television. Most students were surprised that genocides are still occurring. The teachers hosting the rooms were surprised at some of the subject matter, as well.

“Many teachers hosting room one (the rise of the Third Reich) saw similarities to the rise of Hitler and the Nazis and our modern political climate. Some students pointed out these similarities as well,” Hartsell said.

The second and third rooms introduced participants to some of the horrors of the Holocaust and Nazi Germany – the Nuremberg Laws, survivor testimonies, stories about the euthanasia program for the physically and mentally handicapped and the Eitzangruppen mobile killing units.

“It amazes me how the Nazi soldiers could even do that to people who could have been their neighbor, friend or schoolmate,” Mollie Russell, freshman, said.  “How did the Nazi soldiers think that killing all of those people was the right thing at all?  Did they not feel guilt or remorse?”

The exhibit that seemed to make the most impact was that of the pile of shoes.  The Holocaust Museum has a display of shoes left behind by those held in concentration camps. Hartsell recreated this display which had an effect on her students.

“In the Holocaust Museum, I learned more than I ever knew. I learned that a victim had written a poem about the shoes being the only witness since shoes were harder to burn than flesh,” Tanner Hartness, freshman, said.

The exhibit in the final room showed how genocide is still being perpetuated today through hate groups.

“My favorite room was the last one about what is happening now. I didn’t know genocides still happened today,” Jadd Boulous, freshman, said.

Next semester’s students will experience an even larger scale museum. Hartsell is planning a trip to Washington in December and curators at the Holocaust Museum have prepared boxloads of information, literature and artifacts for her to bring back to Davie County.

Folks get cold for a cause