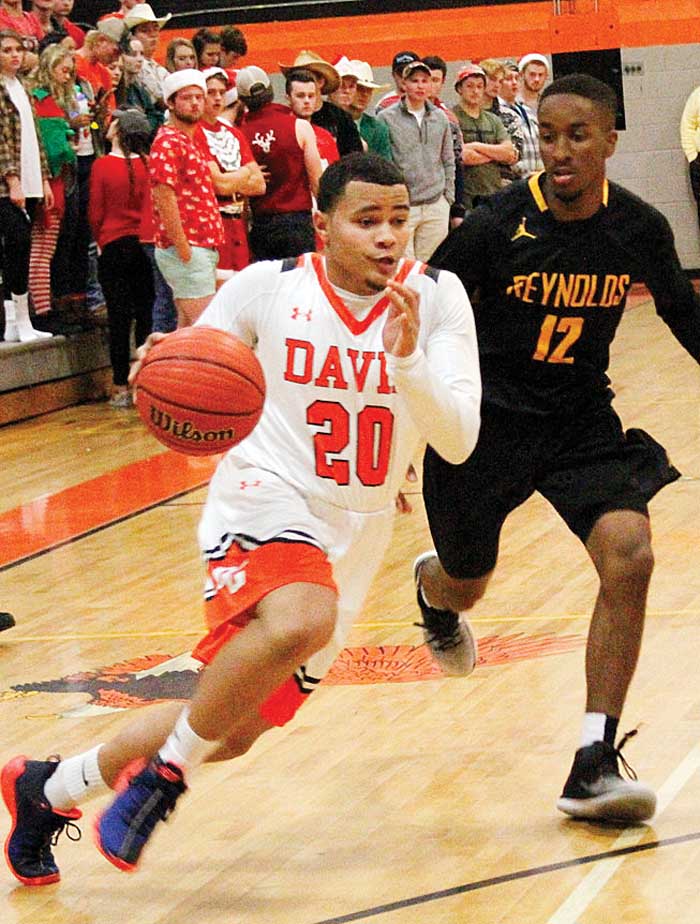 Will Shepherd drives to the basket.

But it’s also troubling that Davie is 0-2 in the CPC and it hasn’t seen Mt. Tabor and West Forsyth yet.

“When you’re 5-0 and everybody’s feeling good, life is easy,” Absher said. “Now we’ve lost two and we’re getting ready to play one of the best teams in the state (Tabor). We’ve got to really man up and figure out a way to get better.

“I still love our team. I love what our team is made of. We’ve got to figure out a way to get better in some areas.”

The home date with Reynolds on Dec. 13 was a fantastic game. The back-and-forth shots between the teams drew oohs and ahhs from the crowd. But a first-quarter dry spell put Davie in a hole, and it never could get over the hump in a 74-70 defeat.

“We missed a ton of free throws (Davie was 18 of 27 at the line), and we made some mental mistakes that we hadn’t been making,” Absher said. “We said coming in they couldn’t get a bunch of offensive putbacks, and they had six in the first half. That was tough to overcome.”

Davie started well. Owen McCormack, a 6-7 sophomore who rebounds, blocks/alters shots and shoots from outside with ease, hit a 3-pointer 14 seconds into the game. After Cooper Wall scored, Wall assisted a 3-pointer from McCormack as Davie jumped ahead 8-3. But after Cory Heiner’s floater gave Davie a 10-9 lead, Reynolds closed the quarter on a 12-1 tear.

In the second quarter, Michael Walton tore down a defensive rebound. Wall pushed the tempo and found Dylan Shoffner in the corner. His 3 cut Reynolds’ lead to 26-25 and prompted the Demons’ coach to call timeout. The Demons nailed a 3 out of the timeout. That’s the kind of night it was for Davie. Reynolds always had an answer.

Heath Slabach hit a corner 3 as Davie’s 10-4 run cut Reynolds’ advantage to 52-49. But the Demons got two easy buckets to restore an eight-point lead.

Davie kept coming. Walton’s two free throws capped a 19-10 run that pulled the War Eagles within 69-68. When Shoffner hit a pull-up jumper and Wall assisted a McCormack 3, it was 64-63 Demons. But the game’s trend continued as Reynolds responded with the next four points.

“We never tied it,” Absher said. “We never got the lead (after the early going). I think if we had, that little more surge of energy that we were looking for would have come out.”

Slabach dished out to Wall for a deep, straightaway 3, the shot rattling in and pulling Davie within 71-68 with 66 frantic seconds to play. With 13.9 seconds left, Reynolds left the door open by missing two free throws. With the score 73-70, Absher called timeout.

On the far end, Heiner inbounded to Wall, who pushed to the right of the key and handed off to Walton. He had a clean look from 3-point land, but it wouldn’t go down. Now Reynolds had its seventh consecutive win over Davie. In the previous meeting on Feb. 4, 2016, Davie lost in overtime.

“It’s a set play,” Absher said. “We had two options with Heath and Michael, because we felt like they would double Cooper off the ball screen. Hey, Michael got a good look.”

Absher did not expect the Demons to hit nine 3s. “We tried the box-and-one,” he said. “Give them credit. Other guys made shots during that time.

“We’ve got a good team. I hate (the first loss) is in conference because it’s such a tough league. And it was at home. But now you see how good you really are and see if you can bounce back on the road.”

The game at Reagan on Dec. 16 was a high-flying affair in an entertaining first half. But the Raiders pulled away, stopped Davie from mounting a serious comeback and won 89-77.

Again, Davie got off to a good start. Heiner swung it to Wall, who hit a 3 in the corner. Slabach’s 3 made it 6-0. When Walton drove baseline and laid it in, Davie was up 10-5 and Reagan called timeout.

“Some of it, you can’t defend any better than we did,” Absher said. “They’re not as big, but they’re like the Reagan from two years ago. All five guys on the floor are a threat. We tried everything we could defensively.”

Davie got an inspired performance from Wall, a 6-2 junior point guard who pumped in 28 points with four 3-pointers and 4-for-4 foul shooting. It was the seventh 20-point game in his three-year varsity career, and it matched a career high. He had 28 in a loss at Parkland as a freshman.

Walton went 8 of 11 at the line to score 19. He has been in double figures every game. Slabach and Shoffner had eight apiece as Davie cracked 70 points for the fifth straight game.

Wrestling puts on a show