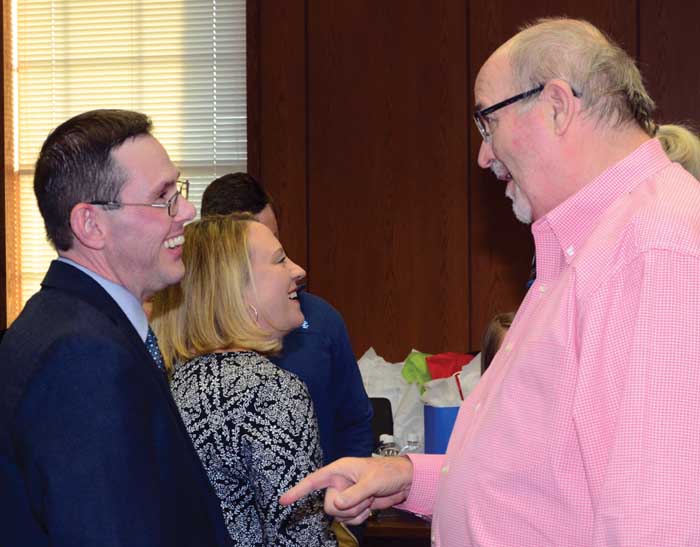 And on Monday, he was named Davie County’s newest manager, and will begin work here on Jan. 10. Commissioners voted 4-0 (Richard Poindexter was not present) to hire Eller on a three-year contract for $138,000 a year plus expenses.

Eller and his family were at the special called meeting, and greeted county employees and others after the vote.

“I believe in relationships and I believe in strong values,” Eller said. “I have a strong desire for public service and advocacy. I feel like I can add value to this community.”

Eller was chosen from 35 applicants for the job. He has been social services director in Catawba County since 2008, and recently filled in as assistant county manager, in addition to his social services duties.

He said his wife, Amy, and children, Noah, Brooke and Eva Grace, ages 15, 13 an 10, are excited about moving to Davie County. According to the contract, he has 12 months to relocate to Davie.

He earned a bachelor’s degree in social work from Appalachian State University, and a master’s of business administration degree from Queens University.

He will replace Mike Ruffin, who retired from the job as Davie manager but has been filling in on an interim basis.

“Mike Ruffin is a well-respected county manager throughout North Carolina. I am humbled and honored to succeed him and be selected by the board of commissioners to serve as county manager,” Eller said. “Our family is excited to be a part of the community and we look forward to living and serving alongside the citizens of Davie County.”

“We are excited to have someone with John’s vision to lead Davie County for the foreseeable future,” said Terry Renegar, chair of the board of commissioners. “Throughout the lengthy interview process, we were impressed with John’s skill set and energy. His sense of family and values will be a great fit for Davie County.”