Davie wins 10th straight in Round 2 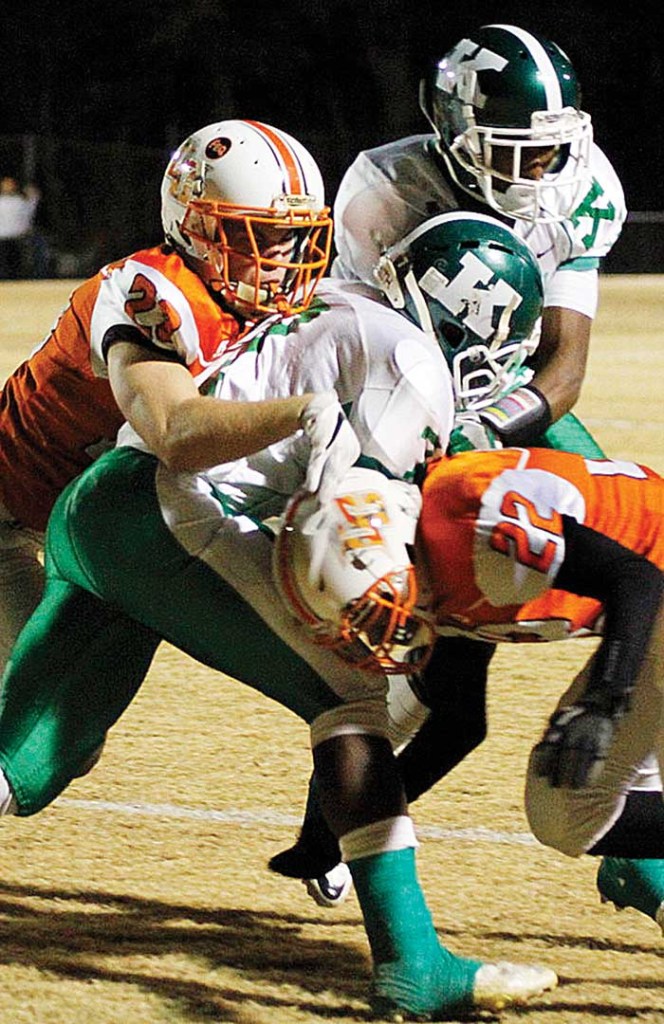 Davie’s football team put up 32 first-half points against an opponent that was allowing 15.8 per game and had not allowed 30 in a game all year.

This would have been stunning stuff, except that Davie’s offense has done similiar stuff virtually all season.

The War Eagles rolled from the outset, beat visiting Kannapolis 38-19 in Friday’s second-round 4A playoff game and produced 34-plus points for the 10th time. What made the victory that much sweeter is they reached the quarterfinals for the first time since 2010.

“We had a great week of practice, probably the best week we’ve had all year,” linebacker James Boyle said. “We were fired up and ready to put it on somebody.”

It was a record-setting night for no fewer than four War Eagles – quarterback Chris Reynolds, receiver Cooper Wall, Boyle and kicker/punter Jared Griggs.

Davie displayed razor-sharp execution during a decisive first half. On the third play of the game, Kannapolis’ quarterback and running back botched a handoff and Davie defensive tackle Spencer Wilson recovered the fumble at the Kannapolis 20. On first down, Reynolds went up top to Wall and the result was a 20-yard touchdown. Kannapolis did not adjust properly to Davie’s muddle-huddle formation, and Reynolds completed a two-point pass to Griggs for an 8-0 lead less than a minute in.

“It was a post,” Wall said. “They were playing press coverage, I got him on the inside and Chris put it right on the money. He couldn’t have put it in a better spot.”

“They left the middle of the field open,” Reynolds said. “He did the work and I just gave it to him.”

“Only if you could draw it up like that every time – get a turnover, a quick score and get mo on your side,” Devericks said. “That was awesome.”

Reynolds did his thing again. He went 17 of 27 for 246 passing yards and two TDs without a turnover, while attempting just five passes in the second half. As if that weren’t enough, he rushed for a team-high 63 yards. If you take away two sacks and a fumble that cost Reynolds 4 yards, he had 14 carries for 83 yards.

“We came out with a different mentality this week in practice, and it paid off in the first half,” Reynolds said. “We got after it (in practice) with a full head of steam.”

Wall is setting records every time you turn around, but all four receivers are weapons. Tyler Roberts (six catches for 124 yards) was a beast. Wall (four catches for 48 yards) had two TDs despite not playing the second half with a shoulder injury. Mason Wilson (four catches for 40 yards) and Beau Byerly (two catches for 22) all had two or more receptions in the first half alone.

“They’re all great athletes,” Reynolds said. “Cooper got a little banged up, but everybody stepped up. It’s good to spread the ball around. They all deserve it. They all do a great job and they all have great hands.”

Peyton Hampton, the bruising running back, scored the first of his two TDs as Davie grabbed a 15-0 lead less than five minutes into the game. The key plays: A 15-yard pass to M. Wilson and Reynolds’ 18-yard keeper.

Davie’s defense came out smoking, too. Jalen Redmond had an 11-yard sack. Spencer Wilson barely missed a sack in the end zone. Zac Williamson escaped but came up short of the marker. Cody Hendrix, Kinston Whitener and Redmond swallowed up Williamson on swarm sack. Ta’saun Martin climbed an invisible ladder to knock away a pass. When it was 25-0, the Wonders had mustered 17 yards on 15 plays, had no first downs and had five three-and-outs on five possessions.

“The tempo they set for the whole game and the demeanor they set was phenomenal,” Devericks said.

“We came out here hyped – really hyped,” cornerback Angel Perez-Hunt said. “This has been the best week of practice throughout the season. Coaches are talking about being on the edge and we came out here on the edge.”

On a pump-and-go pass, Reynolds connected with Roberts for 26 yards. Three plays later, Roberts reeled in a 24-yarder down the sideline. That led to a 32-yard field goal by Griggs. The bulge was 25-0 when Wall caught a 28-yarder on a seam route.

“Chris did a good job of figuring out what they were in and seeing what they were giving,” Devericks said. “That allowed him to trust everyone to make plays.”

Kannapolis’ first score was fluky. Williamson wasn’t looking when the shotgun snap arrived and hit him in the face mask. Players from both teams froze, thinking a flag was coming for a false start on the offense. Williamson alertly gained control of the ball and swept around the left end for 51 yards.

“When the snap happened like that, we were thinking false start,” Devericks said. “But if the whistle’s not blown, we’ve got to play in that chaos.”

After going 0 for 3 passing on the Wonders’ first six possessions, Williams completed 28-, 19- and 30-yard passes to shave Davie’s lead to 25-13. Broc Barnette blocked the extra point.

“We figured out an offense,” Kannapolis coach Mike Newsome said. “We finally found a personnel group that was going to work well against how they were playing us.”

But even the visitors’ 13 straight points did not make the War Eagles sweat. They marched 69 yards in five plays, including 13- and 15-yard completions to Roberts and Byerly, with 28 yards in penalties against Kannapolis mixed in. On an option pitch, Hampton ripped off a tackle-breaking 12-yard score, and Davie had a 32-13 halftime cushion.

Davie got the ball to start the second half, and Hampton and Reynolds were sledgehammers during a 10-play, all-on-the-ground drive that ended with Griggs’ 38-yard field goal.

When the Wonders drove from their 30 to the Davie 12 in 12 plays and came away with nothing, they were belly-up. Ronald Wilson had a sack during the series, while Anthony Olmedo and S. Wilson had stops at the line of scrimmage.

With Davie mostly running the ball and inserting subs, it got sloppy from that point on. But there were still some more highlights. On third-and-16 from the Davie 7, Reynolds found Roberts on the post for 40 yards. Eight plays later, running back Adrian Cranfill made a one-handed, 12-yard circus catch at the boundary. The 15-play drive was capped by Griggs’ third field goal (27 yards).

“Tyler came out of nowhere for his senior year,” Reynolds said. “He’s a very athletic player and he’s very strong.”

“You can always depend on Chris to throw the ball right on the money whenever you need him to,” Roberts said.

Later in the fourth, Kannapolis called a wide-receiver pass, but Barnette sacked him 10 yards back. Perez-Hunt and Hite Merrifield had interceptions in a four-minute span. It was Merrifield’s team-high six pick. Perez-Hunt is second with four, and Davie has 19 picks in 13 games. It was a stellar performance that saw Davie’s defense hold the opponent to 14 or less points for the 10th time (six Kannapolis points came on a 19-yard fumble return with 5:33 to go). Williamson misfired on 14 of 23 passes. The Wonders went 3 for 11 on third down and 0 for 2 on fourth. Aside from his 51-yard score, Williamson needed 16 carries to gain 41 yards.

And this was an opponent with a solid resume. The Wonders beat Vance 24-21, and Vance is 12-1 and still alive in 4AA.

“Fumbling the ball and giving them the ball at the 20 to start the game was just a nightmare, especially when you’re playing a very good team,” Newsome said. “We’ve recovered from situations like that in the past, but letting them score (32) points in the first half is almost impossible to come back from.”

Brown in round 2 here Friday