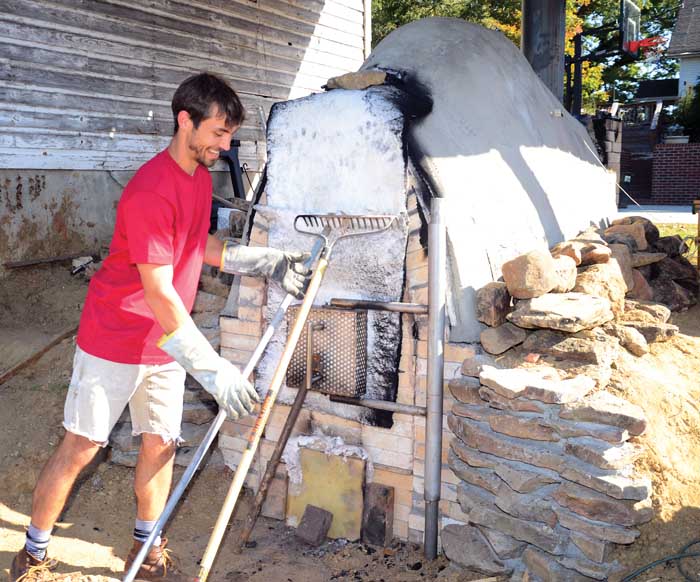 Joe Sink at his kiln off Baltimore Road.

Away from the madness of the world, from technology and the presidential race and hurricane damage and police shootings, there is the life Joe Sink has created for himself.

There’s work, Monday through Friday, at a construction firm in Durham, but come Friday evening, there’s a respite from the chaos … a chair, a mug of coffee and a fire in the backyard of his parents’ home off Baltimore Road, but this is no ordinary fire. It’s one that must be stoked every five minutes for 30 hours, and it feeds a kiln that will reach a temperature of almost 2400 degrees Fahrenheit.

Sink, 23, grew up in the old Browder farm house with his parents, Travis and Suzanne, and brothers Ben and Wesley. While a student at Appalachian State University, majoring in building sciences with a concentration in construction management, Sink tapped into an interest in pottery he had as a youngster. He took a night class through the University’s Craft Enrichment Center and was hooked. That class, taught by a local potter, led to more classes.

“I took just about every class Appalachian offered,” he said.

He said he owes a lot of his skill to his first ceramics professor, Eric Reichard, who taught him practical techniques. He has kept in touch with Reichard and purchased from him some of the material he used to build the kiln he fires every weekend.

Sink, his father, and others built the 50-cubic-foot wood-fired kiln, made up of about 1,000 firebricks that weigh eight pounds each and that were purchased in Seagrove. It took about a week, Sink said, for the brick (soft insulating brick and hard firebrick), insulating ceramic fiber, high temperature refractory mortar, stainless steel chimney, and other materials to be placed in the construction of the anagama kiln, a wood-fired kiln dating back to the fifth century.

During the 30-hour process, baking soda, introduced into the heat of the kiln, vaporizes and bonds with the surface of the pieces to form the glaze. The wood ash created during the process lands on the pottery and melts, also contributing to the glaze. The end result is a piece that is not only food safe, but also unique, because there will never be two pieces alike, said Sink.

“Each piece has a different surface due to the chaotic atmosphere of the kiln. I never know until I open the kiln a week later what the pieces are going to look like. It is a moment that sums up the culmination of months of hard work, labor, joy, frustration, and passion. Sometimes the firings are beautiful and sometimes they aren’t, simple as that. The firings that turn out beautiful are the ones that keep me coming back.”

Sink’s hands are in every piece, from the beginning, when he opens a bag of clay (that was dug in Seagrove), to when he sits at the wheel to shape the clay into a mug, plate, bowl, serving tray, vase, pitcher, or any of the other pieces he enjoys making, to the moment he puts the piece into the kiln, which holds 250 to 300 pieces, depending on size.

For a recent Kickstarter campaign (to fund the kiln), Sink had 110 orders to fill, a range of sizes and pieces, including a teapot, which he doesn’t typically make but which he said showcases precision, design, and craftsmanship.

His favorite pieces to make and use are coffee mugs.

“I really love to make functional pottery, pottery you can use on a daily basis,” he said. “A good coffee mug is my go-to. All of the wares are food-safe and meant to be used. I stress the desire for my pottery to be used, whether it’s a good sturdy mug rolling around in your car’s floorboard or a pitcher holding iced tea in the fridge.”

Among the most challenging pieces to make, he said, are pint glasses and pitchers.

“I somewhat obsess over the weight of these two forms. The pints and pitchers are something I want people to pick up and be amazed at how light they are. To throw a pot light, you have to do it relatively fast, with a little bit of water, and with as much planning and skill as possible. I have to be very focused and in the zone to get ones I’m pleased with.”

Sink’s standard, he said, is “If I see it at a store, would I be impressed?” That’s how he decides which pieces make the cut and which don’t. The ones that become victims of the firing process, perhaps because they touched a piece beside them, go into the scrap pile, but Sink explained they can be reused, so there is really very little waste.

Turned over, the bottom of every piece has the name Sink and a cross, the potter’s mark he chose in college.

“The cross is a testament to where the pottery came from. My name lets people know it came from me, but the cross lets them know where it really came from. I know 100-percent this is a gift from the Lord. I love thinking on how this process of clay being dug up, shaped and molded, and transformed by fire was desired and created by God.”

Sink can be found on Facebook at Joe Sink, but said the best way to reach him is to call him and plan a visit with him at the kiln. That way, people can meet him, see how the pottery is made and see the pieces in person. He can be reached at (336) 306-2622.