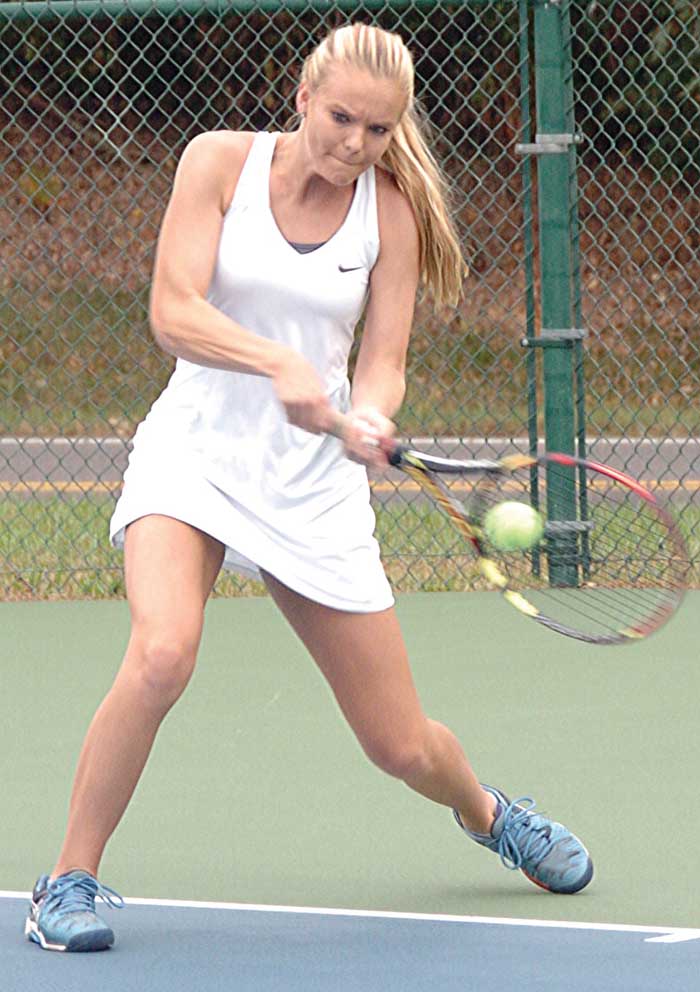 The 5-4 first-round win over Ardrey Kell, which marked the Davie tennis team’s first state-playoff triumph in 15 years, is now the second-biggest W of the season. Davie found a way to top it on Nov. 1, when the War Eagles made more history with a 5-2 victory over visiting T.C. Roberson.

It was only the second second-round match in Davie history. The other came in 2001, when Northwest Guilford blanked Davie 6-0. By ending Roberson’s 12-match winning streak, Davie improved to 16-0 to match the season record for wins over a span of 42 years. The 2007 team, coached by Sandra Boyette, went 16-4.

“This has been such an exciting season,” said second-year coach John Bullins, who spent over 20 years of his coaching career as a football assistant. “It ranks up there with the 2004 season when we went to the semifinals in football and the 2010 season when we went to the state championship in football. The dynamics are different. Every sport has its own style and intensity, and girls tennis is right up there for me.”

The Rams finished 15-2. Their only other defeat was 5-4 to conference rival Asheville.

“It feels great to make history,” No. 2 seed Sierra Foster said. “This is the farthest any team has ever gone and it feels great to be apart of that. It’s something you can tell your kids about or somebody in the future.”

At No. 1 singles, sophomore Laura Becker crushed senior Audrey Chor 6-1, 6-3. Chor actually took the first game of the match. But then it was all Becker.

“Sometimes that’s like Awakening the Kraken with Laura,” Bullins said. “She’ll bear down and then it’s game on. She got things under control real quick.”

At No. 3, senior Jennifer Ngo faced a freshman, Ava Manley, who was 12-0. But Ngo dominated 6-3, 6-3. “Jennifer responded well from suffering her first defeat last week (against Ardrey Kell),” Bullins said.

When four singles matches were in the books, it was 2-2 and the War Eagles were sweating bullets as No. 5 Annie Kinder and No. 6 Claire Myers were in the middle of nerve-wracking battles. Kinder, a senior, fought for a narrow win over senior Mafe Vergara (7-5, 7-5).

“It was Annie’s never-give-up attitude and her focus of making her opponent hit another shot,” Bullins said. “Her solid athletic ability comes out when she plays.”

“My strategy is to keep it in and wait until it’s a good time to hit a winner,” Kinder said. “Because if I’m in a bad position and I force it, I’ll mess it up. I don’t ever think I’m gonna win. I try to treat each point like it’s the end of the game, so I always go point by point. I’d like to say I was in better shape than her. She was really tired. And she was doing a lot of risky stuff, like coming to the net, and I was able to lob it to where she couldn’t get back to it.”

At No. 6, Myers and Roberson’s Abby Roberts, who entered with a 9-1 record, traded blows all the way to the end. Myers survived 6-4, 6-7 (0-7), 10-5. She fired blanks in the second-set tiebreaker. But she kept grinding and won the third-set tiebreaker convincingly.

That allowed Davie to take a 4-2 lead to doubles.

“Being my senior year, I really wanted it and I wanted it for everybody else,” Myers said. “So my heart was definitely in the right place, because I was like: ‘We’ve got this.’ I have so much support and love for the team. I am very tired, but I could keep going if I wanted to.”

After the second set, Myers looked as if she was destined to fall a little short. But she found the resolve and resilience to turn it back around.

“I noticed she had a mirrored slice to me,” Myers said. “So I found that by hitting it to where it threw her offbalance on the opposite hand, her slice would not go over the net as easily. Those lobs that hit the baseline, those would off-center her. So when she would come back down to look at the court, her slice may not go over. I guess that was the trick.”

When Bullins was told of Myers’ analysis, he replied: “Boy, that’s surgical precision.”

When Davie’s No. 1 doubles team, Becker/Foster, were behind 4-3 to Roberson’s top two seeds, Davie’s other two doubles (the Ngo sisters and Kinder/Myers) were behind as well. So a 5-4 win for Roberson was definitely in play.

After jumping ahead 3-1, Becker/Foster dropped three straight games. But then they kicked into high gear, going on a 7-3 run to win 10-7 and clinch the team victory. It was the fifth win in six tries for Davie’s top duo.

“That’s a testament to Laura and Sierra refocusing, resetting and their never-give-up attitude to get back on top,” Bullins said. “Sierra hit some really good shots. She may have made an unforced error, but she responded with a flow of good, winning shots. So I was real pleased with Sierra. She didn’t get down on herself.”

This from Foster: “We tried to focus on what we were good at, some of their weaknesses and then exploit that. Laura’s serve is great. It sets up points. Her forehands, her backhands, everything … She saves me. I can really count on her when I need to. We have great chemistry because we’re best friends.”

When Becker/Foster sealed it, their teammates were making hay on the other courts. At No. 2, the Ngo sisters were ahead 8-5. At No. 3, Kinder/Myers were behind 6-7, but “we were about to make it 7-7,” Myers said. “And we were going to go ahead and take the whole thing. That was the plan.”

The support from the reserves did not go unnoticed. Every girl on the roster was sitting courtside pulling for their teammates. There are seven seniors, including Macie Latham, Loren Myers, Shelby Nelson and manager Sierra Latham. Aubree Privat, Grace Nixon and Moriah Lane are juniors. There are five sophomores, including Emery Rosenbaum and Sydney Smith. Aisulu Ball and Megan Cash are freshmen. MaryAnne Byerly is Bullins’ assistant coach.

“They’re our seventh player,” Bullins said. “The players gathered and cheered on the girls, and that means a lot. It can be a psychological advantage. They all get along. It’s amazing.”

Two days after taking the giant step against Roberson, the War Eagles’ magical season came to an end, 5-1, in the third round, or the final eight. Myers Park is a juggernaut that improved to 19-0 with its 16th shutout.

“Their lineup is so strong,” Bullins said after the road loss in Charlotte. “They’re not overpowering hitters, but boy could they place the ball. They had great touches and great placement.”

Davie, South Mecklenburg and Hough are the only teams to scratch against the Mustangs. At No. 1 singles, Becker handled senior Maddie Weber 6-4, 6-1, handing Weber her third loss in 17 matches. Becker was down 4-3 in the first set before claiming the final three games.

“She was uncharacteristically making a few unforced errors,” Bullins said. “We had a little talk. I just said: ‘Hey, relax, make her make the errors and you’ll be in good shape.’ She settled down, got back on track and took the lead. In the second set, she was lights out again. It’s like she gets stronger as the match progresses.”

The War Eagles could console themselves by knowing they lost to a superior opponent. The Mustangs’ 2-5 seeds have a combined record of 29-0. Afterward, Bullins reminded the girls that 16-1 was a huge accomplishment.

“I told them to keep their heads up and be very proud of what you accomplished this year,” said Bullins, who bid farewell to seven seniors, including starters J. Ngo, Kinder and Myers. “Their senior leadership was a big plus throughout the season. It was emotional to see them play their last match. I appreciate all the seniors. It has been an exciting ride.”