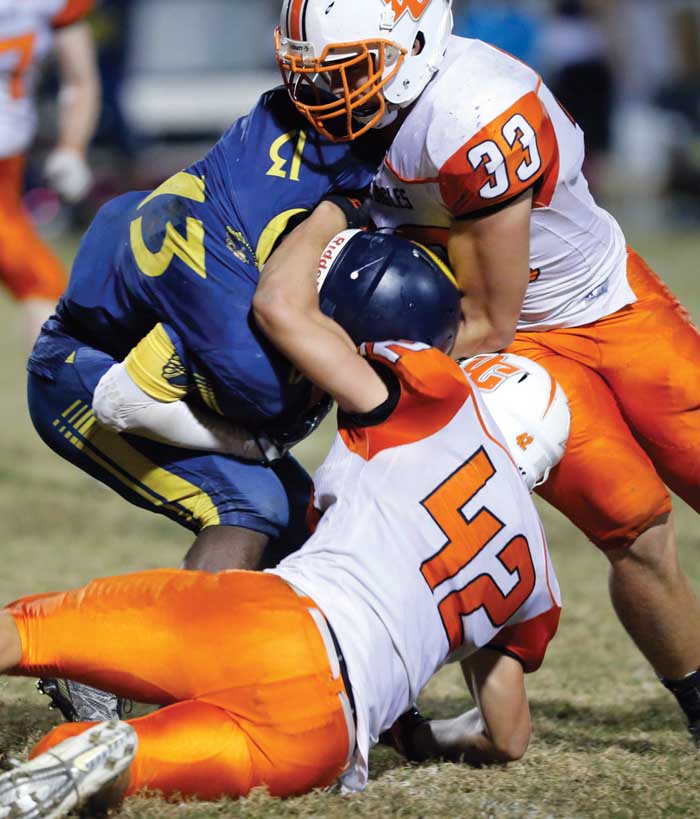 WINSTON-SALEM – This Davie football team will make you believe in something special.

In a span of 1:28, Mt. Tabor wiped out Davie’s two-touchdown lead and tied the game at 14 with 11:39 to play. The Spartans had an opportunity to steal it, but the visiting War Eagles refused to let it happen. They responded with 21 unanswered points in a span of 7:33 and won the marquee matchup 35-14 Friday.

Mitchell Ijames is a big reason why. Before he became a hero, he felt like a zero. When Tabor hit a home-run ball on an 80-yard connection from quarterback Kedrick Patterson to Blake Whiteheart, who got free over the middle and outran the Davie secondary to the end zone, Davie was in a little trouble at 14-14. Tabor had the momentum and Ijames was blaming himself.

“I let my team down by letting him give me a double move,” Ijames, a junior safety, said.

“He said: ‘Coach, he showed me the corner first and then bent it back in,’” coach Tim Devericks said.

Less than two minutes later, after Davie’s offense went three-and-out, Ijames got a chance for redemption as Tabor ran the same play from the opposite side. Ijames came up big, jumping the route, intercepting and returning it 22 yards to the Tabor 18. Davie scored in two plays, igniting the overpowering finish that clinched at least a share of its first Central Piedmont Conference championship since 2011.

Red-hot Davie improved to 9-1 and 5-0 in the CPC. Tabor, which had no margin for error in its quest for a share of first, fell to 8-3, 4-2. The clutch pick was Ijames’ first on the varsity level. Moments like that are what make football, and sports, so darn special.

While the offense had trouble getting traction, Davie’s tough-as-nails defense came through. Had the defense been less than stellar, Davie may have lost. It was stellar, and Davie has its longest winning streak (seven) in 12 years. The 2004 team won 14 in a row.

“In a big game like this, tied 14-14, I’d pick no other group to be by my side,” offensive tackle Luke Pratapas said. “We’ve handled tough situations all year, and we’ve managed to come out on top in most of them. I really believe in my guys and it’s time to make a run.”

On the game’s first possession, Tabor coach Laymarr Marshall opted to go for it on fourth-and-1 from the Davie 49. With running back Da’Quan Mason taking a direct snap from a jumbo formation, linebacker James Boyle blitzed through the right side of the Tabor line and stuffed Mason for a 1-yard loss. That set the tone as Davie limited Mason to 69 yards, or 63 below his average.

After Patterson went deep and found Teddy Christakos for 51 yards to the Davie 33, Mason fumbled, the ball taking a one-hop bounce to Davie’s Hite Merrifield.

Davie’s first three possessions went punt, punt, punt, and Reynolds started 1 for 7. But the War Eagles stayed calm, putting together a 10-play, 72-yard drive to take the lead. Reynolds completed three straight passes – two to Wall and one to Adrian Cranfill – before Cranfill made at least five would-be tacklers miss on a 16-yard run to the Tabor 14. After Peyton Hampton moved the ball to the 1 on a third-and-goal play from the 5, the big fella slipped a tackle in the backfield and scored. Jared Griggs, who went 5 for 5 on extra points, made it 7-0 with 7:03 left in the half.

“They did not want to give up the big pass,” Devericks said of Tabor’s defense. “They were going to make us (drive methodically) down the field. It took a while for everyone just to settle down, relax and execute the plays.”

Mason’s 19-yard run put the ball at the Davie 15, but Davie’s defense turned back the Spartans. On first and second downs, Boyle and Kinston Whitener stopped Mason after minimal gains. On third down, a pass to Whiteheart fell incomplete as Angel Perez-Hunt, Ijames and Merrifield were all in the vicinity. Then Ben Gardner was wide left on a 29-yard field goal.

A possession later, Tabor had first down at Davie’s 35. But Spencer Wilson sacked Patterson for a 7-yard loss and Boyle’s pressure led to an incompletion.

Tabor was putting up a good fight, trailing 7-0 at halftime despite a 173-93 advantage in yards.

“Coach told us to keep fighting,” center Bailey Sloan said. “Our defense stepped up a lot. Our defense kept us in it.”

When Davie was whistled for holding on the first possession of the third quarter, it was third-and-24 from the Davie 25. Reynolds made the kind of play he often has over two years, producing another “wow” moment with a spectacular 46-yard completion down the Davie sideline to Roberts.

“Tyler was saying they were giving him the outside release,” Reynolds said. “So I looked to my right and saw Tyler throw his hand up. I gave him a shot and he ran under it.”

Reynolds looked left before turning right and launching the ball over two defenders.

“They had a safety coming from the half, they had a corner underneath and Chris dropped it in there,” Devericks said. “Tyler made a great move off the line to get open.”

Three plays later, Reynolds floated a fade to the beastly Wall, who elevated over a 5-9 defensive back to reel in a 23-yard TD. Davie had driven 77 yards to take the 14-0 lead.

“That was Coop being an athlete right there,” Reynolds said. “He’s a freak.”

“It was like a jump ball in basketball, and Cooper went up and used his athletic ability,” Devericks said.

When Davie forced a turnover, it appeared to be in complete control. An outside run to D.J. Morgan lost 7 yards. Ijames was the first to arrive, and Boyle and Cody Hendrix shoved him out of bounds. Patterson heaved a 50-yard bomb on the next play, and Broc Barnette intercepted at the Davie 30.

“Broc is one of our better athletes on defense, and he went up and made a play,” Devericks said of the outside linebacker.

With Tabor’s back to the wall from its own 8, Morgan turned it around for the Spartans with a 50-yard run. That sparked a 92-yard march in which nine of 10 plays were on the ground, and Tabor was within 14-7.

Immediately following a Davie punt came the 80-yarder to Whiteheart, and it was suddenly 14-14.

Tabor’s offense was quickly back on the field. Boyle and Anthony Olmedo smothered Morgan for a yard loss. Then came the Ijames interception that whipped the visitors’ side into a frenzy.

“We were on the sideline trying to figure out how to get the ball moving,” Reynolds said. “The next thing you know, Mitchell gets a big pick and we’re in the red zone. So the credit goes to him and the defense.”

“He was a little down after the (80-yard TD) they made on him,” Perez-Hunt said. “He knew what he was capable of, and he went out next series and made a play – a great play.”

“When Mitchell saw the same backfield action, he was expecting the same play,” Devericks said. “That’s why he was able to come down on it.”

The Spartans kept daring Reynolds to run, and he made them pay with 15- and 3-yard runs, the latter a TD that broke the tie, 21-14. Perez-Hunt and Barnette diagnosed a swing pass to Christakos, resulting in a 4-yard loss, and Tabor punted. About three minutes later, Reynolds faked a handoff to Cranfill, barrelled through the left side and ripped off 26 yards to the Tabor 10.

Indeed, Reynolds is a dangerous runner if you choose to take away his passing lanes.

“They were keying on (Cranfill and Hampton) the whole game,” Reynolds said. “The three technique went with the running backs. That gave me an opportunity to run the ball and I made the most of it.”

On third-and-goal from the 7, Reynolds used a quick release to zip the ball through a tight window to a slanting Roberts. The TD came with only 4:09 remaining, and Davie could smell it at 28-14.

“I was a little scared because I saw those two defenders, but as soon as I went up I knew I was coming down with it,” Roberts said. “I was just happy Chris gave me that opportunity.”

After defensive tackle Jalen Redmond buried Patterson well short of the marker on fourth-and-7 from Tabor’s own 23, Hampton added the exclamation point, chewing up 9 and 15 yards to cap the scoring.

“It’s tough to stay in it for the whole 48 minutes when we’re playing with the fire in our eyes,” Pratapas said.