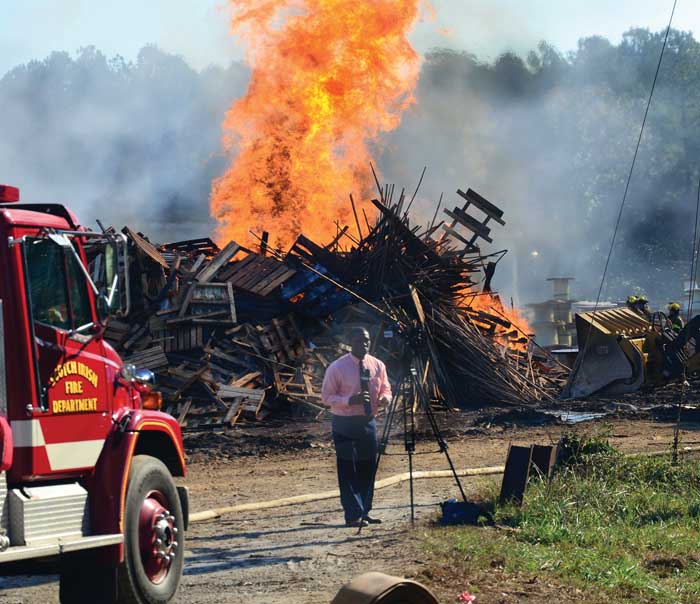 A television reporters does a story from the Seaford Lumber Co. fire Friday morning.

Mocksville Fire Chief Frank Carter knew it was big when he left his home about four miles away.

Employees on their way to work at Anderson Aggregates Seaford Lumber Co. plant on Buck Seaford Road near Mocksville knew the same thing.

Loads of sawdust and wooden pallets between buildings had spontaneously caught fire, according to Davie Fire Marshal Jerry Myers. About nine fire departments responded, spending most of the morning putting out flames, then containing the blaze as it was allowed to burn itself out.

No buildings or equipment was damaged, he said.

Part of the problem was water. It took a lot of water and hydrants were scarce in the neighborhood. The result was a lot of smoke. County residents were told via the 911 system to expect to see smoke.

Carter said he is grateful not only for the firefighters, but for the community that took care of the firefighters with food, water, Gatorade and other needed supplies. He said it may have been the single largest water shuttle operation in the county’s history.

That smoke got heavier in the Cooleemee area on Sunday, when a building owned by Roger Spillman caught fire beside the old mill, part of which is being demolished. It too, required firefighters from multiple departments and counties.

The cause of that fire is still under investigation, Myers said.