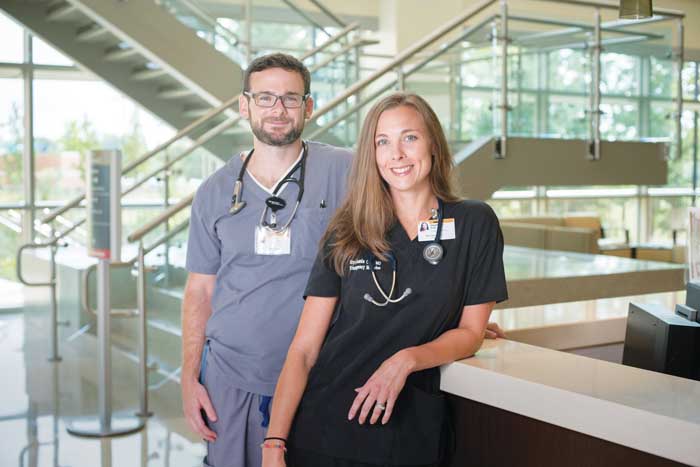 BERMUDA RUN – The Emergency Department (ED) at Wake Forest Baptist Health-Davie Medical Center is seeing about 300 patients more a month than it did two years ago.

“I knew she would be the perfect fit for our culture here at Davie Medical Center,” Cline said of his former classmate. “She has that intangible bedside manner. We want not only intelligent people, but people who connect well with the patients and do so more with personality. Stephanie certainly fits that bill.”

Cox said she chose emergency medicine as her specialty because she enjoys the fast pace of the ED, as well as the variety of patients.

“Whether it’s relatively minor or extremely critical, there is always an acute need to be addressed with the patients we see,” Cox said.

She welcomes establishing a relationship with patients and their families, as brief as those relationships sometimes are.

“You just try to provide the best care for each patient that you can and be kind to every patient and their family,” Cox said. “No one wants to be in the emergency department; they’re usually not having a good day if they’re there. So, they may need a little extra grace in your interaction and your understanding.”

Joining Cox is Physician Assistant Ben King, who brings a unique perspective – he was previously a Special Forces medic in the U.S. Army and served a nine-month deployment in Afghanistan.

“We were in a very hostile region,” King said, “and we had very complicated cultural experiences on a daily basis.”

His time in the remote area of Afghanistan—the only access to his 12-member team’s base was by helicopter—was spent assisting in areas underserved by the government or at risk of being influenced by insurgents. He worked in a medical clinic providing assistance to the local population whenever the team was not on a mission.

“We’d see dozens of people a day; they would just line up,” King said. “It was a way to show a good face, show our hearts and minds to the communities around us who were isolated.”

Danger was constant in Afghanistan, King said. When he was called on to give care, it frequently was catastrophic, and his team members were among those who suffered casualties.

When his five-year commitment was up, King decided to get his undergraduate degree, completing it in 2.5 years. Because he enjoyed medicine, he enrolled in the Physician Assistant Studies program at Wake Forest School of Medicine. He graduated this spring and accepted the position at Davie Medical Center.

Cline said King is “ahead of the game in his training” as a result of his experience in Afghanistan. And King said he is pleased to put his skills to use in Davie County, working with acute problems such as heart disease and more common concerns such as strep throat or high fever.

To those who wonder if providing medical help in a North Carolina suburb is as interesting as being in Afghanistan, King offered a simple response.

“I’m not a Special Forces medic anymore. I made a conscious choice,” he said. “I think this is exciting; I’m never bored. And I’m definitely learning a new craft with a great staff.”