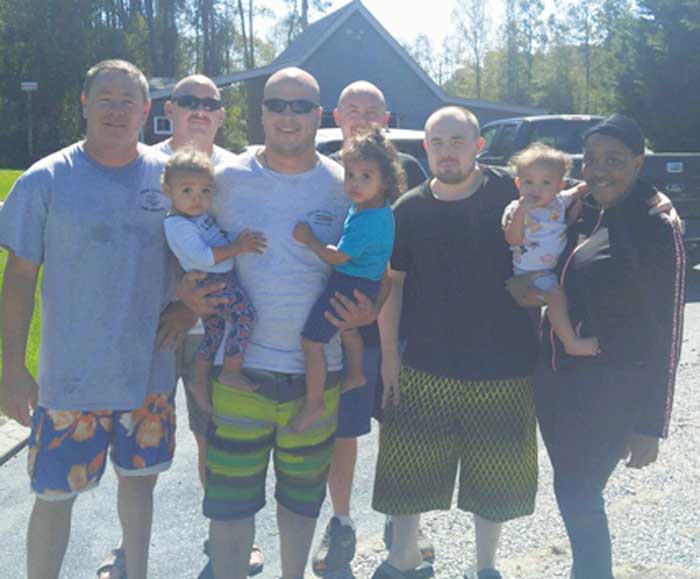 Members of the Davie Rescue Swift Water Rescue Team and a family they rescued from rising floodwaters.

After an on-again off-again couple of days, it was a late Saturday evening when they got  the call. Help was needed.

They hadn’t even made it to Raleigh when they received an assignment – more than 30 minutes away. Myers told the dispatchers their location, the dispatchers replied it didn’t matter. They were the closest unit.

The crew headed to a submerged vehicle on the interstate, but the person in that vehicle had died, so they were diverted to another case in which a car had driven onto what they thought was a black road – but was black water instead.

The Davie rescuers found one guy in a tree, yelling for help. He told them there were two more, and using rope techniques, they made their way to the sounds and found two men hugging a tree, the water already up to their necks. Still another didn’t make it out of the vehicle and died on the scene. It was about 2 a.m.

The creek that had flooded was some 500 yards away.

It was call after call for 24 hours before they got any rest, and that was only for about an hour. Then it was more calls, not as critical, but delivering supplies and life-saving medicines to people who were surrounded by flood waters with no way out.

They also worked in Sampson and Bladen counties.

The missions included a lot of rope work, and in places, they had to wade through the more shallow water. “There were lots of snakes, lots of snakes, crawling between your legs in knee-deep water,” Webb said.

None of the rescuers are fond of snakes, but they persevered.

The men were told to be prepared to be self-sufficient for 72 hours. They were prepared, but found the people of eastern North Carolina hospitable, especially at the Smithfield Fire Department and other remote areas, where they staged from churches or fire departments.

“That crowd, I would invited them into my house,” Blunkall said.

One rescue involved getting three babies and two adults. They were surrounded by water. “The water was still rising as we were doing the rescue,” Webb said.

It may be the first time Davie’s swift water rescue team was involved in active rescues, and all were humbled by the events – especially the kindness they were shown wherever they went. There was also someone at several stops who had some connection to Davie County.

The drives to and from assignments weren’t easy. Roads were flooded. Roads had disappeared in places. They were broken. A normal five-minute trip could take an hour.

“We got a real sense of how these people felt,” Blunkall said.

It means all of the training paid off. “It was an honor to go as Davie Rescue,” Webb said. “It does more for you than it does for them.”

Rescue member Terry Kiestler deployed, as well, as part of the FEMA portable hospital that was set up near Kinston. He was there for 10 days, with the five-bed hospital. They saw 165 patients, and were the only accessible hospital for thousands of rural residents. Critical patients were airlifted to hospitals, others were cared for on the scene.

“We were the hospital on that side of the world,” Kiestler said. “You couldn’t get to another hospital unless you went by air.”

Other emergency workers were stationed at the church where the hospital was set up. He knew it was serious when a Coast Guard admiral visited via helicopter. That admiral was left behind as the helicopter was used to transport a patient.