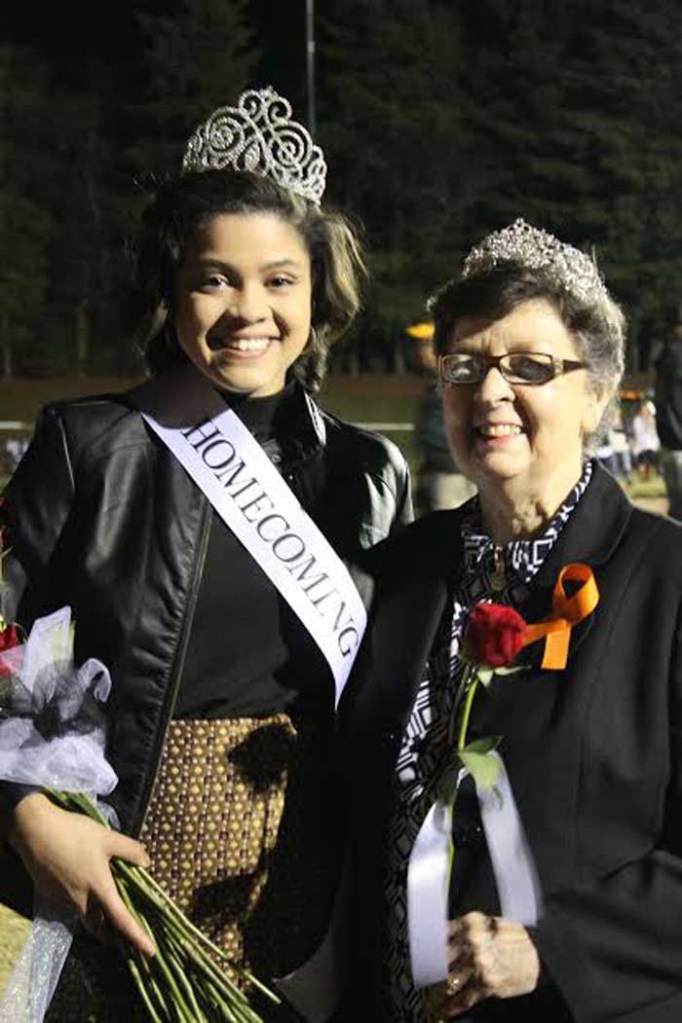 The crowning of a Homecoming Queen at Davie County High School is a yearly tradition that began when the school first opened in 1956 as Davie County Consolidated High School.

With the crowning of Mary Ellen Lewis on Oct. 14, she now becomes part of history and joins a sisterhood of 60 other women who have worn the crown. She is also the last Homecoming Queen to be crowned at the school’s 1200 Salisbury Road location.

Preceeding the introduction of the nominees, announcer Hugh Lee introduced former queens who returned to their alma mater to celebrate the crowning of the new queen.

• Sarah Fortescue, 2015,  lives in Charlotte and is pursuing her dream of helping others by working towards a career in youth counseling. “It was an honor to have been chosen by my peers to be  Davie High School’s class of 2016 homecoming  queen. The opportunity showed me to make the most of every moment, stay true to yourself and be kind to everyone.  With gratitude and kindness,  I pass those things  along to  the new queen as she represents the last graduating class of the original Davie County High School.

• Paige Berryhill, 2014, works at Flow Companies in Winston-Salem.  “My favorite memory of being queen was it gave me the opportunity to apply to The America’s Homecoming Queen’s organization where I got to represent NC and of course Davie County in the Liberty Bowl in Memphis, Tenn. It also gave me the opportunity to visit St. Jude’s Children’s Hospital and open my eyes to the wonders and miracles that happen there and meet a miracle herself.”

• Sarah Ruth Elizabeth Martin, 2008, graduated from High Point University in 2013 with bachelor’s degree in communications.  She travels the world as an international flight attendant for American Airlines and is engaged to be married to ’09 DHS graduate Brandon Hill. “I had the privilege of speaking to all of the fifth grade DARE graduates at Mocksville, Cooleemee, and Shady Grove elementary schools during my tenure as the 2008-2009 Homecoming Queen.”

• Lina Fernandez, 2007, is a student at UNCG working on her bachelor’s in fine arts with a focus on sculpture and ceramics. She says that her best memory of Homecoming was that she was crowned on her 18th birthday: Sept. 28, 2007.

• Molly Whittaker McElroy, 2006, studied biology at UNC-Wilmington and is in physician assistant school at Lenoir-Rhyne University. She married Will in August of this year and the couple has a black lab named Remus.  “I loved riding around the track with my dad after I was crowned.”

• Gina Irby Morgan, 1997, graduated from UNC Charlotte in 2002.  She is a family consumer science teacher at Midlothian Middle School in Midlothian Va. She and husband Tim have five children. “My favorite memory of Homecoming was being escorted by my father and seeing the look on his face that night I was crowned.”

• Melissa Wooldridge Chaffin, 1995, earned a degree in risk management and insurance from Appalachian State University.  Chaffin, who is a homemaker, and husband, Davie County Hall of Famer, Kendall, have been married for 15 years and have four children. Upon receiving the crown, she remembers, “I was honored to have been chosen.”

• Traci Tucker Buddie, 1990, earned a bachelor’s in psychology from Wake Forest where she also met her husband, Mike Buddie. They have two children and live in Greenville, S.C. where he is the athletic director at Furman University.  “My favorite memory of Homecoming was, of course the excitement of winning the crown, but also seeing the pictures in the Enterprise the following week, especially the one of my dear friend Katy crowning me. That is fun to look at now that we are still friends after all those years.”

• Katy Healy Junker, 1989, graduated from NC State University and married Clint. She is an event planner and stay-at-home mother to three children.  This year’s homecoming was especially meaningful because her daughter, Healy, was named third runner up.

• Christy Cornatzer Thompson, 1986  graduated from nursing school in 1993 and works as a leukemia nurse coordinator at Wake Forest Baptist Health Cancer Center.  She is married to Randy, and the couple has two sons, and a daughter.  Their daughter, Carly, was named fourth runner up for 2016 Homecoming Queen.  “My favorite memory of high school was that I enjoyed all four years at Davie living life to the fullest, being a member of the Dancing Boots, and developing lifelong friendships.”

• Kim Foster Stewart, 1981, graduated from Catawba College with a degree in education.  This is her 31st year teaching seventh grade math at North Davie Middle School. She and husband Lefty are parents to two children and have one granddaughter.   “I was honored and proud to represent Davie County.”

• Cindy Smith Charest, 1979, has been married to high school sweetheart, Scott, for 32 years.  They live in Midland, where she works for a small Charlotte based business. The couple has two  sons. “One of the best feelings in the world is to know that I was voted not only by the student body but the senior football players to represent Homecoming 1979 for them. It was an honor that I have cherished throughout my life.  Davie High School will always have a special place in my heart.”

• Lee Ann Craven Homiak, 1977, graduated from NC State University with a bachelor’s degree in textile materials and management. She has spent her career working in sales and customer service in the consumer goods packaging industry as well as pharmaceutical sales.  She lives in Denver, NC, and is married to her best friend, Greg.  She has one stepdaughter, Sarah. “My favorite memory of Homecoming was representing the Davie County High School student body in local area Christmas parades.”

• Donna Hepler Boger, 1976, a majorette and class officer, was a junior when she was crowned.  She is a nurse at Davie Medical Associates, and she and husband Ricky have two children and two grandchildren. She states that she loved her high school years.

• Lisa Creason Newton, 1975, graduated from Davis Hospital School of Nursing and UNC Chapel Hill. She is retired from US Airways as manager of medical affairs and is a part-time RN at Novant Health. She is married to Lawson, and they have two children. Her favorite memory of Homecoming was being crowned by Lynn McCullough Tutterow.

• Betty Ferebee Smith– 1969, graduated from Catawba College in 1974 with a bachelor’s in accounting.  She spent the following 40 years as bookkeeper and office manager for an optometry practice.  She and husband Bryant have one daughter.  “My favorite memory of that night was that Davie won the Homecoming game 28-12 against North Davidson, our only win of the 1969 season, and I was sponsored by Bryant, my husband of 46 years.”

• Susan Hendrix Shoaf, 1968, graduated from Rowan Regional School of Radiologic Technology and was employed as a radiological technologist for 30 years in hospital and family medical center settings. She and husband Ronnie have two children and two grandchildren with another grandchild due at any moment.  “My favorite memory of Homecoming was that I just remember feeling surprised that I won. I was happy and felt honored to have received the votes to win.”

• Vicki Michael Ward, 1967, graduated from Catawba College in 1972 and retired from the N.C. Employment Security Commission in 2004 after 32 years. She is married to Randall Ward and they have two children and five grandchildren.  “My favorite memory was from my senior year. I believe that was the only year that Homecoming Queen was announced at the pep rally that was held during the day. I remember standing in front of the whole student body waiting (along with many friends beside me) for the winner to be announced. I was so surprised when my name was called.  I just cried and cried.  I was so happy.”

• Rebecca Wilson Osborne, 1966, continued on in cosmetology school, and married her high school sweetheart, Edgar Osborne. They were independent business owners of a service station and oil company in Cooleemee for 32 years. She is the mother to three children and five grandchildren. “My favorite memory of being Homecoming queen is the honor of being sponsored by Edgar Osborne and then elected to be Homecoming queen.”

• Audrey Wagner Deadmon, 1965, earned a degree in elementary education in 1970 from Western Carolina University. She taught first grade for 31 years; 16 of those  in Davie County. She married 1967 DHS graduate, Phil, and the couple has two children and three grandchildren. They live in Burlington.  “I remember we beat West Rowan 63-6 on a rainy night and the dance afterwards.”

• Dottie Howard Rowland, 1962, graduated from UNCG in 1967 with a bachelor’s in psychology, and she worked as a social worker until she married Gene in 1969. They started Carolina Truck Centers in 1979 and sold the business upon retirement in 2006. They have two children and three grandchildren. She says that her best memory of Homecoming was the dance with the Catalinas and the slumber party afterwards.

• Polly James Miller, 1956, was crowned as the school’s first Homecoming Queen. After high school, she had training for working in long term care as an activities director.  She worked in several facilities in Forsyth County over a period of 25 years and now serves as a volunteer.  She has two children, Edie Bailey and Todd Bailey, and one grandchild, Ryan Bailey. She is married to Harvey Miller.   “My favorite memories of Davie High were cheering for the girls and boys basketball and football teams.”

A Little Princess continues this weekend