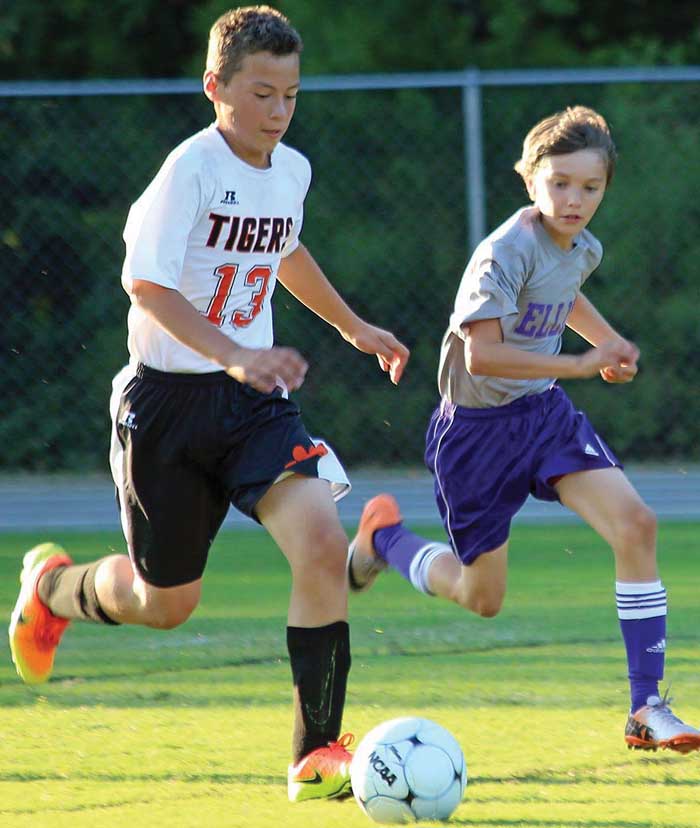 The Ellis girls soccer team got a game-tying goal from Madison Smith and avoided its first loss since October 2015 as the Jaguars left Starmount with a 2-2 tie on Oct. 3.

Rachel Devereaux scored a game-tying goal in the first half. After Starmount went ahead 2-1, Smith came through to make it 2-2.

“We played like we were tired,” coach Leah Reynolds said. “Maybe it was just coming off the weekend or could have just been a case of the Mondays. Hopefully we get our act together (for the next game).”

The final Ellis goal came from Agejew, who moved out from goalie.

“After the ninth goal, the girls really wanted our goalie to score,” Reynolds said. “Emily is a great goalie and a great field player, but because we don’t have a backup goalie, she doesn’t have a chance to play in the field. The girls on defense made sure the ball wasn’t going to get past them so that Emily could score. It took a good 10 minutes before the girls playing forward and midfield could get the ball set up for Emily to score.”

Danny Torres had three goals, while Fredy Hernandez, Ayden Horne, Jackson Lawrence and Brian Reyes had one apiece. Reyes and Horne had two assists each. Adam Szewczyk, Alex Lyons, Lawrence and Jonathan Argueta had one each.

South has won the past two meetings with Ellis. Before that, Ellis (0-4-1) held a five-game winning streak in the series.

“That was the best we’ve played all year,” South coach Russell Hilton said. “Our defense was on point. That was the most aggressive they’ve been. My goalie is Lee Hernandez, and he has to carry us back there sometimes. In this game, the defense (Szewczyk, Tony Olea, Gavin Keaton and Jack Jarvis) really stepped up. Tony is the leader of the defense.”

“Keller made some great saves and kept South from scoring too many more times,” Reynolds said. “Evan and Luke did a great job trying to make shots on goal, but just couldn’t get anything in.”

The checkers weren’t equal when South’s boys visited Starmount on Oct. 6, but that didn’t keep the Tigers from making a game of it. They gave an undefeated team all it could handle in 3-2 defeat.

Not only did South compete, it jumped out to a 2-0 lead behind goals from Torres, who has 12 goals in seven games. Keaton and F. Hernandez had the assists.

The Rams cut it to 2-1 by halftime. They scored in the first five minutes of the second half, and they scored the game-winner with 15 minutes remaining.

“They’re a really good team,” Hilton said after South fell to 2-5. “Those were the first two goals scored on them all year. They were really impressed with us. They were better than us, but we came out aggressive. We just couldn’t hold on to the lead. We’re getting better and putting it together on the field.”