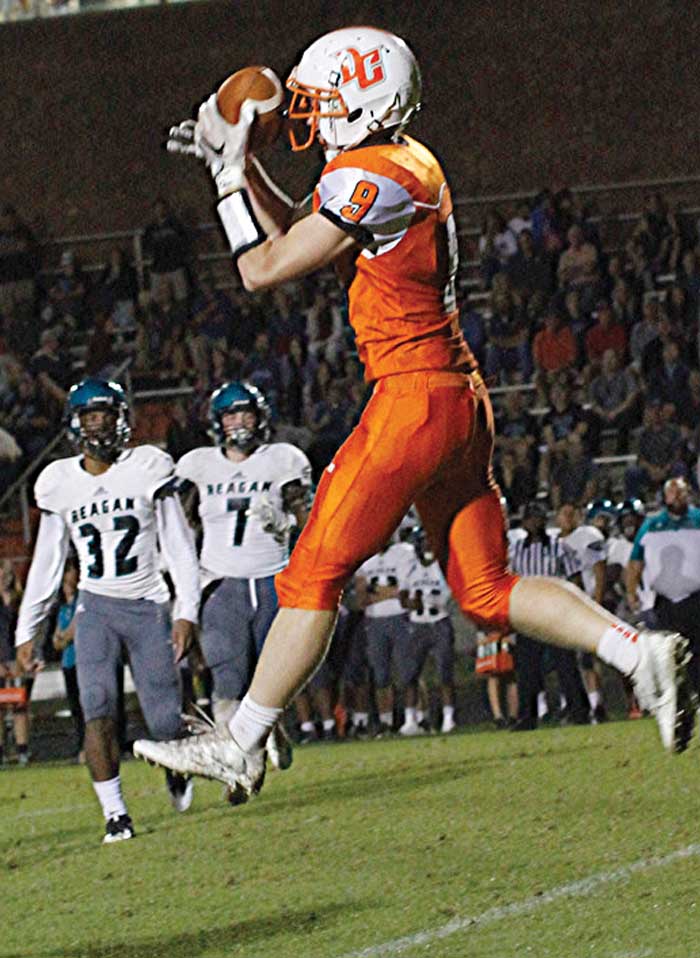 Tyler Roberts goes up for a catch.

Davie’s varsity football team got punched in the mouth in the opening minutes of Friday’s home Central Piedmont Conference game against Reagan.

But the War Eagles did not blink. They responded with a series of haymakers and shredded Reagan 39-7.

Davie (6-1, 2-0 CPC) is off to its best overall start in four years, its best league start in five years, and it stopped a three-game losing streak to Reagan. The last time Davie was 2-0 was 2011, when it went on to tie Mt. Tabor for first place. That was Davie’s last CPC title. Conversely, Reagan (2-5, 0-2) is mired in its first four-game losing streak since 2010, the year before coach Josh McGee arrived.

“We’ve had our fair share of struggles (over the past three years),” senior left tackle and fourth-year starter Luke Pratapas said. “This season we’ve finally got some good rhythm going. It’s pretty exciting to start off the season 6-1 and 2-0 in the conference.”

Reagan came out in the wildcat formation. On the fifth snap of the game, running back Mashion Powell busted a 53-yard run to the Davie 9. Three plays later, Jesiah Carlton completed a 3-yard jump pass to Theandre Hymon, and Reagan had a 7-0 lead. It was the only pass during an eight-play drive.

“They came out in double tights and we hadn’t seen that on film,” Davie coach DeVore Holman said. “Yeah, they took it to us (early), but our coaches made adjustments, our kids communicated with our coaches and we were able to slow down what they were doing.”

“It’s a 48-minute game,” Pratapas said. “You can’t let little things at the beginning of the game get to you and get you down, because that’s when bad things start happening.”

It was the only hiccup of the game for Davie’s defense. Reagan only managed 69 yards on the 21 plays that followed Powell’s long run, and Powell gained 18 yards the rest of the night.

Davie’s shake-and-bake freshman running back, Adrian Cranfill, went off for 327 yards in the previous three games. But he could not find daylight on this night, so sophomore Peyton Hampton seized the spotlight. Hampton found his mojo on his third carry, thundering 26 yards, and he churned for 49 of 74 yards on a 10-play scoring drive on Davie’s first series. On third-and-goal from the 8, quarterback Chris Reynolds found Beau Byerly in the end zone. From the muddle-huddle formation, Reynolds ran it in to give Davie an 8-7 lead and trigger a run of 39 unanswered points.

Davie has two future stars at running back. If you didn’t know that already, you know it now. Hampton, who was limited to 108 yards over the three previous games, flourished to the tune of 140 yards on 17 carries. His previous varsity high was 88 last year at Parkland.

“Peyton’s had an ankle bothering him, but he seems to be getting better and better each day,” Holman said. “If you’re getting ready to tackle him, you better prepare yourself for a big load.”

On Reagan’s second possession, linebacker Cody Hendrix knocked the ball out of Powell’s hands and Hite Merrifield recovered at the Reagan 23. Jared Griggs would drill a 40-yard field goal. No news there. The senior is 8 for 9 on the year to tie for sixth for most field goals in a season. It’s also the most FGs in nine years (Michael Rowe hit 10 in 2007).

“Coach (David) Wooldridge has helped me out all year,” Griggs said of the former UNC punter and the greatest kicker/punter in Davie history. “(He says) keep your head down and touch your toes. I say that before every kick.”

A sack by linebacker James Boyle led to a Reagan punt. On the first play of the second quarter, Cooper Wall ran a crossing route and took a medium pass 30 yards to the end zone.

Reagan was offering meager resistance. Broc Barnette and Jack Little combined on a tackle for loss, Little had a blind-side sack on the next play and an 18-yard punt set Davie up the Reagan 45.

When Reynolds connected with Tyler Roberts and Mason Wilson on back-to-back plays, you thought, “Chris is getting into one of those grooves.” A 10-yard completion to M. Wilson on third-and-10 moved the sticks, and Wall went to the turf to secure a 3-yard TD. Wall has four TD catches in two CPC games and 20 for his career.

After Davie’s ferocious defense forced a three-and-out, Reynolds and Beau Byerly hooked up three times in a span of four plays. Then Reynolds rolled right and threw a sidearm bullet to M. Wilson, who dove to make a 14-yard catch in the end zone. When Reynolds completed a two-point pass to (ready for this?) Hendrix, a star linebacker who isn’t known for any offense, Davie had a 32-7 halftime lead.

“Cody’s really versatile and can do a lot,” Hampton said. “I mean everybody on this team has their thing.”

Everyone knows Wall is main man out wide, but it’s becoming increasingly apparent that Davie has an array of weapons at receiver. Roberts, Byerly and Wilson have all had terrific moments.

“I saw Chris scrambling and I knew he was going to make a good pass to me,” said M. Wilson, who had a team-high five catches. “My knee’s been feeling better (after missing the first two games). This is the best it’s felt since I injured it, and I was ready to play against Reagan. We hadn’t beaten them in four years. It was one I wanted to win bad.”

“Mason is getting back into playing shape,” Holman said. “It has taken him a little time to get there, but he’s making plays for us.”

In the first half alone, Reynolds was 15 of 23 for 184 yards and four TDs. In the first halves against the Reynolds Demons and Reagan, he is 34 of 46 for 453 yards and seven TDs, without an interception. Try beating that. Due to Holman calling off the dogs the past two weeks, Reynolds is 3 of 5 for 31 yards in the second halves against the Demons and Reagan.

One more thing: The four TD passes tied a school record. It happened for the 11th time in Davie’s 61-year history, and Reynolds achieved the feat for the third time.

Reynolds’ lone completion in the second half was one of his best. He placed it over a linebacker and in front of a DB, and Roberts went up to snag a 17-yarder on fourth-and-6. Moments later, Hampton rolled 8 yards to cap the scoring.

Several of Hampton’s runs saw him run over defenders like a contact-seeking battering ram.

“Peyton is a hard worker,” Pratapas said. “He’s one of those guys that’s not afraid to get in those big linebackers’ faces, lower the shoulder and take it to them. It’s nice having the big power back to go with Adrian’s quickness and shiftiness.”

“The o-line did a great job,” he said. “P-Rob (Robertson) stepped up in his second start of the year and did his job. Everybody across the line did their job, and that’s how we got the win.”

After Jalen Redmond and Hendrix stoned Powell for a 2-yard loss, Reagan quarterback Gabriel Hollingsworth fired a sideline pass. Merrifield sped over and snatched it as if it was meant for him – and tightroped the sideline in the process. It was the sophomore safety’s fourth pick, or half the team total. Matt Nesbit added an INT in the waning seconds deep in Davie territory.

“Hite looked like he was catching a fly ball that was hit in left-center,” Holman said. “Initially, I didn’t think he could get to it. Somehow, he found his way to it.”