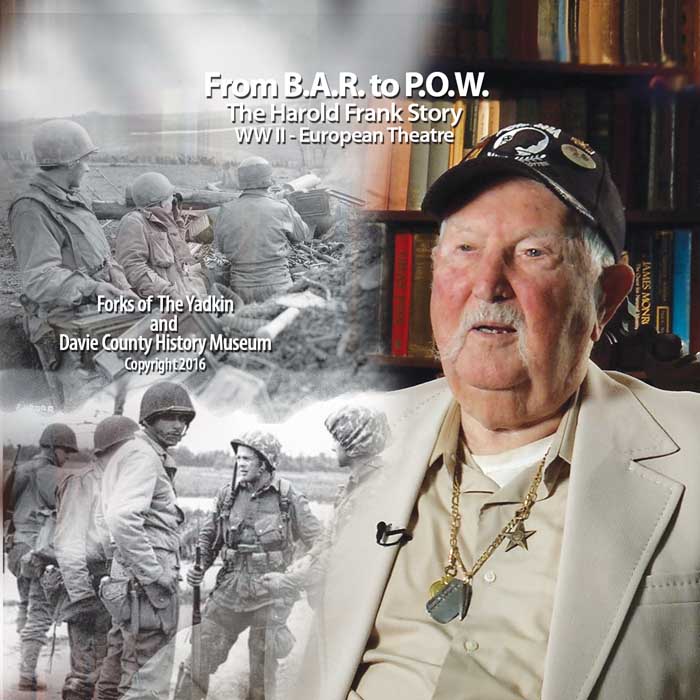 Harold Frank, the World War II prisoner of war, was honored once again as a documentary about his experiences previewed at First Baptist Church of Mocksville on Sept. 24.

Titled “From BAR to POW: The Harold Frank Story,” it was produced by Mark Hager and the Forks of the Yadkin and Davie County History Museum.

PFC Harold Frank was a member of Company G II Battalion 357th Infantry of the 90th Division, the “Tough Hombres.”

Frank, according to Hager, fought with distinction during World War II across the Cotentin Peninsula including battles of Cherbourg, Merderet Bridge, Gourbsville, Hill 122 and Beau Coudray.

He was wounded in the shoulder on July 7, 1944, while leading a patrol to try to find two lost US infantry companies – behind German lines. He fought for nine hours before running out of ammo and being captured by the Germans.

He joined some 200 others captured from the 90th Division. He was sent to Stalag IV B POW Camp in Dresden, then to a work camp 10 miles away at Klotzsche Air Field, where he remained for 10 months.

Frank survived the bombing of Dresden on Feb. 12, 1945 and two other major air attacks on the airfield.

Hager said there is one common statement resonating from the numerous interviews with World War II experts from around the world.

“It is a miracle that Harold Frank survived World War II and that he is still with us today,” Hager said. “It was an honor to produce this documentary and I especially thank Spurgeon Foster, Lake Phelps Grain owners Brian and Wesley Foster, Mocksville Rotary, and other Davie County residents who joined to make this project successful.”

The debut was well attended. As well as museum board members Betsy Cochrane, Linda Leonard, Johnny Marklin and David Gilbreath, the event brought in area law enforcement and military veterans, who were recognized at the conclusion of the preview.

“It’s amazing how such a small county has contributed so much to the history of this state and nation,” Hager said.

Copies of the documentary are available buy making a donation to the museum at the museum office in Downtown Mocksville, off Depot Street in the Leonard building.