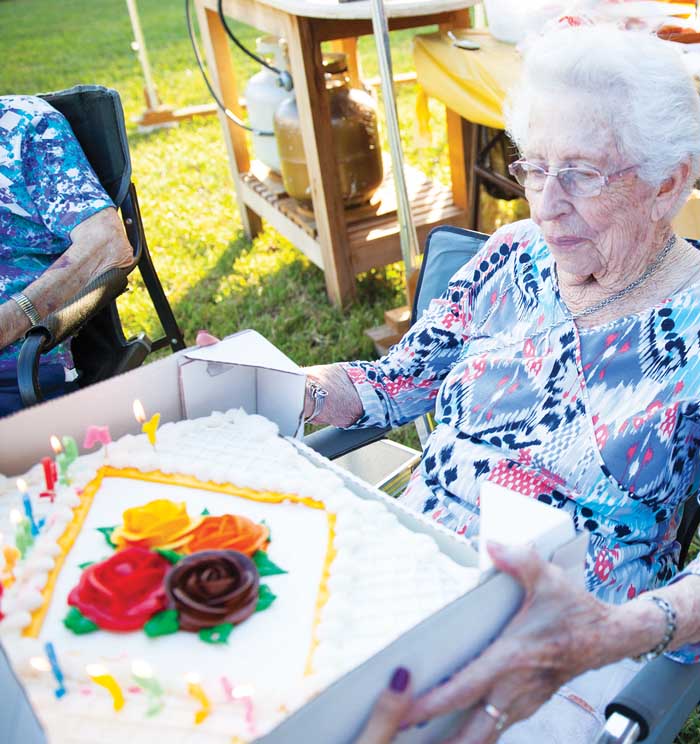 Edith Grubb with her birthday cake.

Edith Grubb turned 96 years old Friday, Sept. 30 and her family had a gathering for her located by a beautiful, still pond with a landscape that looked like a Timberlake painting.

She lives in the house on the hill where she raised her three sons and one daughter.   The late Clifton Grubb was her husband and he passed away in 2012.  Many of her family members live close by while some live just on the other side of the pond.

Edith is lucky to have such good caregivers. Her family members take turns spending time with her, also.

One of her caregivers, Myra Ireland, has been working for the family for seven years, first taking care of Clifton Grubb and then caring for Edith.

Ireland says Edith loves to play cards. She used to play Kings in the Corner but now Skipo seems to be her favorite.

“She is a serious player,” says Ireland. Edith will belt out a loud laugh every time she beats Ireland at a game of cards, and that is almost all the time.

Margaret Brown is also one of her caregivers.

Edith flew in an airplane from her home to Florida once. On that same trip she was going to get the chance to ride in a helicopter but it wouldn’t start. She said glad it happened then and not while they were in the air. She seemed to be fascinated observing her world from an aerial view.

The afternoon was lovely. The warm sun cast a beautiful glow through the trees and the comfort of the shade provided a cooler spot.

Hotdogs were on the grill with the best homemade chili I’ve ever had waiting to be spooned over the top.

I believe I counted four big black pots hanging over open fires. Oyster stew, chicken stew, vegetable soup and pinto beans were ready to fill up bowls and no one was too shy to dip in for seconds or thirds.

Edith’s birthday cake didn’t have 96 candles but they were lit and someone had to whisper in her ear to blow out the candles.  “Oh”, she said, and leaned forward and began to blow them out.

Helium balloons were gathered by the table where a red umbrella was creating shade. Many assorted flowers, cards and wrapped gifts adorned the table. A big smile came on her face when she opened a box of Estee Lauder perfume. “I just used the last of mine today,” she said.

Edith worked as a seamstress at Monleigh for many years.

Her son, Den Grubb, says she did farm work by working in the cotton and tobacco fields. “She was a hard worker and a good cook.”

Den remembers sneaking off to the creek or pestering his sister and he would have to go outside and pick his own hickory “switch” so his mother could switch his legs.

Gary Grubb says his mother has “always been there and always took care of us.  She was friendly to everybody and still is. She made yeast rolls every Sunday. A big pan of them and half would be eaten before we sat down to eat.”

Carl Grubb remembers he always teased his mother by saying she was always beating on him. He said she was strict. When I asked what he would get in trouble for he just smiled and said, “There were too many to tell.”

Her only daughter is Annette Foster and she said her mother taught her morals and values. “She was strict but kind and good to all.” Annette was attentive to her mother while she was opening her gifts.

As the sun lowered behind the trees, a young boy could be seen with a fishing rod standing by the pond. The relaxing celebration was coming to an end. I’m sure when Edith put her head to her pillow that night she had a big smile on her face. This was her day and it was a good day.