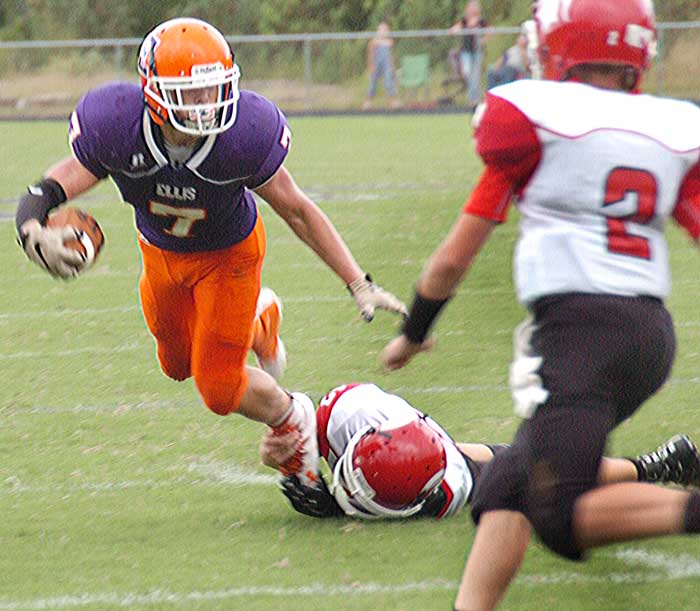 It’s not just that South Davie’s football team is 3-0. It’s how the Tigers have gotten to 3-0.

After squeaking past Thomasville 8-6 at home in 2015, South traveled to Thomasville on Sept. 21 and pounded out its biggest rout in eight years, 43-0. The Tigers put up 30-plus points for the third time while registering the most points in three years (South beat Forbush 49-27 in 2013). This marked the biggest blowout since 48-0 at South Davidson in 2008.

Thomasville’s defense was determined to not let South control the game on the ground. So what did quarterback MJ Holleman, receiver Jack Reynolds and the offense do to counter the strategy? They flourished through the air.

“They rushed so many (defenders), we didn’t have that many rushing yards,” offensive coordinator Germain Mayfield said. “Instead of running the ball, we threw a bunch of now routes and quick passes, which is an extension of the running game.”

Reynolds made a breathtaking, 37-yard catch on a fourth-and-long play.

“It was overthrown and he goes up with one hand and pins it against his helmet and brings it into his body,” Mayfield said. “It was ridiculous.”

Ben Crenshaw (38-yarder), Isaiah Lytton (18-yarder) and Bumgarner (15-yarder) had one catch each. Holleman and Clifton Dickerson ran for TDs. South was also superb on defense.

But the star of the show was kicker Guillermo Garcia, who did something practically unheard-of at the middle-school level by booming a 30-yard field goal. He’s been turning heads with frequent extra points over two seasons, but this was his first field-goal attempt in a game. And man, did he flaunt his leg.

“It had 15-20 yards to spare,” Mayfield said. “Even the officials were like: ‘Wow, what grade is that kid in? Who is that kid?’ You know where the scoreboard is at Cushwa Stadium? He kicked one extra point that went halfway up the scoreboard.”

“He hit that scoreboard so hard it sounded like it put a hole in it,” head coach Perry Long said. “I said: ‘Good gosh almighty.’ In practice he hits 47s all day.”

For good measure, Garcia sent two kickoffs to the end zone for touchbacks.

“They hit inside the 10 and rolled into the end zone,” Mayfield said. “(Last summer) we got him a stand and gave him a football. He plays in an adult soccer league, too.”

Ellis isn’t just winning. The Jaguars are winning with ease. They used their punishing ground attack to overwhelm visiting Central Davidson 42-12 on Sept. 21 in the first-ever meeting between the teams.

After Central punted on the game’s first possession, Ellis pounded its way down the field and scored on a short run by Tate Carney. Early in the second quarter, the Jaguars forced a punt and Ellis’ offense went right back to work. Za’Haree Maddox’s 30-yard scamper around right end put Central on its heels. On fourth-and-goal from the 10, Carney rumbled to paydirt. Beavan Arey drilled the kick, and at 14-0 with 3:56 left in the first half, Ellis was well on its way to 3-0.

Although the Jags surrendered points for the first time this season, they scored the most points in 15 games (Ellis beat South Davidson 43-8 in 2014). It enjoyed the biggest blowout since 40-0 over Brown in 2014.

Twice North Davie has struck first. But twice the North lead has failed to translate into victory. Visiting Lexington regrouped at halftime and turned back the Wildcats 13-6 on Sept. 21.

Xavier Evans went 35 yards on a sweep to give North the 6-0 advantage. “He read his blocks and found a seam,” coach Timmy Allen said.

Lexington tied the score on a 30-yard run. Then North had not one, but two TDs called back by penalties. First, Evans broke multiple tackles and roared to the end zone, only to see it erased by a block in the back. Then Blake Jenkins rolled out and completed a 10-yard pass to Kristian Lyons. That would-be TD was negated by offensive pass interference.

The half ended with the score 6-all. “I think that would have shifted all the momentum going into halftime,” Allen said of the called-back TDs.

The Wildcats began to unravel early in the third, fumbling in their own territory, but the defense came up with a stop, thanks in part to a sack by Lyons. But after a North punt, Lexington’s quarterback got around left end for 33 yards. The one-point run was successful as Lexington took the 13-6 lead.

North did mount a threat in the fourth. Jenkins hit Lyons for 33 yards on a third-down pass, and 15 yards were added to the end of the play by a late-hit flag. The Wildcats got as far as the Lexington 12, but a fumble with 2:34 to play gave Lexington the ball and ultimately left North with its first 0-2 start since 2013.

In the second half, North found tough sledding against Lexington’s defense. “They made some good (halftime) adjustments,” Allen said. “They kept stacking the box and we couldn’t handle it up front.”

The season-opening 16-6 loss at Tyro was similar to this game. Evans’ 50-yard run provided a 6-0 lead at Tyro, but that was it for North’s offense. Despite the loss to Lexington, Allen said his boys showed toughness.

“We played a lot better (than the Tyro game),” he said. “I see improvement from all the guys. We’re going to get one. We’re right there. We’ve got a lot of seventh graders playing and they’re taking their lumps. But they’re working hard and getting better every week. We’re going to be alright.”