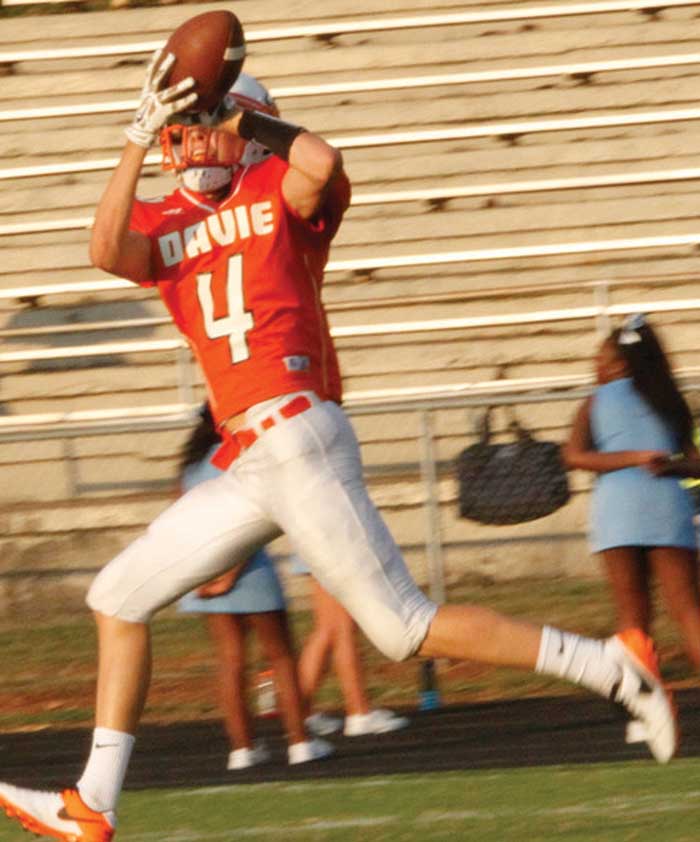 With Adrian Cranfill having played his way into a varsity role at running back, freshman Josh Robinson will be a valuable player for the rest of the season on Davie’s junior varsity football team.

Robinson will now carry the ball quite a bit, and he and Julian Howard will need to be consistently effective for the freshman-heavy War Eagles to win in the Central Piedmont Conference.

In Thursday’s final nonconference game, Robinson (75 yards on eight carries) and Howard (42 yards on 10) combined for 117 yards as Davie staved off visiting Hopewell, 22-8.

“Josh has been important defensively the whole time,” coach Blaine Nicholson said after Davie (2-2) scored a season high on offense and also had its best scoring defense game. “He’s our nickel safety; we put him in on third-down situations. He’s got pretty good ball skills. This week he looked really, really good (at running back). He’s going both ways since he’s not a starter on defense and he’s outperformed expectations. Now we expect a lot out of him as we move into conference.”

Quarterback Alex Ratledge had a solid game, rushing for 48 yards on nine carries and completing 4 of 7 passes for 131 yards and two touchdowns.

Playing their first game in two weeks, the War Eagles faced an 8-0 deficit after the first quarter. But they closed within 8-6 on a 66-yard hookup from Ratledge to Evan Little.

“Evan is really quick, a crisp route-runner and he got behind the guy (on a deep post),” Nicholson said.

The half ended with Davie in front 14-8, thanks to Ratledge’s 40-yard pass to Zach Gantt. Davie converted a two-point play when Ratledge tossed to Little.

“Just like in the West Rowan game, Zach got behind two or three defenders and Alex kind of threw it offbalance,” Nicholson said. “And Zach came down with it.”

The score remained 14-8 through the third quarter. Ratledge had a hand in three scores, including the game’s final TD on a running play.

Little, Gantt, Howard, Bryceson Cozart and Peyton Sherrill had one catch each. Although Davie averaged 5.7 yards per rushing play and 27.6 yards a completion, it did not play to max potential.

Meanwhile, a defense that was giving up 24 points a game enjoyed its finest hour.

Lenny Adame had a first-half interception. Samuel Hendrix had a second-half interception and a nice return. Defensive back Anthony Deters and linebackers Logan Dingler, Hunter Meacham and Austin Shaver earned praise from the coach.

“They tried to isolate Deters a few times on the one-receiver side on deep routes, and he was in great position almost every time,” Nicholson said. “He could have gotten a pass interference if he didn’t play it the correct way, but he did.

“Dingler got home on a couple blitzes. Meacham is playing a new position (at outside linebacker) because we’re trying to take advantage of his speed, and he played really well with it being his first game there. Shaver had a couple big plays.

“We had a lot of gang tackles. We did a good job of getting to the ball.”

Davie pulls away for blowout win