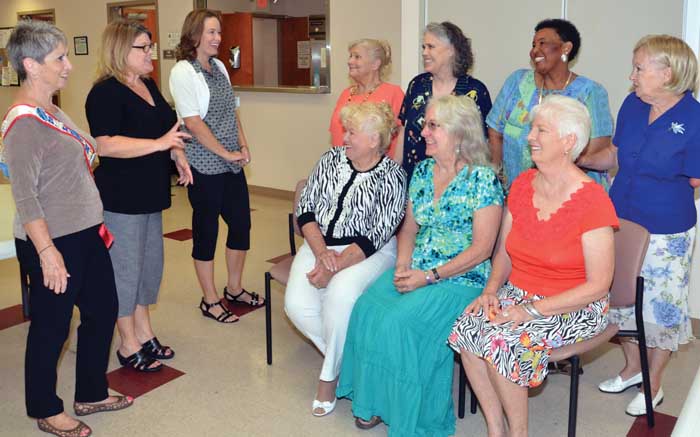 Carol Yow will be glad just to be able to walk onto the stage.

After retiring from a career at Belsouth, she became ill, unable to walk or talk.

She does both right now, and drives to the Bobby H. Knight Senior Services Building in Mocksville, where she is a volunteer and participant. She also does crafts at Somerset Assisted Living, where she recovered after being diagnosed as having a reaction to medication.

The pageant will be held at the Merony Street Mocksville site on Thursday, Sept. 29 at 6:30 p.m. A social with refreshments will begin at 5:45. Free tickets are available at senior services.

Garcia won’t be able to bring all of her props onto the stage, though. Weapons aren’t allowed in county buildings.

A hunter, her portion of the show will include a nice deer she bagged in Davie County, along with a grilli (camoflouge) suit. She made her own.

She learned how to use a gun and hunt at an early age, and has taken it up again after years as a Red Cross instructor, including a stint teaching scuba diving at Miami Beach.

A master swimmer, Garcia has been a volunteer with Stonecraft Ministries, Habitat for Humanity and on a mission trip to Germany. She also likes to bowl and teach her grandson about Jesus.

Why join a pageant when you’ve never participated in one?

Garcia says she’s somewhat shy, and it’s a way of “stepping out.”

And she’s letting people know that women her age hunt, too.

Caldonia Evans worked as a school bus driver for YVEDDI, and is a veteran of the Army National Guard. She has been on mission trips with Bear Creek Baptist Church to West Virginia, Virginia and Pembroke. She volunteered for “A Call to Cooleemee,” an effort to provide a variety of services to those in need.

But don’t let the cane fool you. Evans is also a member of the Davie County Senior Services Boogie Brigade. And they, well, they boogie. She’ll strut her stuff during the pageant.

Phyllis Gough is a regular at senior services, regularly volunteering among her other family duties. Retired from editing and publishing newsletters, being a business owner, international marketing representative, music teacher, church organist and housing facilitator, she still finds time for her hobbies, which include music, reading, world travel, painting, dancing and collecting seashells and rocks.

She will play the piano during the talent competition. Contestants will also appear in gowns during the introduction.

Tricia Hardy stays busy, self employed at MAD Ceramics, retired after a career as a mechanical artist. She also drives and rides horse-driven carriages.

She has been involved in Whips & Wheels Driving Club, Rowan Crafts, the Sauratown Trails Association and the Golden Triad Ceramics Guild, serving in leadership positions in each endeavor.

Donna Harris is the one person all families need. She’s the one who creates books of family photos, stories and recipes. After a career as a customer service agent, she does this for enjoyment. She also likes walking, hiking and adult coloring.

A member of New Hope Church, she volunteers there as well as with the Derrick Davis Cancer Center, American Heritage Girls and Feel Good Friday.

Diana “DJ” Stine plays the Appalachian Mountain dulcimer, which she has done with The Dogwood Blossoms Dulcimer Ensemble and the Camel City Dulcimer Club. She volunteers by playing her music for shut-ins and at bedsides at caregiving and comfort venues.

Stine is a member of the V-Point Ruritan Club, owner of Outback Joe’s Army/Navy Store, and a U.S. Navy veteran.

“Look at it like you’re playing dress up,” she said at a recent rehearsal. “There will be cheering, but it’s nothing to be afraid of. Even if you forget or mess up, just keep smiling and continue. The most important thing is to continue to smile.”

She told the contestants not to listen to anyone who tries to make fun of or discourage them.

“I promise you, you won’t regret it. There’s only one crown, but I’m sure you’re all winners. You’re making history for Davie County because you’re in the first pageant.”

Davie Senior Services Director Kim Shuskey quickly acknowledged that this will be an ongoing project.

“I like being the first and I’m always open to new adventures,” Yow said, who earned her college degree after retirement. “I want to share my story and inspire others.

“I thank God every day for my life. I believe all things are possible with God,” Yow said.

Teacher of the year tries to instill confidence