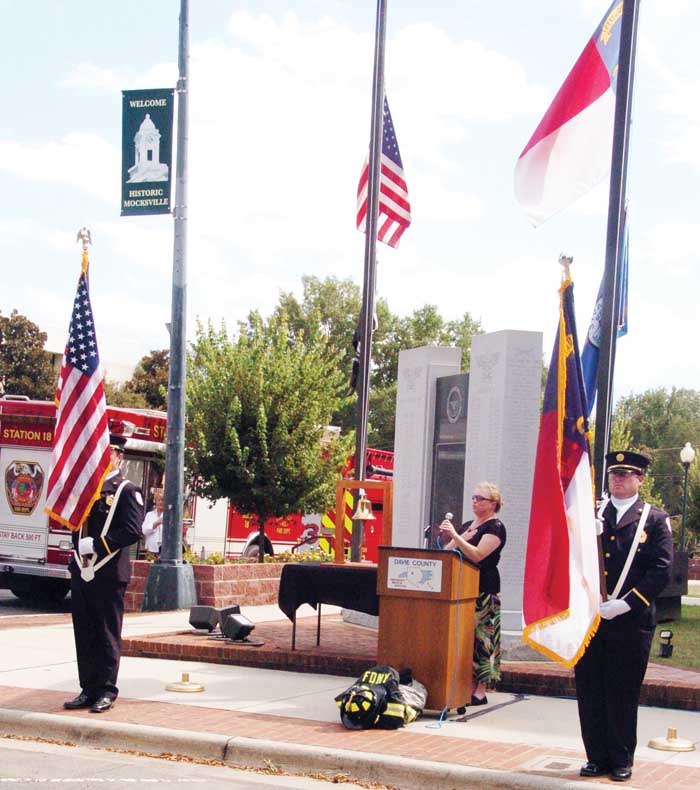 The days and months that followed brought out the best in humanity.

Davie Sheriff Andy Stokes had the attention of several hundred people Sunday afternoon at a remembrance ceremony on the square in Downtown Mocksville.

“What shocked us the most, was that our way of life was under attack,” Stokes said. He said it is a way of life that protects one’s right to look and think differently, to worship as they choose, to voice their opinion without fear of reprimand from the government.

“They (terrorists) wanted to put fear in our hearts and terror in our minds. They were in for a surprise.”

Americans, he said, were brought to their knees – but not in fear – in prayer.

“Those prayers were answered in the images of rescue workers with dedication and courage who placed themselves in harm’s way. They were running into the fire while others were running away.

“To the rescuers, it was business as usual,” Stokes said, placing the public’s safety ahead of their own. Americans, Republicans and Democrats, blacks and whites, became more patriotic.
American flags were everywhere.

“As Americans, we will not live in fear,” Stokes said.

New Union Methodist Pastor Eric Lineberry, also a pastor with the highway patrol and firefighter’s association, remembers the 2,977 who lost their lives on 9/11, the more than 6,000 who were injured, and the thousands more who were close to the victims.

He marvels that an estimated 16,000-18,000 people were in the Twin Towers before airplanes were purposefully crashed into the sides, setting them ablaze before collapsing.

“We come to remember because we haven’t forgotten,” Lineberry said. “The attacks brought us together as one because we believed in something greater than ourselves.”

“Touch us in a way that we will never forget those who sacrifice for us,” Jones prayed. “May we stand in the name of Jesus … to serve freedom around the world. Be with those who protect us, and their families. We thank you for freedom, for liberty … and the knowledge that ultimate freedom and liberty is through the shed blood of Jesus Christ.”