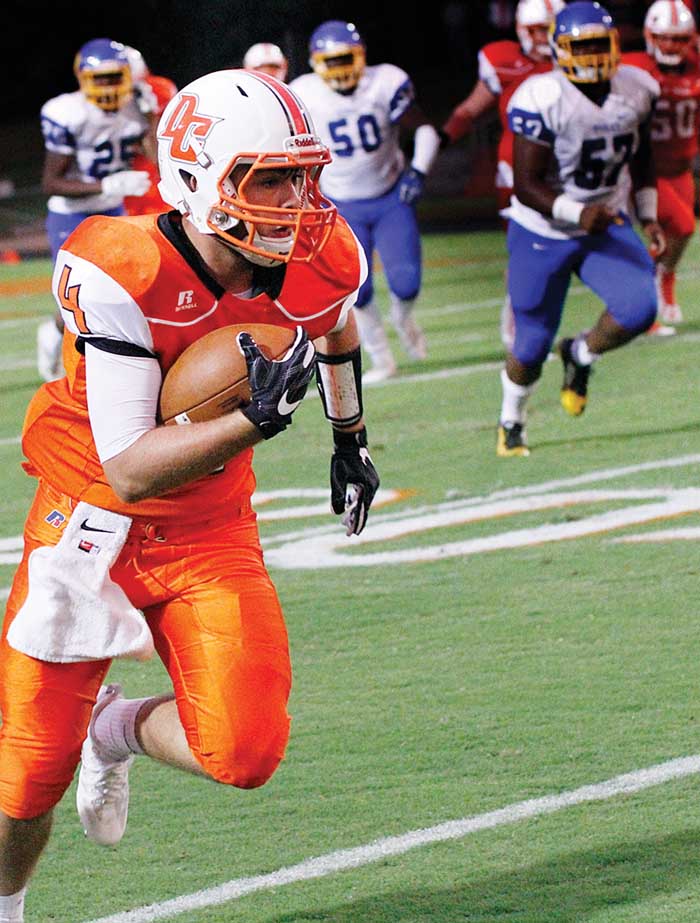 Two Jared Griggs field goals provided a 6-0 lead over the favored Panthers. Running back Peyton Hampton was gashing them for 19, 9, 11 and 8 yards. Cody Hendrix, James Boyle, Spencer Wilson and the defense were forcing punts on their first two possessions.

But then one big play wiped out Davie’s lead. And moments later, one huge injury sucked the air out of the stadium. And then a mere game took a backseat to Cooper Wall’s health and Davie faded in 32-6 defeat.

Dudley, a 4-A power that has won three state championships in the last 10 years and is one of the favorites to win it all in ‘16, improved to 3-0. The War Eagles slipped to 2-1.

“We’re going to learn from this,” Davie coach DeVore Holman said. “That’s why we play the competition we play. We’ll be fine.”

Hendrix, who had 19 tackles the week before against West Rowan, made his presence known on Dudley’s first snap, tackling running back Ezra Perkins for a 4-yard loss. Boyle and Wilson sacked Hendon Hooker two plays later.

Davie was in control of field position and went to work from the Dudley 37. Chris Reynolds connected with Cameron Thomas for 20 yards and Hampton’s 11-yard run gave Davie first-and-goal at the 2. You’ve got to get seven points in that situation, but Davie had to call on Griggs on fourth-and-goal from the 1 and the kicker made it 3-0.

“We got off to a strong start,” Holman said. “However, we got down to the end zone and couldn’t stick it in and had to settle for three. Against a powerhouse like Dudley, you have to take advantage of any opportunities. But we came away with some points and I was happy with that.”

Angel Perez-Hunt broke up a third-down pass and Dudley punted. Penalties on the Panthers helped Davie travel from its 22 to Dudley’s 15 – roughing the punter and then two pass interferences against the defender covering Wall. Griggs drilled a 32-yard field goal to make it 6-0.

“Overall, I am really proud of the way our guys fought because this is exactly the type of game we needed to get ready for the (Central Piedmont Conference),” Holman said.

Dudley was dazed, with Broc Barnette demolishing a jet sweep for a 9-yard loss to put the Panthers in third-and-19. But without warning, the game began to change over the next few plays.

On that third-and-a-mile play, Hooker, the 6-5 QB who is headed to Virginia Tech, went deep to complete a 42-yard touchdown to D.J. Crossen, a junior who has committed to UNC as a defensive back. Just like that, point-after kick erased Davie’s lead, 7-6.

“They got us on two long balls,” Holman said. “I thought we were in perfect position and had a chance. When something like that happens, we have to talk to our kids about going to the next play. We can’t think about what just happened.”

On the next play from scrimmage, the 6-2 Wall climbed the ladder over the middle. He was about to make a beautiful reception, but the ball came out a split second later on a Brion Seagraves hit to the back. Wall was down – he wasn’t moving – and War Eagles’ hearts were their throats. He lay on the ground for a long time. Assistant coach Robbie Fox waved out medical assistance, parents Brent and Kerri walked out to stand by their boy and he was eventually placed on a stretcher.

“Initially, he was having problems feeling with his nerves,” Holman said. “It was very emotional for our guys. Obviously, they are concerned about their teammate and all that stuff. He was talking, but he was scared. He was scared because initially he couldn’t feel anything. But he got through it.”

Through social media, good news spread throughout the stadium during the second half. He spent two nights in the hospital. The diagnosis: One cracked rib and an air pocket above his lung that was healing on schedule.

“The good news is, he’s going to be alright,” Holman said. “I love him like he’s my own. I understand he’s got movement and feeling back. It seems that all is well.”

With Davie minds on their dynamic playmaker, the War Eagles, who were facing a formidable challenge and were up to the task for a quarter and a half, gradually unraveled from that point on.

On a first-and-goal play from the Davie 8, Boyle stopped Hooker for a 1-yard gain. Hooker allegedly threw a punch after the play and the future Hokie was ejected. But just when it seemed the War Eagles had caught a major break, Hooker’s replacement changed the game.

Sophomore Richard Monroe’s first play was a long ball, and it resulted in a 22-yard TD to Thomas Young. With the score 14-6 at halftime, the War Eagles were in contention – but they were wobbling.

“He’s the brother of the starting quarterback,” Holman said.

“I’m extremely proud of our guys for overcoming adversity, especially for a young quarterback who is only a sophomore,” Dudley coach Steven Davis told the Winston-Salem Journal. “He was ready when his number was called. I knew I wanted to throw the ball right away when he came in, just to see where he was. And he made us all look good.”

“A couple turnovers gave them a short field and they capitalized on it,” Holman said. “One of my messages to them is that we’ve got to protect the ball at all costs.”

The game featured two heralded QBs. But Hooker was ejected and Reynolds was a shell of himself while playing on an injured ankle. Reynolds’ streak of consecutive games with a TD pass ended at 14. Garrett Benge (17 straight games in 2006-07) and Brad Corriher (15 straight in 2004-05) rank 1-2 in that category.

One play following the fumble, Zareik Rush, the game’s top rusher with 73 yards, got free for a 25-yard TD as Davie’s deficit was now 20-6 as Monroe’s two completions were both for TDs. Dudley blocked a punt, took over at the Davie 16 and quickly made it 26-6. A Rush run capped the scoring with 4:27 remaining.

Davie’s leading rusher in ‘15, Reynolds was no threat to run on that ankle. And then he was without his No. 1 target.

“Obviously, Chris wasn’t 100 percent,” Holman said. “Everybody could see that. He was able to stand in the pocket and throw, but he’s not mobile. I debated on whether to play him tonight. He wanted to give it a shot. I probably left him in there a little bit too long. He’s got to get healed up. I’ve got to look at it like this: He’s got to be ready to go come conference time.”

Josh Hall took over at quarterback and could be used Friday against North Rowan.

Meanwhile, Davie was limited to 170 yards and went 2 for 13 on third downs. There were positives. It held an opponent with a ton of talent to 232 yards. One bright spot was Thomas, a senior receiver who had two catches in his season debut. Another was junior Mason Wilson, a junior receiver who had three receptions in his varsity debut. Another was senior Tyler Roberts, who had team highs in catches (four) and receiving yards (50).

“Mason (who is coming off a knee injury) just hasn’t been able to get in shape,” Holman said. “Cameron gives us another option. We’re glad to have him back as well.”

• Good news came over the weekend as Wall, who had 15 catches for 271 yards and two TDs in the first two games, returned home from the hospital with spirits high.

His father, Brent Wall, said: “Hopefully he’ll be back in full action in a couple of weeks.”

Cooper tweeted: “There is no place I’d rather live than DC. The amount of support I’ve gotten in the last 24 hours is beyond special.”

Another Cooper tweet: “Minor setback for a major comeback.”

• Davie failed to score a TD for the first time in six years, or 63 games. The last time was the 2010 4A championship game, when Hillside blanked Davie 40-0. “They blitzed their linebackers a lot and we struggled sometimes getting off our front blocks and picking up the linebackers,” Holman said. “They’re a fast, big and physical team.”