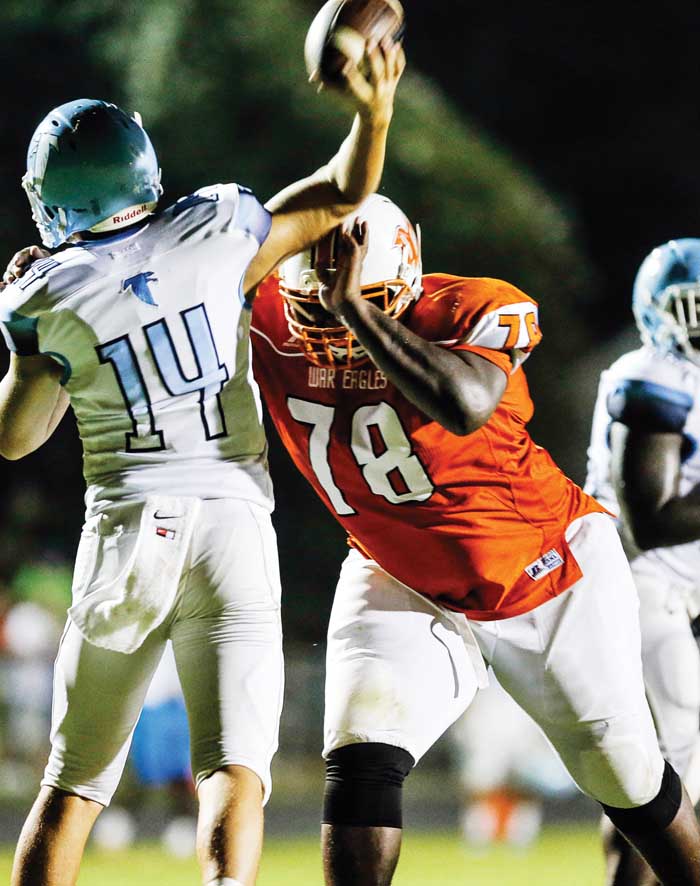 It mattered not one bit because Cody Hendrix and the defense put on a scintillating show as Davie (2-0) dismantled visiting West Rowan 41-0 Friday to put an emphatic end to the War Eagles’ seven-game losing streak to the Falcons.

It’s not like Davie’s offense didn’t show up. It scored on six of 13 possessions. But the quarterback-receiver duo did not put up ridiculous video-game numbers that fans have become accustomed to. Davie overwhelmed West anyway as the Falcons’ punters struggled something awful, Davie kicker Jared Griggs had a night to remember and Hendrix, a tough-as-nails junior linebacker, delivered an outrageous performance with 19 tackles.

“Oh, Cody was killing it tonight,” fellow linebacker James Boyle said. “Every time I thought I was about to make the tackle, Cody came out of nowhere and made the tackle. He was getting after it. He looked great out there.”

What’s more amazing about Hendrix’s performance is eight of his tackles were for losses.

“He played so hard, man,” coach DeVore Holman said. “He’s staying off blocks and getting his hat on people. I mean, I can’t ask him to do much more than that.”

“I told (linebackers coach Dave Hunt) when he left the office: ‘Make sure you have 10 sharpened pencils (to chart Hendrix’s stats),’” defensive coordinator Tim Devericks said.

The Falcons (1-1) had five first downs, four rushing yards on 30 attempts, misfired on 15 of 21 passes, went 1 for 14 on third-down conversions, failed on two fourth-down tries, averaged but 20 yards on nine punts and fumbled four times, although they recovered each one. And those numbers aren’t typos.

It’s early in the season, but it seems there’s no comparison between where the Davie defense was in 2013-15 and where it is now.

“We worked all week and I wanted to really prove to everybody that the game (at Page) wasn’t a fluke,” said defensive tackle Spencer Wilson, who returned from a hamstring injury after sitting out at Page. “We expected it. It’s a special defense, that’s for sure. It’s something different. This is the Davie County defense that everybody knew years ago, and it’s back, baby.”

Boyle had 12 tackles, including three for loss and two caused fumbles. Lineman Anthony Olmedo had seven tackles. Nose tackle Ronald Wilson and S. Wilson had two tackles for loss each, and S. Wilson also forced a fumble. Outside linebacker Jack Little and safety Hite Merrifield had two pass breakups apiece as Davie turned back 14 West possessions and recorded its first shutout in three years, or 28 games. The last one was 50-0 over Parkland in ‘13.

“They couldn’t get a run game going, so they started trying to get the pass going and our secondary played amazing,” outside linebacker Kinston Whitener said. “We’re mentally smarter than we were last year.”

“We rotated about every two or three plays,” Holman said of the DL. “I was glad to see Spencer be an impact player (after being injured).”

“Jack rotated at outside and inside (LB) all night,” Devericks said. “Jack had a heck of a game on special teams as well.”

In the first quarter, Merrifield broke up a third-and-10 pass to force a West punt. Little got his hand on a third-and-13 pass, causing an incompletion, and West would turn it over on downs at the Davie 23.

After a scoreless first quarter, Davie attained the momentum with a vice grip when a West punt was shanked for minus-4 yards to the West 29. It was only just the beginning of West’s punt struggles. Whitener applied pressure on the first negative punt.

“I ran up and he was intimidated and kicked a shank,” Whitener said. “He didn’t want to kick it because he knew it would get blocked.”

Two plays later, Reynolds and Beau Byerly connected on a corner route for 26 yards to the West 1. Reynolds, playing through a twisted right ankle that he suffered at the bottom of a pile, limped in from the 1 to put Davie on the board.

After J. Olmedo and S. Wilson stuffed QB Kortez Weeks (seven carries, -26 yards) behind the line, the ball went off the side of the punter’s foot and netted all of five yards.

“We wanted to see if (the punter) could stand in there to the pressure, and fortunately he got some shanks off, and then he dropped one,” Holman said.

On first down from the West 21, Reynolds pumped, the defensive back bit and Wall was wide open for a touchdown that provided a 14-0 lead.

“The score was supposed to be 21-17 (in favor of West, according to the Salisbury Post’s prediction),” center Bailey Sloan said. “Keep doubting us, that’s what we like.”

On fourth-and-10 from the Davie 30, Weeks looked for running back Jovon Quarles near the goal line, but Merrifield knocked the ball out for an incompletion. “They talk about punching the pocket and knocking it down,” Holman said. “Sometimes that’s as good as an interception.”

On third-and-18 from the West 32, Boyle got his big mitt on Weeks and yanked him down for a 17-yard loss. Later, West had to punt from its end zone. The punt banged off the personal protector. Boyle caught the ricochet in stride and walked in for a TD return of four yards to make it 21-0.

“All I could think about was I could actually return this,” said Boyle, who scored his first TD since a fumble return as a freshman in ‘13. “That was so exciting. I’m hoping to get some wings on Monday.”

“I told you, we have concentrated really, really hard on special teams, and it’s showing,” Holman said. “(Special teams coordinator Matt Gould) will have a couple of T-shirts for the special teams players of the week. I’m proud of those guys because we’ve got to win that phase of the game.”

With 32 seconds left in the first half, Griggs etched his name in the record book by nailing the longest field goal in 17 years (48 yards). It tied for the second-longest FG in Davie’s 61-year history. Assistant coach David Wooldridge hit from 50 in ‘00 and from 48 in ‘99.

“I was praying for a long field goal,” Griggs said. “When (Holman called for the field goal unit), my mind went completely blank. I just had to do my thing. Amazing. Best feeling in the world.”

“He was hitting (long FGs) in pregame, so we let him go for it,” Gould said. “And he came through.”

“He’s so pumped,” Holman said. “And the more he’s pumped, the better he plays.”

The most talented team in Holman’s four years as head coach continued to pour it on in the second half. West’s Deyquan Byrd made a diving interception at the West 15, but West’s backup quarterback, Payne Stolsworth, returned the favor on the next play. R. Wilson, a 300-pound sophomore who one day is going to be a massive force, popped Stolsworth as he released the ball. Angel Perez-Hunt snatched his first career INT and returned it 20 yards to the West 12.

“Ronald made a big improvement from week one to week two,” Devericks said of the nose tackle. “They were trying to cut him in the first half. He adjusted his mentality and started demanding a lot of double-teams. The center tried to cut him and Ronald dodged the cut block using his technique. He was right in the quarterback’s face, so he had to throw it before he was ready.”

On third down from the West 10, Reynolds and Byerly connected on another corner route, with Byerly making a diving, juggling catch in the end zone.

“I feel like every time I throw the ball to Beau it’s on a corner route,” said Reynolds, who went 15 of 30 for 153 yards and two TDs. “And he’s always there at the right time and he always gets enough separation.”

Byerly has three TDs in two years, all on corner routes.

“(Reynolds) puts it in a perfect spot,” Byerly said. “I kind of reached out and brought it back in, fumbled it a little bit and locked it up with two hands.”

West punted after a Boyle sack. On third-and-15, Reynolds shoveled it to running back Peyton Hampton, who shook three defenders with one move and picked up 14 yards. Hampton moved the sticks on the next play. Fans wondered which receivers would step up when Wall wasn’t setting the world on fire, and several guys contributed in this one. Reynolds completed a 15-yarder to Will Shepherd and a 10-yarder to Tyler Roberts to set up Hampton’s five-yard TD run. Griggs capped the scoring with a 34-yard field goal.

Wall and Hampton had four catches each. Byerly and Roberts had three apiece. Brandon Hendricks had one. Hampton has been a nice weapon as a check-down option.

“On film in practice every day, I’ll see Peyton sitting and looking at me,” Reynolds said. “So I learned if I see linebackers bailing, he’ll be sitting there and I can shovel it to him. He’s a great escape route.”