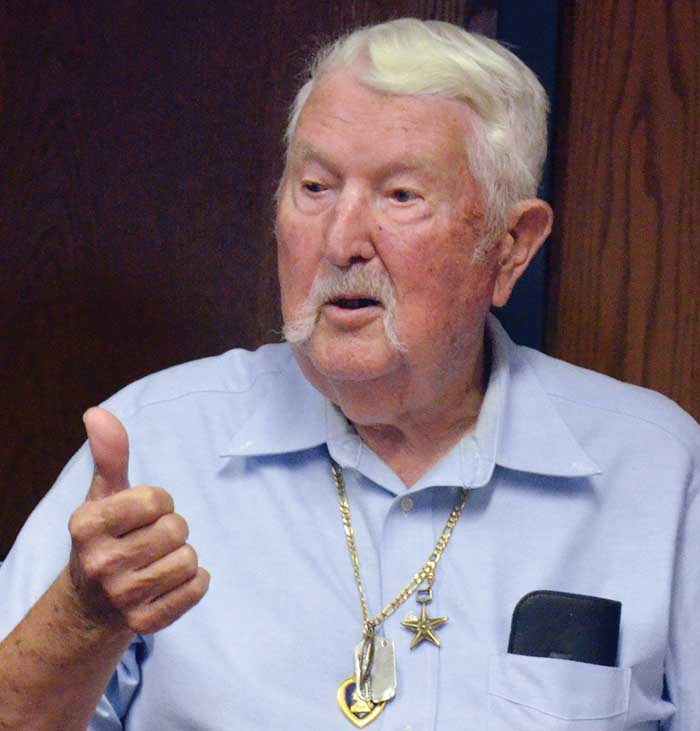 Give Harold Frank a microphone, and he’ll talk. People listen, too.

The presentation came before a packed house at a county commission meeting.

Frank talked about his capture by the Germans in France, a little about his time in a German prisoner-of-war camp, about his release.

Acknowledging that he didn’t want to get too political, he also vowed to do his part to protect the Second Amendment.

World War II, he said, was the last war the United States allowed itself to win. “They let us fight World War II, and they didn’t handcuff us.”

He talked about a German prison guard whom he befriended.

Frank asked that guard: How did Hitler gain power?

The guard told him Hitler’s men came around asking every household if they had guns. If they did, the government registered them. Six months later, they came back around and took everyone’s guns.

That German guard, 70-something years ago, told Frank not to let the United States take the guns away from its citizens.

Frank, who said he had never been in trouble other than for fighting roosters, has always had guns. He recently got to shoot a BAR, the gun he was an expert on during the war.

The Forks of the Yadkin & Davie County History Museum is working on a documentary of Frank’s life, set to be released next month.