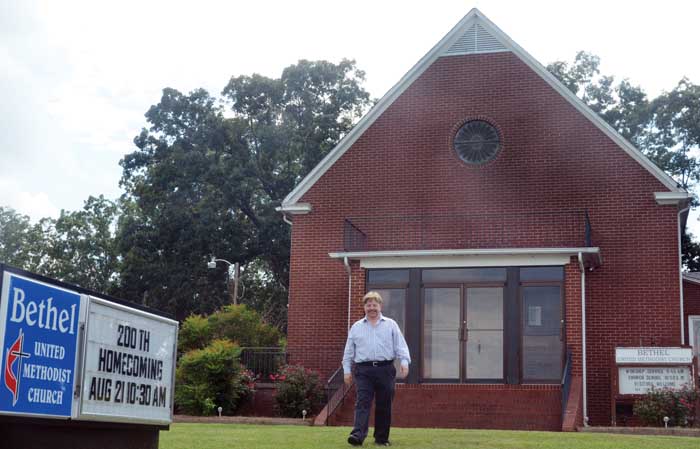 Pastor Tony Owens in front of the historic Mocksville church.

No, he doesn’t live there. But members of his family have attended the church in Mocksville for generations. And yes, he does consider the members of the church as family.

On Sunday, the church will celebrate its 200th anniversary. District Superintendent Dr. Jeff Patterson will deliver a message at the 10:30 a.m. service. The Brad Ratledge Band will provide music, followed by a covered-dish lunch. Former members and visitors are welcome.

“When we were growing up, going to church was a part of life,” Essex said. “If I don’t go, I feel like I’m missing something.”

He remembers when the church, on appropriately Bethel Church Road, had two entrances – one for men and one for women.

“This is where I found the Lord,” Essex said, “and everywhere I look, I see family, not just blood family, but people who are close to me.”

That sense of family appeals to Tony Owens, as well, who has been the minister at Bethel for 11 years.

“Being part of a family, a community, is appealing,” Owens said. “They’re very welcoming and mission minded. They understand things need to happen outside these four walls.”

Owens was baptised in Lexington by Carl Lane, who soon thereafter came to preach at Bethel. Owens likes that fate.

“These are the most wonderful bunch of people I’ve ever been around. They work together. It’s a wonderful sense of family. If there has ever been an ill word spoken, I don’t know about it.”

The church has long-time members like Essex, and new ones who keep things fresh, Owens said. Although not as large a congregation as it once was, they accomplish a lot.

“It’s something to see what a church this size can do,” Owens said. “We have a ball. If you reach one person other than the people who are here, you’ve been a success. Everybody gets together and just gets things done.”

Somtime prior to 1816, a Methodist Episcopal Church was established at the site, about a mile east of Downtown Mocksville. The first recorded meeting at “Olive Branch” was in March of 1816, and members later met it Moore’s Meeting House, a log building with a dirt floor and seats hewn from logs.

In 1833, a group of the congregation formed First Methodist in Downtown Mocksville.

Between 1868 and 1873, Bethel Methodist Protestant Church was organized on four donated acres of land.

For years, ministers traveled via horse and buggy from Yadkin College.

Improvements have been made periodically since that time – both on site and in the community.