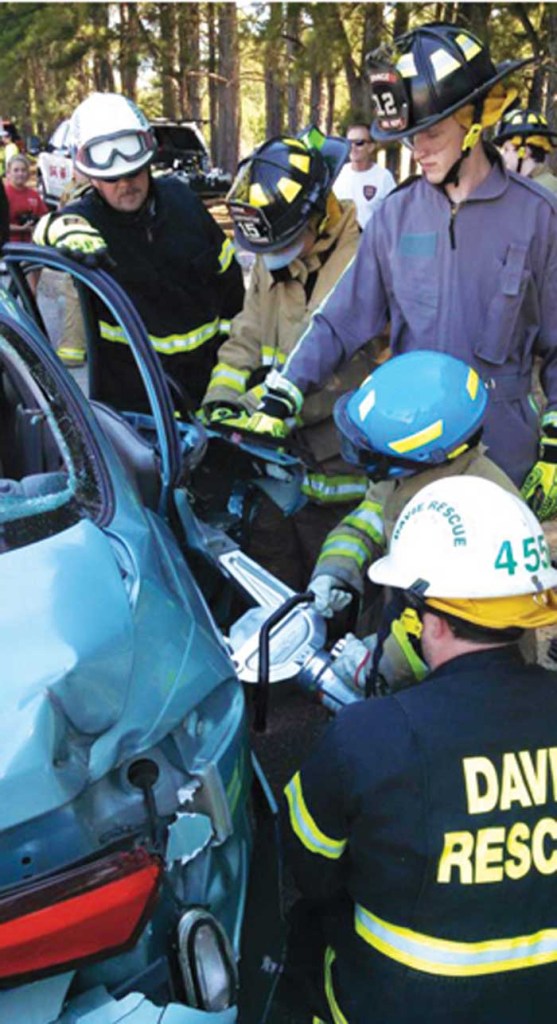 Participants in the Advance Fire Department youth camp learn how to extract a victim from a wrecked vehicle.

The department will hold an ice cream social and reunion for fire campers, junior firefighters and cadets on Aug. 16 at the Station 12 firehouse on NC 801 in Advance.

Capt. Ronnie Robertson invited parents to join their campers to learn more about the junior firefighter program which is open to rising sixth grade and older students who are not yet 16.

Junior firefighter training is ongoing through the school year and centers on members learning to assist on the fire ground locating and by retrieving equipment from the fire trucks, preparing air pack bottles and helping with rehabilitation efforts.

Juniors do not actively fight fires.

“Safety is our first priority,” said Robertson. “Not all juniors suit up on calls, but the ones who do work under the close scrutiny of adult firefighters.”

Chief Rodney Miller said the Advance Fire Department relies on volunteers. “It’s either that or we have to hire professionals at significant cost to the taxpayers.”

Josh Collins is the latest firefighter to graduate from the junior firefighter program. He works with the cadets.

Miller is a former junior firefighter as is Robertson and captains Tommy Meyer, A.J. Burton, and Rick Hockaday.

“Undoubtedly, we’ll get more juniors from our 4th Annual Fire Camp which was our most successful yet,” said Robertson. “We had 23 campers.”

Robertson said: “We put almost as much emphasis on our campers and juniors having fun and we do on them staying safe.”

The fire camp program was organized and run by Andrea Stewart, Myers, Hockaday and Robertson.

Composting business vows to be a good neighbor