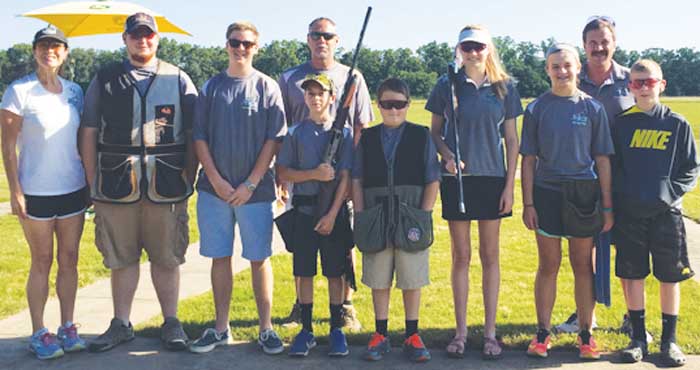 With more than 13 trap fields, the historical trap complex played host to more than 300 shooters from North Carolina and surrounding states.

Wyatt Armsworthy dominated the Sub Jr. event while teammates Zeb Pilcher and Will Anderson scored their first 25 straight set in the 200 target competition.

This year the Adult/Jr Paired competition was a hit. Carolina Clays members Jonathan and Lydia Pilcher, tied with Jeff and Wyatt Armsworthy with a combined scores of 327.

Following the AIM championship Adult/Jr teams proceeded to field 12 for the final the shoot off. A full round with parents and junior shooters on the trap line.

“Feeling the excitement in the air, everyone started and finished the 25 bird shootoff strong,” Allen said.  Lydia and Wyatt put the high scores up followed by the adults (whom were not showing to be under any pressure). At the end of the round Jeff and Wyatt Armsworthy edged out the competition to take home the trophy.