County says no to Dollar General in Advance 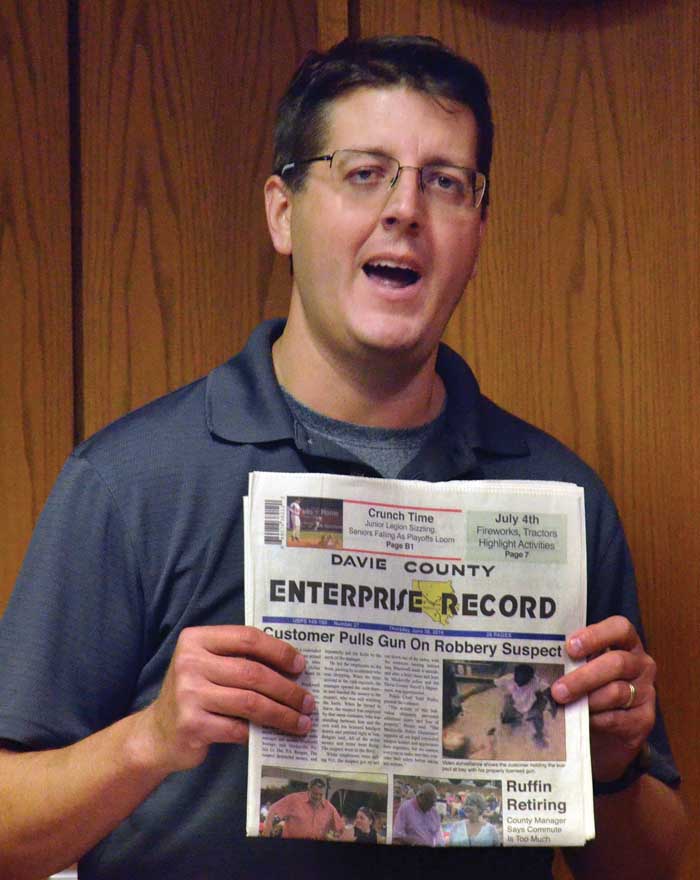 County commissioners took little time Monday night in denying a rezoning request that would have allowed a Dollar General store to be built in the heart of Advance.

That followed a 4-1 recommendation for denial from the county’s planning board.

Venture Properties had asked the county to rezone 1.4 acres from residential to highway business with special conditions. The property is on 2046 NC 801 S., near Sowers Lane.

Ten Advance residents spoke in opposition of the request; two, both representatives of Venture Properties, spoke in favor of the rezoning.

Commissioner Mark Jones, who made the motion to deny the request, said it would not: promote the public welfare, protect the historic character of the neighborhood, be compatible in size with nearby buildings, and have detrimental effects on the quality of life of residents.

Speakers talked about increased traffic on a curvy road that is already busy, especially when nearby Ellis Middle and Shady Grove elementary schools begin and end.

During those hours, “ … you have to make an appointment to get out onto (NC) 801,” said Mona Potts, who lives on Markland Road. “Dollar General … we just don’t need it … offers nothing we don’t already have or is within five miles.”

There is a Dollar General in the Bermuda Quay shopping center in Bermuda Run, about five miles away. There are two in Mocksville, one in Cooleemee and another on NC 801 near US 601 North.

Diane Costner, who lives on Peoples Creek Road, said she thinks such a store would hurt the sense of community. “We really love our little town and we’ve gotten burned a lot lately,” she said.

Hank Wade lives on nearby Sowers Lane, and emphasized safety, most of it based on traffic considering the schools and daily bus travel by the site. “Safety, think about those children. We don’t need it there and we don’t need it in Advance.”

Several speakers talked about the Advance Country Store, about how it is a part of the community and said it likely couldn’t survive if the Dollar General is built.

Dan Robertson of Peoples Creek Road made a different point. “The money that goes to the country store stays in the community.” People in Advance aren’t against business or capitalism, he said. “I think they’ve just chosen the wrong site. No one here is anti-business. It’s just the wrong site.”

The house currently on the property that is in “somewhat disrepair,” according to Davie Planning Director Andrew Meadwell, is historic, the home of a former mayor, said Robert Myers, whose family has called Advance home for generations. “We’re not against Dollar General. It’s about money. They get the money and it’s gone.”

“This is a big deal,” said Debbie Garner of Peoples Creek Road, adding that more “for sale” signs have been showing up in front of properties in recent weeks. “It’s a big box store. That’s not a place for historic Advance.”

Speakers questioned whether there is enough room on the site for a tractor-trailer to deliver goods without causing a danger on NC 801 or in the store parking area.

Joe Everette Jr. presented a detailed report including photographs, all showing reasons he said the rezoning should be denied. He has actively campaigned against the rezoning on social media.

Dollar General stores, he said, appear to  have more crime than most, holding up a newspaper clipping of a customer who had pulled a legal concealed weapon on a suspected robber of a Mocksville Dollar General.

Rainfall runoff would go onto his property, he said. Everette presented written and online petitions with about 400 signatures of people opposed to the request.

Dan Barrero of Venture said the county should grant the rezoning. “Let the people decide with their wallets who succeeds and who doesn’t.”

Venture’s Ronnie Walsh said the company investigated the community, and said it was the right site, with enough room for trucks to enter and exit and without adversely affecting the neighborhood.

Dollar General, Walsh said, is a small grocery store, and would offer a choice to area consumers. The house on the site is “unsafe,” he said, and there are signs that activities had been ongoing on the property the community would not condone. “If there’s a threat in the community, that’s probably it.”

The store would add to the county’s tax base, and it’s the commissioners responsibility to look after all county residents, Walsh said.

“There’s a lot of emotion and a lot of anecdotal information.” With capitalism, businesses compete, Walsh said.

Board chair Terry Renegar agreed that capitalism should not be chilled, but not at the cost of quality of life.

Commissioner Dan Barrett said you have to understand the character of Advance, and adding in traffic and other safety concerns, made the decision easy.

“This is not appropriate for this community,” Barrett said.