Composting business vows to be a good neighbor 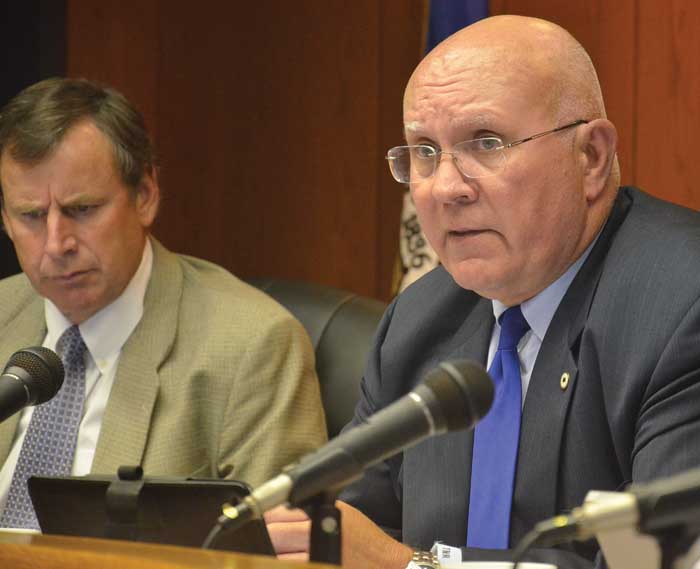 The president of Wallace Farm says his company is dedicated to doing what it takes to be a good neighbor. That means keeping odors from the composting operation off Lee Jackson Drive from bothering those neighbors.

State regulators also say they are committed to keeping those odors from escaping the 225 acres at the Wallace Farm site, land zoned industrial years ago for a potential Unifi plant that never materialized.

“You guys don’t know me, but I’m here to listen,” said Eric Wallace, president of Wallace Farm. Finding the site was years in the making, he said, as it appeared to be far enough away from neighboring properties to cause a problem, “a perfect fit.”

The composting involves taking biodegradable items such as wood waste, food waste and other items, and turning it in windrows until a soil additive free of pathogens is the result. It helps take such items away from landfills, where they cause different problems, and creates a useful product.

But it smells. Sometimes the smell is really bad.

County commissioners heard all about it Monday night, as the board of education asked for $249,494 to pay for air filtration systems at Pinebrook Elementary and North Davie Middle schools and the new Davie High School under construction.

The issue started when Jim Moorefield, project manager for the new Davie High, said he went home with unpleasant smells on his clothes. He expressed his concern to schools superintendent, Dr. Darrin Hartness, that those same smells could get into the “soft” items to be installed in the new school as early as November, things such as carpets and ceiling tiles.

The new Davie High is adjacent to the Gallins farm, which also makes compost, although on a smaller scale than Wallace, which is closer to Pinebrook.

County Commissioner Mark Jones pointed out that the contigency fund in the new high school budget could be used to pay for the system, and that the schools had other monies available.

One speaker to the commissioners Monday said the company responsible should pay the costs.

“I am not here to cause a problem,” Wallace said. The company thought they had more “freedom” here, and is quitting adding some of the materials thought to have caused the smells, smells Hartness said caused a Pinebrook student to vomit as they got off the bus at school.

“We’re going to have to run it like Huntersville,” Wallace said, referring to the company’s original site, which was encroached upon by golf courses and high-dollar developments.

When it first moved to Davie, some of the items that caused objectionable smells in Huntersville were moved here. That wasn’t only because of the Huntersville complaints, Wallace said, but because the  source came from Winston-Salem and Salisbury, and the Davie location was more convenient. Those sources are no longer being used, he said, to try to reduce the odors.

“If you want to know our process, call me. I will be honest and up front. I want my staff to teach kids how to compost,” Wallace said. He said he couldn’t promise there would never be an odor from the operation, but he is committed to getting the level where it doesn’t bother neighbors.

“I’m listening and we care,” he said. “We’re here to be green.” He eventually wants local residents to be able to take things such as yard debris there, and to buy composted materials, as well.

Because the county’s board of adjustments ruled composting as a farming operation, it is not subject to county zoning rules. The state requires that such operations be in industrial zones, and this property was already zoned industrial.

Composting companies do, however, have to be regulated by state environmental agencies, and odor on neighboring properties is one of the things they are committed to eliminating, said Tony Gallagher, branch director for the state’s solid waste section. Several staff members were on site this week to monitor as the windrows are turned, to help identify the sources that are causing the problems and to take other steps to keep the odor from leaving the property.

Wallace said that one of the sources spread the odor as it was unloaded from trucks, before it made it to the windrow. That source is no longer used.

Gallagher said the division requested that Wallace put finished compost onto the windrows, another step to keep odors on the property.

He said it is important for those residents who notice the odor to report it. That helps pinpoint the problem and alleviate it, he said.

Wallace is in the process of establishing a local board to address any issues.

County commissioner Dan Barrett expressed his concern that the process wasn’t made public. Commissioner Jones asked if there are other industrial zoned properties in rural areas.

Several residents spoke during the public comment section of the county meeting.

Shirley Smith said she is concerned about potential toxins leaving the composting facilities and reaching Pinebrook. “Pinebrook School and our homes were here long before Wallace Farms.” She called the smell a “horrendous odor.”

Ted Randolph said the odors could easily reduce property values. “Put our citizens first, ahead of the dollar.”

“By their own admission, they put a smell in the air,” said Marc Moore.

Joyce Neely of Raylen Vineyards said customers sometimes complain, and that having outdoor spaces and events is essential to the success of the company.

“Our success is Davie County’s success,” she said. Customers come from all over, and the opinion they have on Davie County may come from that one visit to the winery.

The complaints may have fallen on sympathetic ears, but there was little county commissioners can do. The issue facing them was whether to pay for the filtration systems at the schools. That decision was delayed until September.

Time is important because it will take six to eight weeks to have the air filtration systems installed, and the county board of education wants that done before the soft materials are installed at the new Davie High.

County says no to Dollar General in Advance