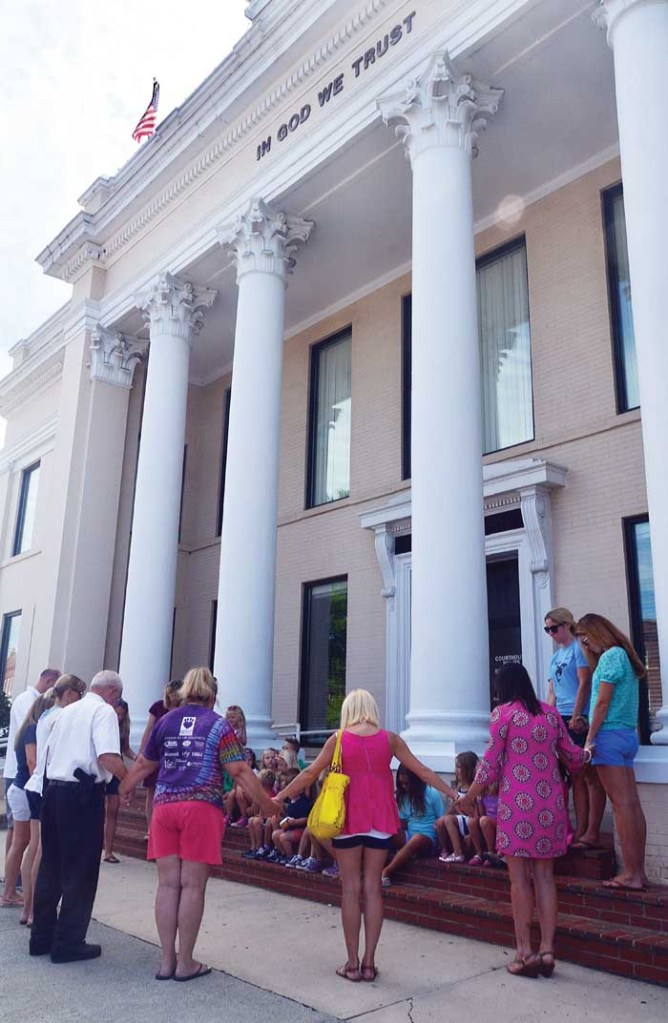 Davie Sheriff Andy Stokes prays for officer safety in front of the Davie County Courthouse with a group of Advance residents.

It started as a conversation in a Bible and book club in Oak Valley.

They were reading “The Power of A Praying Parent.” The police shootings in Dallas had just happened.

One of the chapters was on how to get children in volved in public service.

They came up with the idea of Pizza for Police and Cupcakes for Cops, and last Friday, a group of parents and children visited the Mocksville Police and Davie County Sheriff’s departments.

They delivered much more than cupcakes and pizza. They had money to go to a fund to help officers in need. The children had written cards to the officers, cards that said things such as Tatum, a 10 year old:

What you do is awesome. You protect us from the mean people. No matter what some people say, you do an absolute awesome job … Be optimistic, no matter what.

The visit improved officer morale, Davie Sheriff Andy Stokes said, adding that it had been a tough week to be a cop.

“This is one of those rare moments when there are no words,” Stokes said. “This has been a tough week for cops, and ya’ll have made this a great day to be a cop in Davie County.”

At the police department, Chief Todd Penley and his officers gave each of the children a “junior officer” badge.

After coming up with the idea, the parents and children took to the streets, touting their idea and soliciting donations from neighbors.

“It’s a good way to teach our children that there is still hope and light,” said Courtney Randleman.

“We’re praying for them, for their protection, discernment and decision making,” said Robin Myers.

Along with Ashley Hughes and Heather Gladd, the two were instrumental in organizing the event.

“We can’t just talk about it. We have to lead,” said
Hughes.