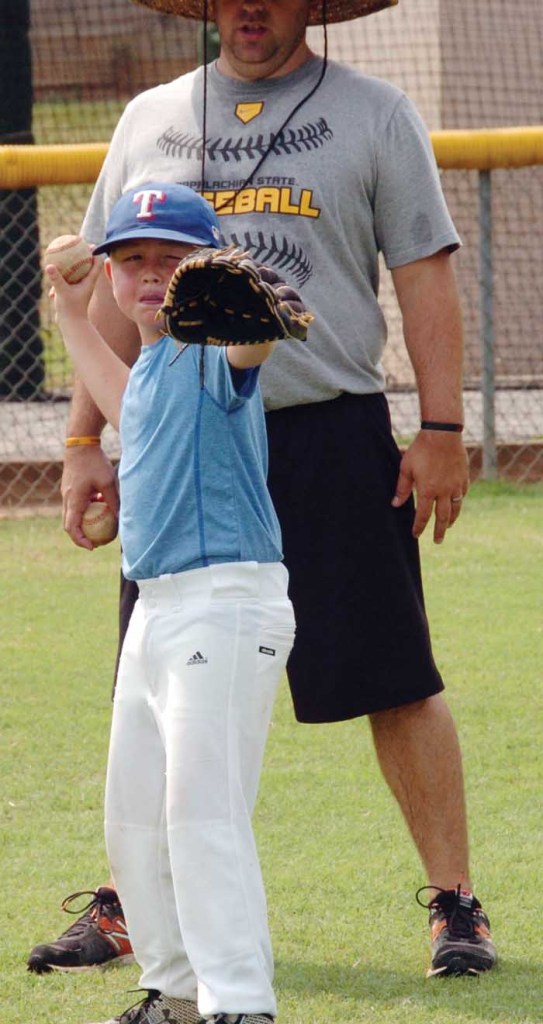 Youyngsters get training in the basics of baseball.

The Tri-Cats Baseball Camp was held June 20-23 for two and a half hours each day at Rich Park for ages 6-15.

Before Byerly handed out awards, Holt, a teacher at North Davie Middle and one of Byerly’s assistant coaches at Davie, offered a final message to the campers.

“I’m going to talk about controlling what you can control,” Holt said. “I was reading an article and it said a major league baseball player was batting about .225 or .230 – not hitting very well at all. The coach said: ‘What is your goal going into tonight’s game?’ He said: ‘I want to have a couple base hits and knock in a couple runs.’ The coach said that is exactly what’s wrong. That’s why he’s hitting .225. He’s worrying about things that he can’t control. When you hit the ball, you can’t control if it’s going to be a base hit or not. You can hit the ball hard four at-bats in a row and hit it right to four different people. Then the next game you could hit one off the end of the bat that flares into right field and falls for a single. Then you might get jammed and hit a little dribbler down the third-base line that you beat out for an infield single. Really, you weren’t successful in those two at-bats even though you got on first base.

“So what can you control as a baseball player? You can control how you hustle, how you prepare on deck for your at-bat and how to be patient at the plate. You can control your attitude when something goes wrong or when something goes right. You can control how coachable you are. That goes beyond the baseball field. If there’s one thing you get from me this week, it’s control the controllables. Some of you younger ones, that will make more sense down the road. Oh, that’s what coach Holt was talking about.”

Byerly addressed the campers next.

“Make it a goal that you be the next Ross Hoffner or Jalen Scott or Jake Barneycastle,” he said. “I don’t care how far their baseball career goes, what they are as young men will go a whole lot further. You can’t change character. The character that they portray every day is No. 1 top-notch.”

Byerly handed out T-shirts to all 35 campers before giving out the first of three awards. The first award winner was Hunter Daywalt, a rising fourth grader who won the Offensive Award.

“This guy could have won any of the three awards,” Byerly said. “He has a cannon. He really strokes the baseball. He does all the little things. He does not play baseball like a third grader whatsoever. He hustled everywhere.”

“I had the pleasure of watching this kid play when I was umpiring,” he said. “Seeing how he handles himself, he’s very coachable. He does not say a lot – he’s pretty quiet – but on the field he’s pretty spiffy with his glove and he’s got a good future ahead of him.”

The final award – the Coach’s Award – is always special to Byerly.

“This to me is the most important award,” Byerly said. “That’s why it’s called the Coach’s Award. Our winner this year (at Davie) by unanimous decision by his teammates was Jake Barneycastle. That guy came to every practice and every game upbeat. We never heard anything negative in the dugout. He was always the one communicating, always with a great attitude. After practice, he was one of the few guys that every day picked up a rake or a broom. He picked up cups. He was always the one working. All these guys are the very same, but he’s our latest winner. To me, that’s the most prestigious award you can get from your teammates and your coaches.”

Then Byerly announced that Ben Bost was the Coach’s Award recipient. Bost will start kindergarten this fall.

“Not only was he phenomenal on the field, he did all the little things and with the right attitude,” Byerly said. “This guy is not big as a minute. But every day and every station, every second for the last four days, he had a smile, had a glove in his hand or a bat in his hand, wanting to know which to use. He asked me 8,000 times which one do I need? Wherever I said he was going, he went a hundred mph like his rear end was on fire.”