Central Davie alumni ‘meet at the flagpole’ one more time 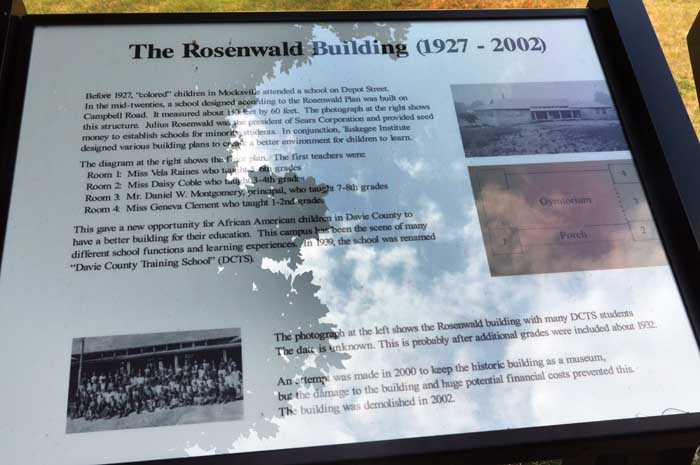 Learn the history of the Central Davie campus at the markets adjacent to the flagpole.

The alumni of Davie County Training School and Central Davie High School are quite familiar with the phrase, “meet me at the flagpole.”

When students attended the school, they would quickly talk with each other between classes and if they didn’t finish a conversation, or if they wanted to visit further, they would say, “meet me at the flagpole.”

It was already known in the school’s culture that he or she meant after school. Meeting at the flagpole has been a tradition since 1942, when the graduating class purchased a flag and flagpole as a gift to the school.

Alumni, local and state officials, former principals of the school, educators, and members of the community all gathered at the flagpole once more on Saturday, June 18 at noon for the unveiling of a new monument.

The structure provides a synopsis of the school’s history.

Records show that Julius Rosenwald, president of Sears Corporation, opened a school for blacks in Davie County sometime in the 1920s.  During the years 1939-1962, the school was named Davie County Training School. The name became Central Davie High School in 1962-1967.

The school closed when Davie County Schools integrated and all students began attending the current Davie High School in 1968. In 2002, the original Rosenwald building was demolished, but other buildings on the campus have remained.

The school was located at 160 Campbell Road in Mocksville, which is now the location of Central Davie Academy.

For the past two years a committee consisting of Clyde Scott, former Davie County School Board member, and his wife Gladys Scott, retired principal of Davie County Schools, Marie Roth, an antiquary of Davie County history, and Magalene Gaither, retired teacher of DCTS/CDHS and impeccable recorder of African-American history in Davie County, met on a regular basis to plan the creation and installation of the monument.

They began the process by meeting with the Davie County Board of Education and gaining their approval to proceed forward with the idea.  The plan they presented also includes archiving some of the school’s memorabilia in a room on the campus of Central Davie Education Center.  This segment of the plan will take place later.

Mr. Scott, a member of the DCTS/CDHS reunion committee and master of ceremony stated, “Our goal has been to provide archives that chronicle the school’s history. The alumni have journeyed through careers that have made local, state, and international impact. We would like to pay tribute to our beginning, and make sure that our descendants know about our history.”

At the conclusion of the program in the auditorium, participants and the audience came outside to the flagpole to observe the unveiling of the new monument and the history recorded on it, and also view the flag that was made in honor of the alumni. Clyde and Gladys thanked the local officials who helped with the attainment of the monument, and also the businesses who contributed to the construction and installation. The program closed in prayer by Pastor Nettye I. Barber (class of 1964).

Since 1942, the original flag and pole became damaged. In 2008, Dewey Hunt, a concerned citizen, noticed the pole was broken and decided to provide a new pole and flag. His communication with Dorothy Graham (class of 1953) regarding the situation inspired her to write a poem, “Meet Me at the Flagpole,” which reflects on the school’s memories, and acknowledges the class of 1942 for installing the first pole and flag.

Meet Me at the Flagpole

Meet me at the Flagpole

A place to meet and secrets be told

Sometimes maybe, a heart was broken

Happy times, sad times all in the past

Just memories of teachers and friends tried and true

Friendship and education for our life to last

From our dear Alma Mater Gold and Blue

We have traveled our separate ways

For some the journey was gentle

Others struggled until their hands were blue

Classrooms demolished and bricks hauled away

But you, dear Flagpole, will never be lost

Some may forget you

And fall by the way

But we are determined

As we stand here today

Whether sunshine or rain

Knowing that whatever betide

Precious memories of you will remain

Forever may you remain at this hallowed spot

For whatever memories we carry in our hearts

A great way to remember Old Gold and Blue