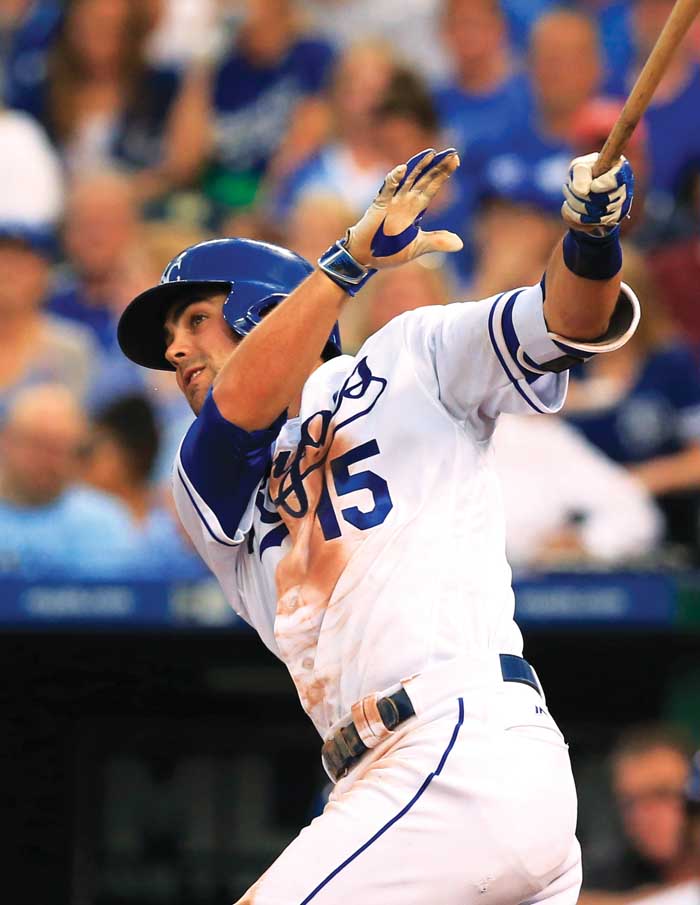 Whit Merrifield takes a rip for the Royals.

In a 2-1 home win over Cleveland on June 13, the leadoff man did it all, hitting a triple and scoring the game’s first run and hitting a 409-foot homer for a 2-0 lead. He became the second Royal ever to record his first career triple and home run in the same game (Jim Wohlford, 1973). Both hits came off Carlos Carrasco, who has a 3.26 ERA through 47 innings.

“This kid is not a flash in the pan,” KC manager Ned Yost told reporters. “His swing works up here. It’s very compact. It’s very short. He covers the plate really, really well. He has a good sense of timing on breaking pitches. He just gives you really good at-bats.”

After the game, Merrifield received a Gatorade bath, then talked about the triple.

“Once it got over his head (in right field), I knew I was either going to be on third base or (base coach) Rusty (Kuntz) was not going to be happy with me.”

Three innings later, “Two-Hit Whit” drove an 0-2 pitch over the bullpen in left for his first big-league homer.

“I was thinking about bunting,” he said. “I’m glad I didn’t. He threw a curveball and left it up. I got the barrel on it. It was pretty cool.”

“I wasn’t planning on coming here and going back (to Triple A),” he told reporters. “You want to come here and play like you’re capable of playing.”

When Merrifield reached 28 hits, they were the most by a Royal through his first 21 career games. Johnny Damon held the record with 27, set in 1995.

In a 9-4 win over Cleveland on June 15, Merrifield recorded his 11th multi-hit game in 24 tries, going 2 for 5 as the Royals completed a three-game sweep that forced a first-place tie between the teams.

Merrifield’s 34 hits through the first 25 games of his Kansas City career put him in a tie for first with Damon; his nine doubles tied him for first with Mike Aviles; and his 19 runs are second to Damon’s 20 in 1995.

But wait, there’s more. In a 16-5 rout of Detroit on June 18, Merrifield went 3 for 5 with four RBIs and a walk, raising his average to .339. He picked up his fourth steal and scored his 21st run in 27 games as the Royals improved their majors-best home record to 24-8.