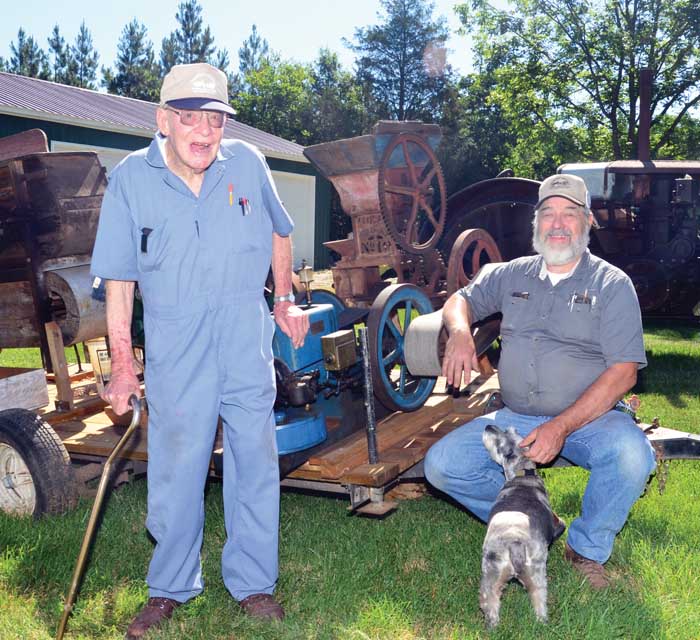 Bobby Cartner and his neighbor among the tractors on his Scotch-Irish property.

And unlike many tractor collectors, he’s not partial to a certain brand. His farm in the Scotch-Irish neighborhood of Rowan County contains just about every brand imaginable, including a few rare pieces.

Like most people who grew up in rural areas, Cartner, 81, remembers his grandfather and father using tractors on the farm. He remembers an a Farmall when he was about 6.

“I drove it around the field at my aunt’s house. They pitched hay on it with a fork. They didn’t bale it.”

Cartner became more serious about the hobby after a motorcycle wreck. His wife, Rachel, told him if he would sell the motorcycle, he could get a tractor.

It was 1960, and he still has that first purchase – an 8N Ford. Dozens more followed.

“I still enjoy them,” he said. “I can’t do as much, but neighbors and others help me out. I work on them and get them running. I wasn’t much on restoring them.

“I never was partial to brands. If it run and had wheels on it, I liked it,” Cartner said.

He’s not sure what he’s taking to the annual Tractor & Engine Show and Parade July 1-2 in Mocksville, but he’ll take something. Some are crowd favorites, like “The Old Ways Machinery” wagon, that contains a corn grinder, sheller, butter churn and pea thrasher. The machines date back to 1900 or earlier.

“We love the machinery. We love all of it,” Cartner said.

He worked in the furniture industry, but always had equipment such as bulldozers to make money on the side. “You can always make a few dollars if you know what you’re doing.”

Cartner has a quick wit, and apologizes for living in Rowan County. His family grew up right across the river from Davie. “If I had known what I know now, I would have got in my diapers and swum across the river to Davie.”

He does most of his business in Mocksville, and his wife is at Davie Place, so he visits several times every week.

“It’s been a good ride and I’ve enjoyed it,” he said. “I’m looking forward to the show there at the picnic grounds. I enjoy coming over there, but I’ll need help from a few people in the club.”

The tractor show opens Friday, July 1 and continues into the late afternoon of Saturday, July 2. The parade, which regularly features more than 200 antique tractors, starts at 10 a.m. and travels from the show site at the picnic grounds behind the Brock off North Main Street and goes through downtown.

There will be bingo, games and prizes. There will be food, live music, an auction, raffle and more. There is no admission to the show or parade, which is rare, according to Aurther Bostick, president of the sponsoring Piedmont Antique Power Association.

Sheek “Junior” Bowden will be the grand marshal. As the former owner of the local Ford/New Holland tractor dealership, he sold hundreds of tractors to Davie farmers.

“It’s just a good family time out there,” Bostick said. “We would like to invite everybody to come out. It’s free to get in to have a good time.”