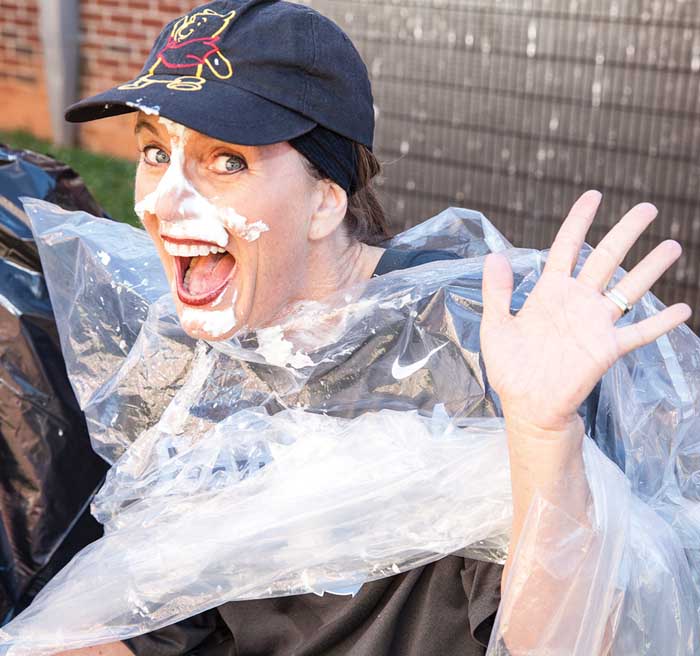 As usual, Cooleemee School students were celebrating the last day of school in style.

To start the last day of school off, students were allowed to throw whipped cream pies at their teachers. Some of the students got smart and gently gave them a nice smear of Cool Whip right on the face.

Any student who made reading growth by increasing their reading level got to take part in the activity. If they went up three levels, they got three cups and if seven levels were achieved, they got seven cups.

More cups meant more fun. Not just for the students, but for the teachers, also.

By the time the fifth graders had their turn, it was said, the teachers were about to gag on whipped cream over load. They had a blast.

The annual send off of the fifth graders took place at the end of the day. It’s quite touching to see the entire school staff and students make rows down both sides of the long walkway that leads them to the bus where they will take their final ride home.

Hugs, tears and excitement could be seen all around.

As everyone had been loaded on the bus, all car riders and the staff stood on the sidewalk as the buses went round and round blowing the horn, and waves, screams and cries came from the buses and those on the sidewalk. It’s really something to see.

It gets me every time and I’m just a bystander.

After four years of solid leadership, principal Karen Stephens will be transferring to William R. Davie in the fall.

“It was a fabulous year. We’ve seen growth, the kids have grown academically and teachers and all, we’ve seen a lot of success,” says Stephens.

Cindy Stone will be the new principal for Cooleemee School starting 2016-2017. Stone says she is looking forward to continued success in the vision of their staff and teachers.

Kristen Whitaker was voted as teacher of the year for Cooleemee for the 2016-2017 year. Whitaker has been at Cooleemee School for 11 years.

“I think teaching is all about relationships. The