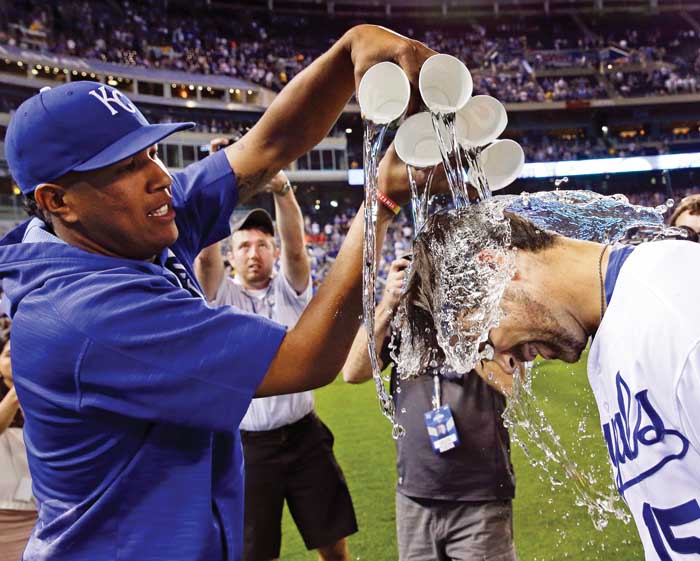 Kansas City's Whit Merrifield is doused by Salvador Perez after a game on June 1.

Whit Merrifield just keeps adding to his list of accomplishments in his first two and a half weeks in the big leagues for the Kansas City Royals.

Here’s a look at the amazing feats:

• On May 30, he became the first Royal ever to hit safely in his first nine starts.

• On June 1, he achieved his seventh multi-hit game in his 11th start, the first rookie in the majors to do that since Yasiel Puig in 2013.

• On June 1, he recorded a hit and a run in an eighth straight game, the longest streak by a Royal since Alex Gordon had an identical run in 2011.

Merrifield’s unbelievable start coincided with the Royals sweeping series from the White Sox and the Rays. The defending World Series Champ’s tear ended the same night that Merrifield was out of the lineup for the first time in a while. He got a rest on June 2 and KC blew a late lead at Cleveland and lost 5-4. The Royals had won six straight and 13 of 16 for their best stretch since August of 2014.

Merrifield finally cooled off in Friday’s 6-1 loss to Cleveland, going 0 for 3 with a walk, but the next day he came right back with a first-inning single as he recorded a hit for the 12th time in 13 career starts. That was the same day that manager Ned Yost announced that Merrifield will be the everyday second baseman for the foreseeable future.

“It’s the mentality he brings every day,” first baseman Eric Hosmer told The Star. “It fits with everybody in here.”

“He’s always just been the best pure baseball player,” reliever Scott Alexander said. “It always seems like people say that, and it’s like a jab, and it’s not. It’s the kind of player you want.”

Merrifield has become a fan favorite. On June 1, a girl sitting  behind the Royals’ dugout held up a sign that read: Get Jiggy Whit It!

The father and son posted remarkably similar numbers during their minor-league careers. Whit’s father, Bill Merrifield, played in 693 games in the minors. Whit played in 683. Whit scored 387 runs; Bill 373. Whit had a .274 batting average; Bill .270. Whit had a .334 on-base percentage; Bill .330. The only real difference was Bill’s .452 slugging percentage to Whit’s .399. The 6-foot-4 Bill had a 53-point edge in slugging because he socked 94 minor-league homers to Whit’s 40. Bill blasted 29 homers for Single-A Peoria in 1984, when his manager was Joe Maddon, the current skipper of the Chicago Cubs.

When Whit was seemingly stuck in Triple-A, it seemed like the family might be destined for some deja vu.

In September of 1987, the phone rang and Bill was headed to The Show. And then he wasn’t. It was unrestrainable joy, followed by Bill falling to his knees.

“I got traded to Pittsburgh for Johnny Ray,” Bill told the Enterprise in 2001. “I played two games with the Triple-A team in Vancouver and then got called up to Pittsburgh. I fly from Vancouver to Pittsburgh all day on a plane, we’re playing the Braves that night and Zane Smith was pitching. They have me taking batting practice in Three Rivers Stadium my myself with all the brass from Pittsburgh standing around the cage. I just get off a plane and I’m tired – no pressure on me, right? He’s throwing and throwing and throwing. It’s like aerobics.

“I go back in the locker room, and that’s when they had Barry Bonds, Bobby Bonilla and Andy Van Slyke. They’re coming up and introducing themselves and my uniform’s in the locker. I’ve got No. 11. The clubhouse guy comes up and goes: ‘You’re starting at first base tonight. What do you need?’”

The debut that Bill had dreamed about for five years quickly evaporated.

“Sometime between the time they tell me I’m starting and game time, my whole career changed,” Bill said. “(Pittsburgh manager) Jim Leyland, who had never seen me play, calls me in his office and said: ‘Bill, I want you to go to instructional league.’ I said: ‘OK.’ I thought he was talking about after the season. He said: ‘I want you to prove to me that you can hit for power.’ I had already hit (90-some) minor-league home runs. I said: ‘When do you want me to go?’ And this was Saturday. He said: ‘We want you there Monday.’ I said: ‘This Monday?’

“And that was it. I never dressed. So in 45 minutes my whole career changed.”

The crushing turn of events sapped Bill’s passion and he hung it up a year later.

“The last day of spring training (in 1988) I’m traded to Texas, and that’s where I learned to play golf,” Bill said. “That’s when I decided I had had enough. My wife (Kissy) got pregnant, I wanted to raise a family and I didn’t enjoy going to park anymore. It’s the best thing I ever did.”

Bill told KC reporters one major difference between he and Whit is Whit can bunt and he couldn’t bunt. He said watching Whit realize his dream is more gratifying than anything he ever did as a player.

“I didn’t love it like Whit loves it,” Bill told The Star. “I did it because it paid me some decent money in Triple-A and I was good at it. But I didn’t love it. He loves it.”