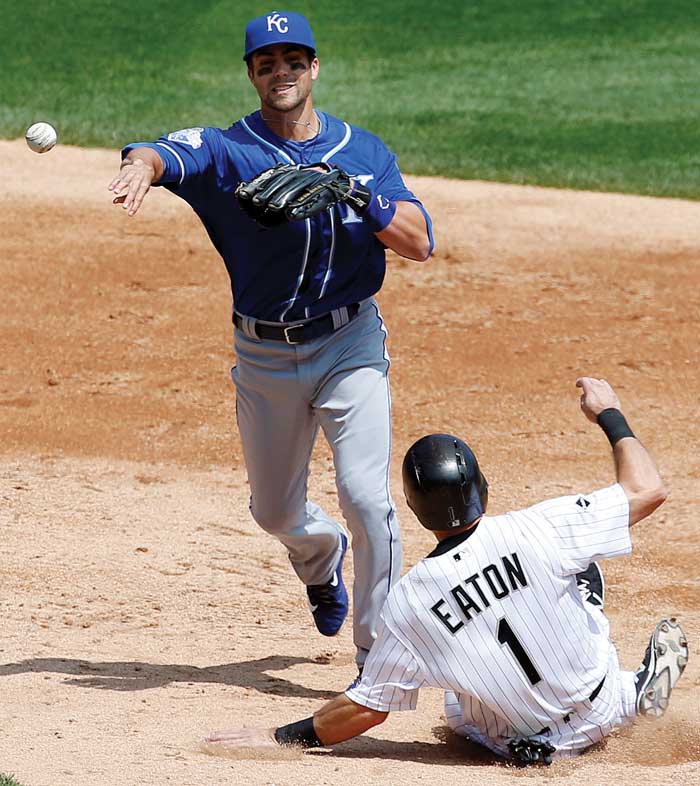 If you need a lesson in the power of patience and perseverance, see Whit Merrifield. After nearly six full years in the minor leagues, after playing 707 games in Kansas City’s organization and after seeing over 2,000 at-bats in the Royals’ farm system, Merrifield can boast one of the greatest Davie County stories ever told.

“It’s hard to explain,” the 27-year-old from Advance who graduated from Davie High in 2007 told the Kansas City Star. “You work your whole life in this game to get to the big leagues.”

Merrifield is an easy player to cheer for. He won in the face of seemingly insurmountable adversity, earning a promotion from Triple-A Omaha to Kansas City on May 18 and debuting with a start in left field against the visiting Boston Red Sox. But his journey from the minors to the majors had its share of speed bumps.

Just look at the number of letdowns he endured:

• In 2014, he hit .317 with eight homers and 41 doubles while spending time at Double-A Northwest Arkansas and Omaha. Despite the great numbers, Merrifield did not get called up in September. The Royals would reach the World Series, losing in seven games to San Francisco.

• Merrifield returned to Omaha in 2015, hitting .265 in 135 games and stealing 32 bases in 39 attempts. He did not get a September call-up as the Royals won their first World Series since 1985, beating the New York Mets in five games. On top of that, Merrifield was not placed on the 40-man roster.

• On July 8, 2015, Merrifield was playing second base for Omaha. In the sixth inning, he was suddenly removed from the game. In a Kansas City game that same night, left fielder Alex Gordon suffered a serious injury. Merrifield getting pulled could only mean one thing – he was headed to The Show. Apparently, the Royals’ brass changed their mind and decided to pull up someone else.

• In 2015 and 2016, Terrance Gore got the 25th and final roster spot, even though Merrifield had performed splendidly in spring training in back-to-back years. Before the April 3 season opener, he was one of the last players cut.

Talk about punches to the gut.

“It’s hard not to get frustrated,” Merrifield said several months ago. “Last year I feel like I kind of let my season slip away after the whole Gordon thing happened. I was having a good year, then I kind of fell apart at the end. It’s hard to say anything bad about what they did because they won a world championship. So obviously they made the right move. But I felt like I could have helped. They made the right decision. It just kinda sucked for me personally. But it’s a business and obviously they did what they needed to do. The last couple years I’ve done all I can to open some eyes. I’ve always said the minor leagues are not where I thrive. It’s hard for me to go out and play just for myself when there’s not a whole lot of emphasis on winning. Guys are developing. Guys are trying to move on in their career. It’s a hard atmosphere for me to play in. I’ve done the best I can. I’ll keep working on my game and hopefully make that jump.”

On May 17, Merrifield was in Tacoma, Wash., playing golf when he saw a text message from Omaha manager Brian Poldberg.

“We had just finished playing Chambers Bay (Golf Course),” Merrifield said. “I got off 18, looked at my phone and our manager texted. I knew then.”

The Royals had a day-night doubleheader with Boston on May 18. Between games came the announcement that Merrifield was going to make his major league debut in game two. His hometown fans were abuzz. Most of the 30-minute pregame show on the Royals’ network – hosted by Joel Goldberg and Jeff Montgomery – was dedicated to Merrifield’s pending debut.

Goldberg said: “Every manager would love to have a guy like Whit Merrifield. He had a phenomenal spring training. He can play basically anywhere but pitcher and catcher. He might have been the best player the Royals had in spring training. He absolutely opened eyes, but there wasn’t a spot for him. From the folks I talk to – and we saw him at spring training and talked to him some – say that his makeup is off the charts. He is the type of guy that every manager wants in his dugout or on the field. A very, very high class, responsible and play hard type of guy. And certainly versatile too. Maybe we’ll see a little bit of magic from Whit Merrifield. His family is here and they will be anxiously awaiting as they are wearing their Royals’ gear.”

In the third inning, Merrifield flew out to center in his first at-bat. But the debut became extra special in the fifth, when he got his first major league hit with a sharp grounder between short and third. He finished 1 for 3, facing Price each time.

“I hope he gets 2,999 more (hits),” the Royals’ broadcaster said. “It’s great when the parents have a chance to actually be here.”

It took years, but Merrifield is finally seeing the fruits of his labor. In the offseason, he worked out relentlessly at Adam Barber’s Torque Performance gym in Mocksville and put on 20 pounds, bulking up to 195. He devoured seven meals a day.

For four-plus minutes during the top of the fourth, Goldberg interviewed Whit’s parents, Bill and Kissy Merrifield. Sister Costner, brother Hite and fiance Jordan Michael were also on hand for this incredible moment.

Goldberg: “Bill, you found out late last night and it’s been a whirlwind, right?”

Bill: “We haven’t slept since 11:30 (p.m.) last night. Whit was on the West Coast, and when he found out he called us. We couldn’t be more proud of him. We were going to go wherever he was. Whenever this day happened, we were going to be there.”

Goldberg: “Kissy, you look like the most proud and nervous mother in the world, exhaling after every pitch. What is it like to see your son on a big-league field?”

Kissy: “It’s so surreal. He has worked so hard and we’re just so proud. We knew this day would come, but it’s been a while. We’re just so happy we could be here to watch him.”

Bill: “Whit never lost faith that this day was going to happen.”

Goldberg: “Kissy, we watched him during spring training. He might have been the best player in all of camp. How encouraged were you watching that and this was getting closer?”

Kissy: “Very encouraged. My daughter, Costner, and I went out toward the end and he did good. He was pumped up and we were hoping. We knew it would happen, whether it was then or later.”

Goldberg: “We were doing one of his (spring training) games and I talked about six positions, and (Whit) corrected me and said it’s seven. Was he always this way? Was he a guy who could play every single position, because that’s so unique?”

Bill: “Most of the best players growing up are shortstops, but he prided himself on being able to go in the outfield and shag fly balls or go to first base and pick balls. He wanted to be on the field no matter what it took. He’s made himself a big-league player. By putting 20 pounds on last offseason, it was the most amazing thing I’ve ever seen, and our food bill proves it.”

Bill: “He will tell you the best athlete in the family is Kissy, and that’s OK. We joke about it a lot. I’ve got to say at this point he’s got to be the best athlete in the family. When he started out in A ball, he won the Community Service Award in the Carolina League. You’ve got to create the whole person, and his whole person is off the charts.”

Goldberg: “Congratulations, Bill and Kissy and all the family. If we think everybody is tired with a doubleheader, I know you guys are much more tired. But it’s a day I’m sure you will never forget. You have a big-league son.”

In the clubhouse after the game, reporters surrounded Merrifield.

“It’s nice to get (the first hit) out of the way,” he said. “I don’t have to worry about it. To get it off a guy like Price, it’s the icing on top. I got a little antsy first at-bat. I was a little amped up. But after that I settled in and started picking the ball up a little better. The second at-bat, I saw a changeup out of his hand. He left it up and I got the barrel on it. I chopped it in the ground, but I’ll take it every time.

“The most exciting thing for me is finally getting back to playing games that matter, playing games where the goal of the game is to win. You can try all you want in the minor leagues, it’s just not the (same) environment. It’s so exciting to get back to not caring about anything but winning.”

Goldberg sent viewers back to the studio with this: “I think Royals’ fans are really going to like Whit Merrifield and the way he plays the game.”

The next day, Merrifield tweeted: “Thank you to everyone for all your support and kind words. It’s been a long journey and a dream come true.”

Merrifield did not play in the Royals’ next game, Friday at the Chicago White Sox. But his heartwarming breakthrough continued on Saturday as he started at second and batted eighth. His first action in the field was a 6-4-3 double play. His second play was another 6-4-3 double play, this time with the bases loaded, no outs and the Royals nursing a 2-0 lead. In the ninth, he assisted the first out to help KC secure a 2-1 win. He went 1 for 4, sending a bullet over short for a single.

He’s one of those rare guys who can play every position except pitcher and catcher. He has what it takes inside the chest and above the neck. He’s a prime example of never-dying determination.

“Looking for versatility, that’s exactly it,” Royals manager Ned Yost said. “We’ve got to carry (13 pitchers) right now. We’re extending (Danny) Duffy as a starter, so we’re short (in the bullpen). Plus, (Merrifield) had 16 stolen bases in Triple-A. It’s another piece we can use off the bench to help us win a game. If we pinch-hit (Jarrod Dyson) for someone, Whit can play anywhere on the field.”