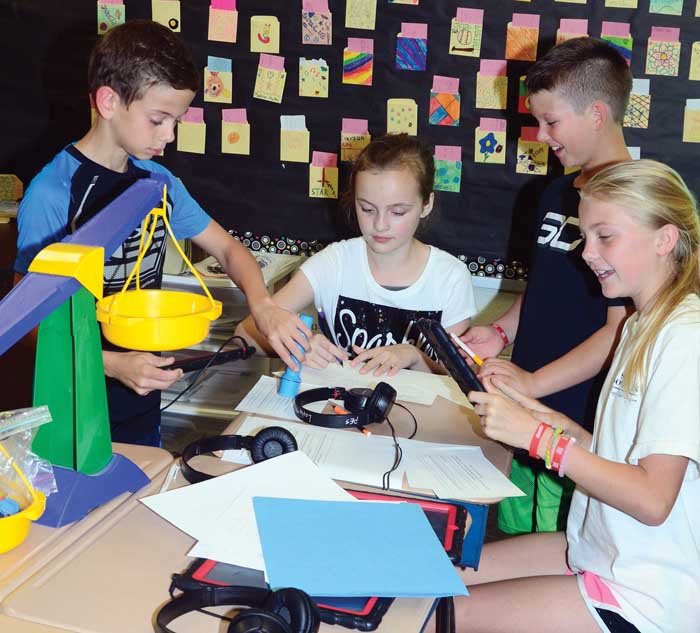 Students at Pinebrook conduct an experiment for Gov. Pat McCrory.

Gov. Pat McCrory spent part of last Thursday sitting on a rug, surrounded by the possible future leaders of this state.

His visit to Pinebrook Elementary School came two months after a visit by his senior education advisor, Catherine Truitt.

Superintendent Dr. Darrin Hartness said: “Ms. Truitt saw the excellent teaching and learning strategies being used in our district and wanted the governor to see the same and better understand the impact of using digital resources.”

In the first stop on his visit to the school, McCrory seated himself on a rug beside second graders in the classroom of Amy Spade, teacher, and Michelle Sigmon, teacher assistant, and watched as they guided students using NXT robots to read and navigate maps of the US and of downtown Mocksville. The exercise was part of a unit on interpreting, analyzing, and creating maps, and part of their learning was done by using e-books through NCWiseOwl.

In the second stop, to Tracy Miller’s first grade math class, students were learning place value and geometry using the programs Prodigy and Skitch on iPads, and in the media center, while some students worked on a SmartBoard to identify prime numbers, McCrory found himself watching students play a bowling game using a Wii. They recorded scores in fractions of pins knocked down and pins still standing. After a brief tutorial by one student, McCrory tried his hand at the game, with an end score of 91/100.

He also spoke to students in a classroom in Wallace, as they Skyped with Pinebrook teacher Lauren Pilcher’s fourth graders to create an illustration for a poem. McCrory was amazed at the technology that would allow students here to interact in real time with students in a class in another part of the state, saying, “They didn’t have any of this when I was in college.”

In Kim Crotts’ fifth grade classroom, science students showcased Discovery Education’s Science TechBook, where they worked in small groups, where they watched a video with an interactive exploration and experiment, and they worked to chart an outcome and explain the outcome of experiments.

The classroom visits were followed with a brief question and answer session in the gym for the media. Visibly frustrated by the onslaught of questions centered around HB2, McCrory concluded those questions by saying it would be for the courts to decide.

“I will defer to the Constitution as I have many times as governor,” he said.

He told the media he wanted to talk about education and technology, the reason he was visiting Pinebrook, and said: “Davie County is one of the leaders in adapting technology to schools…We are seeing the best of NC education right here in Davie County, seeing teachers adapting to technology,” something, he said, “is no problem for the kids.”

He said one of his major goals would be to insure that every school in the state has WiFi by 2018.