Davie strands 14; loses in first round 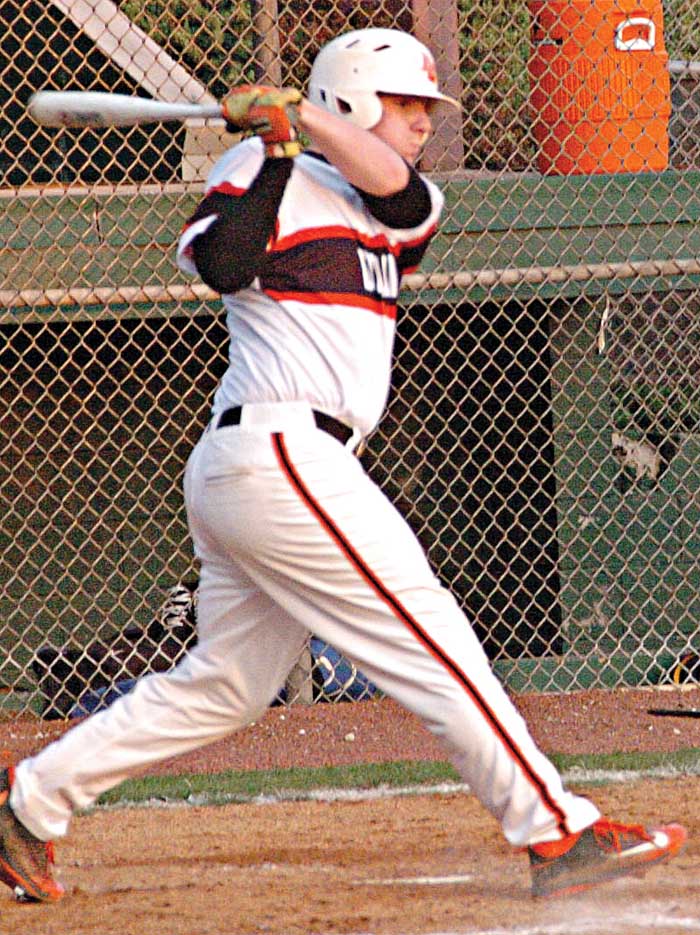 It wasn’t supposed to go this way. Davie’s large and talented class of seniors were supposed to end their careers deep in the playoffs. That’s how the storybook is supposed to go. And when senior Brandon Lankford blasted a game-tying home run in the fifth inning and Davie had the go-ahead run at third with one out in the sixth, that’s how it looked like it was going to go.

But the War Eagles lost 6-4 to visiting Mooresville in the first round of the 4-A playoffs on May 10, and it was their own darn fault. They stranded 14 runners, including eight in the first three innings. They also committed two errors in the top of the seventh, which began with the score tied at 2 and ended with the Blue Devils in command at 6-2.

Davie, which had son six straight and nine of 10, was favored as the No. 12 seed in the West Region bracket, but the second seed from the Central Piedmont Conference bowed out with an 18-5 record. The 21st-seeded Blue Devils, who went 10-4 to tie for third in the North Piedmont 3A/4A Conference, improved to 16-11.

The story of the game: runners left on base. Davie had scoring opportunities in the first, second, third, fourth and sixth innings and was left frustrated after all five frames.

In the first, Jalen Scott singled with one out and Paul Davenport walked. In the second, Ryan Harrell doubled with two outs and Mitchell McGee walked. In the third, Scott and Davenport had walks, and Scott advanced to third on a productive fly out by Craig Colbourne. Courtesy-runner Jake Barneycastle stole second to put runners at second and third with one out.

“That was the telltale sign,” Byerly said. “I looked at Jamey (Holt) after the third inning and said: ‘I sure hope this doesn’t come back to bite us.’ It just wasn’t our night to string something together. We struggled, struggled, struggled. We’d get runners on and get a popup or a strikeout. We just could not put them together.”

In the first three innings against Davie starter Isaac Campbell, Mooresville had one hit and no Blue Devil had reached second base. That changed with the first batter of the fourth, when Mooresville’s No. 3 batter, Mark Miller, hit a solo bomb to give the visitors a 1-0 lead.

Davie stranded two more runners in the bottom of the fourth. McGee walked with two outs and Chris Reynolds singled. A ground out kept it 1-0 Mooresville, which tacked on a run in the fifth to make it 2-0.

The end would overshadow one of the clutch postseason homers in Davie history. With Davenport aboard via base on balls, Lankford tied the game with one swing, the long homer going out to center field. It was his second homer of the season and the ninth of his three-year varsity career. After going homer-less for 20 games, he hit two in the last three games.

Davie threatened to take the lead in the sixth. McGee walked and advanced on Reynolds’ sac bunt. Scott reached on an error. When pinch-runner McKay Chamberlain moved up on a wild pitch, Davie had runners at second and third with one out. A ground out to second failed to plate the tiebreaking run and a strike out ended the inning.

The top of the seventh left a nasty scar as Mooresville scored four unearned runs against Campbell and reliever Nathan Harrell. The first batter reached on an error. Two runs scored on a throwing error at first. N. Harrell relieved when it was two on, no outs and the score tied 2-2. He was the obvious choice to take over, having allowed one run in 19 innings as a senior and compiling a 7-0 record in two years.

The War Eagles put up a serious fight in the bottom of the seventh. After Lankford walked on four pitches, Tyler Roberts doubled and N. Harrell walked to load the bases. Ryan Harrell popped out, but McGee drew a bases-loaded walk to cut it to 6-3. After Reynolds popped out, Scott was hit by a pitch to close the gap to 6-4. It came down to this: Davie’s No. 3 batter, Davenport, at the plate with two outs and the bases loaded. Davie was excruciatingly close. It didn’t happen. He flew out to center.

“We were a base hit from having a new ballgame,” Byerly said. “But it wasn’t our night for it to happen.”

For the fifth time in seven games, Mooresville played a tense game decided by one or two runs. It had dropped three of the previous four.

Campbell, who made his team-high ninth start, left after six innings and 111 pitches. Two of the four runs were unearned, but he got the loss to drop to 4-2. He had a solid ERA of 2.29. Both runs off N. Harrell were unearned.

“It was one of the roughest (postgame huddles),” Byerly said. “I’m not real good on those nights anyway, but when you’re staring at that many seniors with tears in their eyes, it’s hard to come up with the right things to say.”

“I told them 18-5 is not too shabby,” Byerly said. “Not many Davie teams have had a record that good or better. We were in a conference with the No. 1 team in the state (North Davidson). We were in if not the best, one of the top two conferences in the state and we’re 18-5. When the days, weeks and years go by, you’re going to be proud of this moment. You’re going to be proud of 18-5 in the conference we’re in. We beat some really good teams in conference and nonconference.”

Notes: Mooresville pulled another upset in the second round, winning 6-2 at No. 5 Hough. … The War Eagles have not had postseason success of late. They did not receive a berth in 2014. They lost 4-1 at East Forsyth in the first round in 2015.

Softball hammers Hough in first round