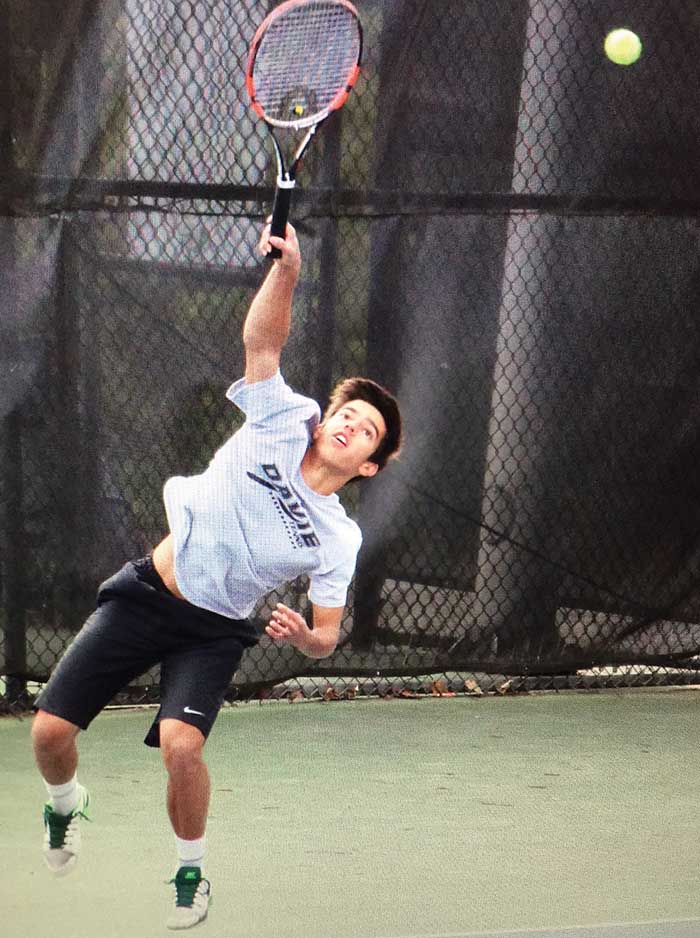 Elijah Gregory has the most tennis wins for a Davie player in at least 21 years.

Elijah Gregory can add conference runner-up to his resume.

The Davie tennis star steps it up every year. As a freshman, he went 13-5 and finished fifth in the Central Piedmont Conference tournament to earn a regional berth. As a sophomore, he went 14-7 and finished fourth in the CPC.

And in the CPC tournament at Davie on April 26, the second-seeded junior claimed second place and ran his record to 19-2. It was the highest finish in the conference tournament in four years, going back to Scott Gallimore’s singles championship in 2012. With 19 wins, Gregory has the most since Gallimore’s 20-4 mark in 2012.

“Elijah and Jack Robinson went a combined 36-9 in singles and doubles, which I feel sure would be a record if they kept it for doubles partners,” coach Shane Nixon said.

After receiving a first-round bye, Gregory blew past Parkland and West Forsyth in the quarterfinals and semifinals. Second was as good as he could hope for because he ran into Reynolds senior Bennett Crane in the finals, losing 10-4 to the Indiana commitment. Crane has been ranked as high as fifth in the nation. He has lost seven matches in his career (two in singles, five in doubles). He reached the state semifinals as a freshman and was state runner-up as a sophomore. He did not participate in the regional as a junior.

“Crane is a great kid, too,” Nixon said. “He’s humble, jovial and a wonderful young man.”

Robinson and Davie’s two doubles entries bowed out in the first round. Robinson, a senior, finished with a 12-7 record. Seniors Sebastian Mikulski/Nikolas Parnell and junior Sam Jordan/senior Jack Ratledge teamed up in doubles.

“I’m not sure people realize how tough the CPC is,” Nixon said. “There were probably 5-6 guys who were undefeated at their respective seeds on CPC teams. I felt like Reagan was the second-best team in our league and their overall record was only 8-7. West Forsyth only lost three times in conference but had five matches finish 5-4, including both with us. Reynolds could easily win the state in the dual team and in singles and doubles.”

The War Eagles tied for third in the CPC tournament, a nice showing after finishing fifth in the regular season.