Ellis students learn about life on a plantation 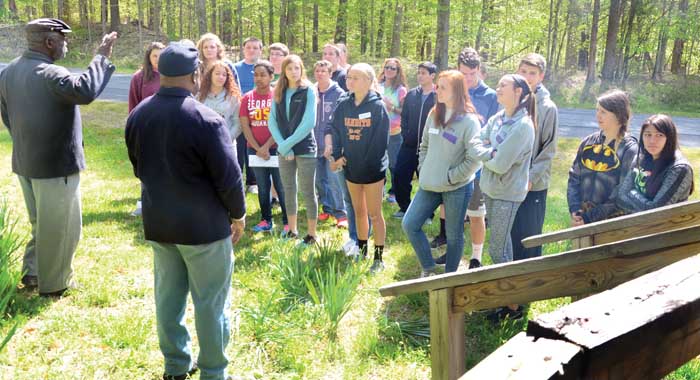 Ellis Middle students learn about life on a plantation - from the black and white perspectives.

Students from Ellis Middle School took a step back in time when they toured the Cooleemee Plantation and listened as guest speakers shared their knowledge of life on a plantation.

One of those speakers was Joseph McGill, founder of the Slave Dwelling Project.

A former employee of the National Trust for Historic Preservation, McGill said he became aware there was a need to stress the importance of the slave dwellings found on plantation properties. Attention and funds have been directed toward preserving the large antebellum residences of the plantation owners, but the homes of the slaves who worked on the plantations are often overlooked, he said.

Terry James, a Civil War reenactor who travels with McGill, told the eighth graders: “Without these places, those houses couldn’t exist. This is the machine that ran the big house.”

The log cabin structure that sits on the Cooleemee Plantation property was one of about 60 that likely were on the property, McGill said. With one family per cabin, there were potentially 300 to 600 slaves.

To bring attention to slave dwellings, McGill travels to plantations, wherever they may be, and spends the night in the slave cabins. The night of the field trip, April 15, McGill and James were joined by Jon Williams, Ellis assistant principal, and Prinny Anderson, the four-time great-granddaughter of Thomas Jefferson. Williams said later sleeping in the cabin was interesting, a bit chilly and it wasn’t easy to sleep on a hard floor, but he was happy to have had the experience.

Anderson talked about Thomas Jefferson, one of the authors of the Declaration of Independence, and the irony of the sentence “All men are created equal,” because Jefferson owned slaves. She told the students about Jefferson’s first wife, Martha, who inherited the property of her father John, when he died. In that inheritance was her half-sister, Sally Hemmings, who was the product of a relationship between John and one of his slaves. After Martha died in childbirth, Jefferson began a relationship with Sally, who Anderson said was thought to be beautiful and looked like Martha.

Jefferson and Sally also had children, and they and the children of Jefferson and Martha were half-siblings, so the cousins were of African-American and European descent.

Anderson served on the board of Coming to the Table, an organization that uncovers racial history and seeks to support healing related to racial inequality. She is on the Community Activities Committee, the Linked Descendants group and is a member of the Slave Dwelling Project who participates in overnight stays.

The students were also treated to tours of the house and grounds by the keepers, Tom Keck and Adrienne Carpenter, and heard about the history of the former owners of the plantation, the Hairstons, and their life on the plantation by Charlie Rodenbough, history book author, and Bob Carter.

They got to meet the new owner, Spurgeon Foster, and have a picnic lunch on the grounds.

The 2,500 acre plantation features a five-bedroom home that was completed in 1855. Foster purchased the property last year.