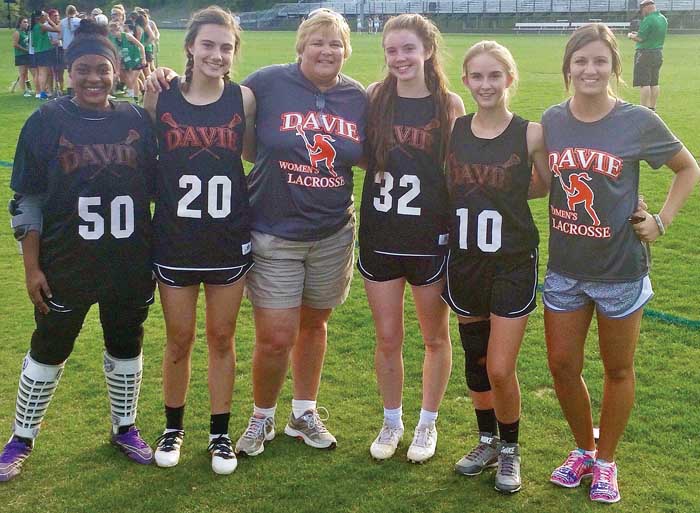 The Davie club team’s rematch on April 18 against North Davidson’s varsity resulted in nearly the same result as the first meeting. Davie got down 7-1 at the half as the lone score was put in by backside attacker Emery Rosenbaum. Davie pulled itself back up behind two goals each from Jill Staley and Sierra Foster and one from Patterson Jones. Rosenbaum and Jones provided assists. Despite 17 saves from goalie T.T. Doulin, Davie couldn’t match the experience of North and fell by a score of 12-6.

The next day Davie faced off with Reynolds’ junior varsity. Davie won a thriller, 7-6, thanks to a game-winning goal by Morgan Athey.

“Reynolds has been a powerhouse in lacrosse for years,” coach Marjorie Foster. “I was a little worried about the match but knew if we played together we could hang with them.”

After an early standoff, midfielder Foster struck at 10:45 in the half to take the lead 1-0.  The score went back and forth with a goal by Jones at take a 2-2 tie to halftime. Just 25 seconds into the second half, Rosenbaum put Davie ahead with an assist from Jones.  Davie scored three more behind Foster, Staley and Kailan Thomas to pull ahead 6-3 with 12:26 to play.

Reynolds stormed back and tied the game at 6-6 at the 7:50 mark.  After solid defense on both sides, attacker Athey put her first goal of the season in with 6:10 to play.

“I was excited for her to get that goal,” Foster said. “It put us on top, and after several misses, it was good to see her get that one.”

This is where the Davie defense had to step up.

“Defensive players in sports like these often don’t get the accolades they deserve, but Mary Ellen Lewis, Anna Jones, Bailey Walsh and Alexis Dulin came through all year,” Foster said. “Those girls were at nearly every single practice and it showed in their defense. The game needs scorers but you can’t win without solid defense. Ellie Byers, Healy Junker and Claire Wallace provided excellent relief on defense all season.”

Davie held off Reynolds in the end. Doulin had 12 saves, including several great stops in the closing minutes.

“I told T.T. that she had found her calling,” Foster said. “She is relentless and fearless in the goal. Trust me, it hurts to get hit with those hard balls no matter how much padding you have. She is a beast for us.”

Davie finished its first season ever in girls lacrosse with a rematch with Reagan. After a close loss (6-4) on April 8, Davie came to play, stunning the Raiders with an electric 7-6 win. With the score tied in the waning seconds, Thomas delivered the clincher.

Reagan got on the board first and then the teams went back and forth behind three goals from Foster to tie it at 3-3. Reagan took a halftime lead of 5-3. Davie came back with a goal from Rosenbaum 35 seconds into the second half.  Thomas added a goal to tie it at 5-5. After Reagan went ahead, Foster scored again to make it 6-6 with 14:35 to play.

“It was a standoff and impressive displays of defense with both teams getting free shots on goal,” Foster said. “We kept switching out our middies and attackers in the heat. Gracie O’Brien, Tatiana Armstrong, Jill Staley and Emily Pender helped us keep up the pressure on Reagan.”

Doulin did an unbelievable job of stopping Reagan’s shots. With time running out in regulation, Thomas charged the goal and scored the walk-off goal with three seconds to play.

“The crowd was really into it,” Foster said. “I know we had more fans there than Reagan. It was a real thrill for these girls to go out with a big win. I don’t think we’ll forget that one for a long time. I can’t thank the parents and fans enough for the support.”