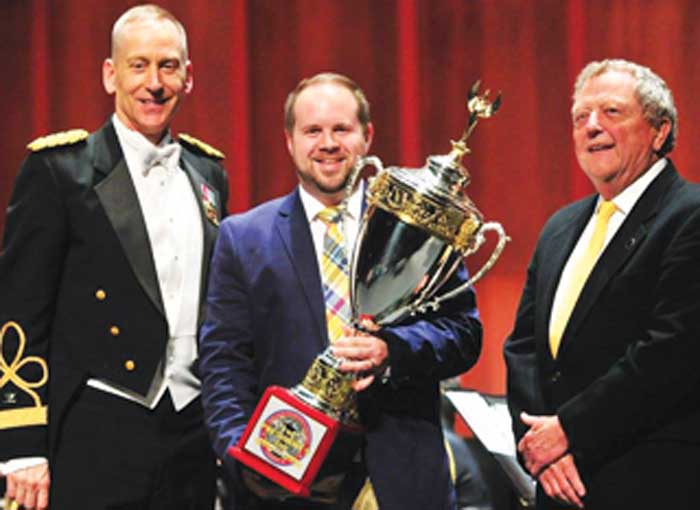 The Wind Ensemble from Davie High School was not only one of eight bands from across the nation chosen to compete at the 2016 President’s Cup competition in Manassas, Va., but they brought home the coveted President’s Cup trophy.

Band Director Andrew Jimeson said there were 100 bands contacted to apply to compete at the national band competition hosted by the U.S. Army Band, and eight were chosen by a committee of nationally-renowned band members. All bands got to work with the commander of the Army band at a clinic the day before the Saturday, April 2 competition, held at the Hylton Performing Arts Center.

Members of the Army band were judges, and the 62-member Wind Ensemble performed three pieces, “A Slavic Farewell” by Vasilij Agapkin, “Grant Them Eternal Rest” by Andrew Boysen (written in honor of those who lost their lives on 9/11), and “Virginia Scenes” by James Kazik (all bands played this piece).

Jimeson said the pieces were grade level six, the most difficult.

Three students were selected to play with the Army band at a special concert held Saturday night. They were Marceli Lewtak, a freshman trumpet player, Caleb Lanning, a junior trombone player, and Austin Lowery, a senior who plays tuba.

Most remarkable about the experience, Jimeson said, was that the students raised all the money needed to make the trip, about $36,000, and they did it in two months by asking business and individuals for donations. Jimeson said he wanted to extend a special thank you to everyone who helped make the trip a reality for the students.

Band captain Allison Staley, a senior percussionist, said: “It was amazing to see everything fall into place with our fundraising and know that all of our hard work turned into a fantastic trip. When they announced our name as the winner of the President’s Cup, I was in shock because a high school in this little town in North Carolina just built itself a national reputation. There is no better way I could think of to finish my senior year in band.”

In the days after the competition, the band received invitations to play in the National Memorial Day and July 4 parades, both in Washington, DC in 2017. Jimeson said he isn’t sure if they will be able to do both but knows if more fundraising is in their future, the band will do whatever is necessary to secure a spot and give the best performance possible.

“This was not necessarily a competition. It was really an honor for the bands to just get to perform. I tell the students all the time it’s not about winning a trophy, it’s about giving the best performance you can possibly give. It feels good to get the trophy, but that’s not what it’s about.”

The trophy is in the band room, where it will stay until it has to be returned for next year’s competition.

“It meant a lot to being invited to D.C. because it allowed us as an ensemble to realize the fact that we are a legitimate group and more than just a regular high school band,” said Charlie Chapman, a junior French horn player. “Leading up to the announcement, many of us band members were not sure where we would place. When they called our ensemble as the winners, and Mr. Jimeson was presented the huge trophy, it felt like all of our hard work over the last four months – and to an extent our work from the beginning of middle school band – had finally paid off in the form of such an impressive win.”

“It was truly a once in a lifetime experience that I will never forget I learned many things on the trip musically and historically, on top of that we won and it was the most wonderful thing ever I felt so proud to say I was a part of the Davie high wind ensemble, as a senior this will forever be a highlight of my four years in high school,” said Olivia Kuhnemann French horn.

“The DC trip was kind of a last hoorah for me with the band. Learning history and playing music with some of my closest friends is the best thing I could ask for, especially in the beautiful city of D.C.. When they announced Davie County High School as the winner, all I could scream was ‘We did it’ over and over again. I experienced so much joy, excitement, and most importantly shock. I couldn’t believe that I was going to be able to come home and say ‘We did it Davie County. We brought ya’ll a trophy!’ #dcaw,” said Meghan Donely, a senior percussionist.

“Going to Washington meant taking my love for music to the heart of our nation. It was an exciting and nerve wracking experience. Hearing the other bands helped me grow as a music and the performance of the army band made me want to work even harder. When they announced Davie as the winners it was an overwhelming sense of joy and it was everything I could do to keep from crying. Knowing that all the hard work put in by everyone paid off was such a great feeling,” said Elaina Burr, junior baritone player.

“It was a very enjoyable, great experience with viewing all the buildings and monuments,” said Stephan Dalton, junior percussionist.

“I’ve been to D.C. before so yea. But that moment we were announced winners, being from a town so small for the No. 1 high school band in the nation, the feeling was great,” said Julian Hunter, junior bass clarinet player.

“It was a fantastic honor to be selected by the US Army Band and the fact that only eight bands were selected shows the quality of our ensemble. When we won it was national recognition to us that we are an excellent ensemble and showed us that all of our hard work paid off,” said Andrew Renegar, junior trumpet player.

“The DC experience meant so much to me because it taught our band respect. When they announced us as the winners, I felt so much excitement because none of us ever expected to win. It was a moment of unity between all of us and I have never been more proud of my band family,” said Sophie Potts, senior flute player.

“Going to DC was kind of my first big field trip, so obviously it was really special. I went to DC not knowing how to feel about the competition, but the feeling of hearing them announce us as the winner really surprised me and the feeling will be most remembered,” said Sarah Impellizeri, sophomore flue player.

“Going to DC over Spring Break was a life changing experience for me personally, but it also will have a lasting effect on our program. Winning validated our abilities and it definitely boosted our confidence in our playing abilities,” said Chelsea Strange, junior clarinet player.

“Performing in D.C. was the highlight of my wind ensemble experience. It was even more rewarding because I had a significant solo, and even though it was the most nervous I have been on stage, it was the best performance I have ever given, and I am so proud and grateful to have been a part of that,” said Mikayla Thomas, senior flute.

“D.C. was a great chance to show off our musical ability and being able to win was a time I will never forget,” said Garrett Penley freshman trombone player.

“The D.C. experience was very exciting and eye opening. It was an amazing experience for our band to represent Davie and also it was a great experience to meet the military band. The band winning The President’s Cup is a wonderful accomplishment and from this we are only encouraged to keep playing greatly together,” said Brooke Smith, freshman flute.

“Not only was this trip educational and rewarding, it strengthened our appreciation for music as well as for other musicians our age,” said Claire Myers, junior alto sax player.