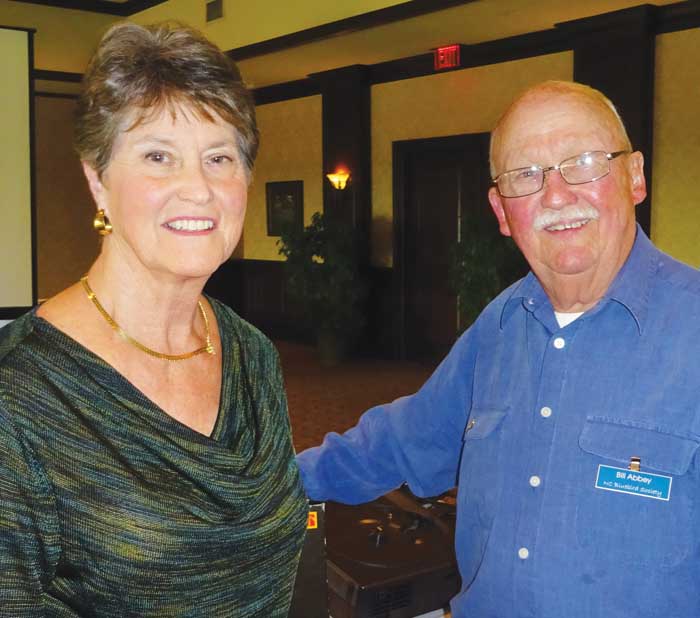 BERMUDA RUN – Bill Abbey volunteered to restore a bluebird box on a trail in Tanglewood Park several years ago and a new vocation enveloped him.

A retired Army helicopter pilot and teacher, his volunteer obsession has earned him the title of “Mr. Bluebird.” Tanglewood Park now has a trail with 38 bluebird boxes that produced 164 bluebirds in 2015.

This is significant because bluebirds have been declared a rare and uncommon bird since 1979.

Human activity and severe winters caused a 90 percent decline in the bluebird population in North Carolina from the 1930s to 1979. This beautiful songbird will always need help to persist.

Bill Abbey provided the garden club with a program to help the members succeed in efforts to help bluebirds survive.

“Mr. Bluebird” told the members: “Establish nesting sites in open areas, like sunny grasslands. Supply fresh, clean water, and berry-producing plants or shrubs near the box. There should be about 100 yards between bluebird boxes to minimize competition for food.”

Bluebird boxes have a 1.5-inch opening with no perch. Do not have high weedy areas around the box.It impairs the bird’s field of vision for insects. Do not use rocky areas for the boxes because of snakes. And stay away from areas highly sprayed with insecticides.

The members learned that the bluebird boxes need protection from other birds. House sparrows, a non-native species, will fill up the box with twigs and will trap and attack a bluebird in the box. Starlings and House Wrens will take nesting sites.

Bluebirds keep clean nests. They can produce from three to six eggs in three nesting cycles in a season. They set on the eggs for about a month, turning the eggs as they incubate. As they hatch, the female carries the egg shells out of the nest or eats them. The fledglings open their eyes at 10 days and fly at 18 days.

Garden club members will monitor the boxes on the golf course and in their yards once a week for this new project.

The North Carolina Bluebird Society has information to share  at www.ncbluebird.org concerning the care and monitoring of the nesting sites. The garden club will be doing its part to help bluebirds persist.

The Bermuda Run Garden Club members were excited to receive the yearbooks for the new club year. Cindy O’Hagan has again produced an award-winning yearbook.