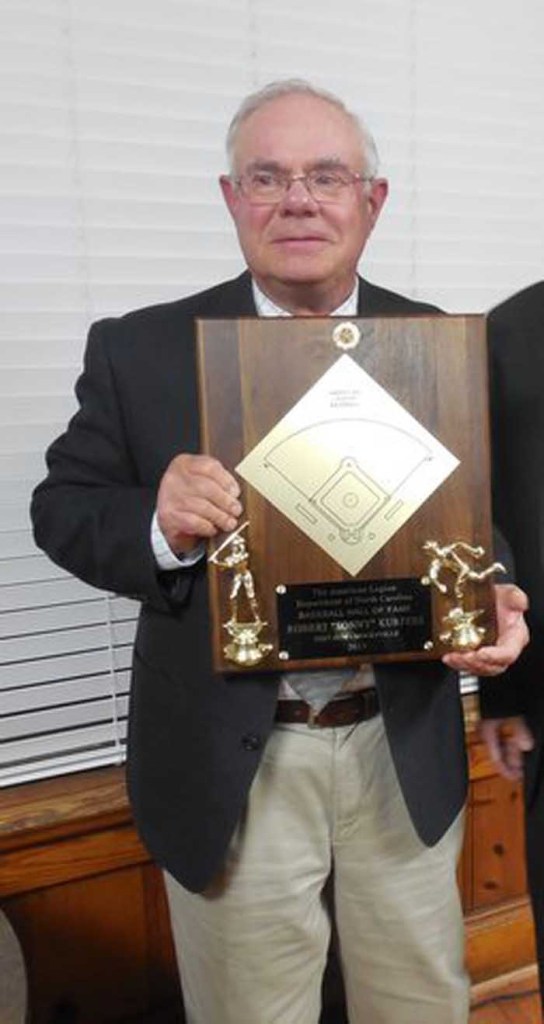 On Saturday, March 19, Robert “Sonny” Kurfees was inducted into the NC American Legion Baseball Hall of Fame, along with three other inductees: Tony Sherrill of Gastonia, Robert Lowman of Salisbury, and Rickey Zikafoose of Richlands.

Kurfees is the second person from Mocksville-Davie Post 174/54 to be inducted. He was preceded by the late Richard “Dick” Nail.

The 2016 induction ceremony was held in Liberty and was sponsored by Liberty Post 81. In addition to the hall of fame inductees, junior and senior players of the year and 2015 champions were recognized.

Kurfees was introduced by his son, Charles, who is the current Mocksville-Davie Senior Legion coach. During his speech, Kurfees thanked the Town of Mocksville, community supporters, his family, past and present board of directors, coaches, and players for making Legion Baseball the successful program it continues to be today.

Kurfees spoke about his 34 years of involvement in American Legion Baseball, from reviving legion baseball with to preparing for this coming 2016 season.

“American Legion Baseball brings people together, and we are proud of everyone involved,” he said. “While many former players have gone on to have successful careers, we hope they will always remember their days on the legion team. Throughout the seasons, this program has been successful because of our fans. We hope you will come out and fill the stands this summer.”