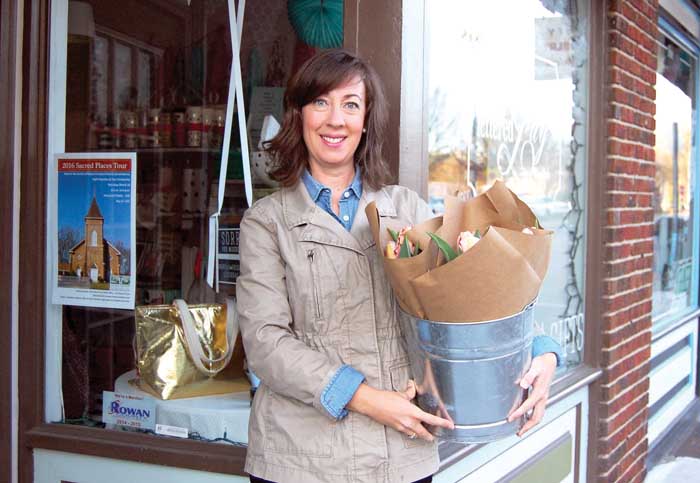 Emily Blanton makes a delivery of her Davie County tulips to Downtown Salisbury.

Blooms at Cana Farms is making it possible to enjoy fresh, in-season flower bouquets on a weekly basis this summer.

Emily Blanton said her family has owned Cana Farms for more than 100 years. She is the fifth generation to farm the land that she and her husband live on near Mocksville.

Blanton said so many people in her family have participated in keeping the farm alive that she wanted to do her part.

Blanton, an local attorney at Kluttz, Reamer, Hayes, Adkin & Carter, in Salisbury, has always enjoyed growing and cutting flowers, so she decided to make that her contribution to the farm with the help of her husband, parents and brother.

She said the idea to grow flowers was planted in her mind by Pam Morris, a floral designer, who suggested the idea during Blanton’s wedding.

Blanton soon realized that she had to figure out what to do with the flowers she was growing.

“Okay these things are continuously growing and I need to do something with them on a regular basis,” she said.

Blanton started researching flower farms and found out that some on the west coast and northeastern parts of the country offered subscription services.

“There’s sort of a movement for local flowers, like local food,” she said.

Blanton decided to start a flower subscription service for the farm last year. She started out by posting a few pictures on her Facebook page and offered flowers to whoever was interested. Now the service has a website and she is delivering flowers to three locations for customers to pick up.

The flowers bought at the typical grocer are shipped in from places like South America and Africa. Blanton said there are many points the flowers have to pass before they get to the customer’s house, and some types of flowers cannot survive the long transport.

Different types of flowers, like any other item that grows in nature, have their natural season.

“You can have a fresh tomato in January, but it doesn’t taste like the tomato that you pick off the vine in June,” she said. The same thing goes for flowers.

So when customers receive their bouquets from Blanton, they can really experience the seasons.

“What’s interesting is some flowers, like dahlias, I had one variety that would be bright pink in August but then by the end of September they were kind of peachy,” she said. “The foliage changes, so in the fall the bouquets look totally different than they did in the middle of the summer.”

Blanton said flowers from her farm are cut within the same week and sometimes on the same day that they get to the customer, so they last longer than most store-bought flowers.

The bouquet comes pre-arranged, so all a customer potentially has to do is put the flowers right into the vessel they choose.

Blanton said she wants to be able to offer flowers that are not often found in typical stores because they cannot survive transport from different countries.

“When I started doing this, one thing that I did was, I thought about flowers that my grandmothers grew and I talked to my mom about what she remembers her mom and her grandmothers growing,” she said.

People can join the Flower Farm Community Supported Agriculture program by purchasing a share of the farm’s crop to get fresh flowers on a weekly or bi-weekly basis.

Buying a half share will provide fresh bouquets for eight weeks, from mid-July through mid-September or mid-August through mid-October.

Purchasing a three-quarters share allows the customer to have flowers for 12 weeks, from mid-July through mid-October.

A full share is 16 weeks of flowers that start with tulips in March and April. The weekly deliveries span mid-July through mid-October. At the end of the season, customers can enjoy heirloom mums in late October or November.

There is also a bucket share option for restaurants, businesses or people who like to arrange their own flowers.

Blanton said the subscriptions are great as gifts for mothers, romantic partners and others. She said there are some people who buy a subscription for themselves.

Customers in the Salisbury area can pick up their bouquets at the Lettered Lily Design Studio at 109 W. Fisher St. There are also pick-up locations in Winston-Salem and Mocksville, and Blanton said if other places express interest, she is willing to offer more pick-up locations.

Blanton said she has gained a lot of interest so far. She said she thinks people like the opportunity to enjoy the beautiful local blooms.

“People use flowers for everything – a thank you, a birthday, a get-well, sympathy, ‘I’m thinking about you,’ weddings, anniversaries,” she said. “There’s a lot of emotion attached to flowers.”

For more information about the service, visit www.canafarms.com.