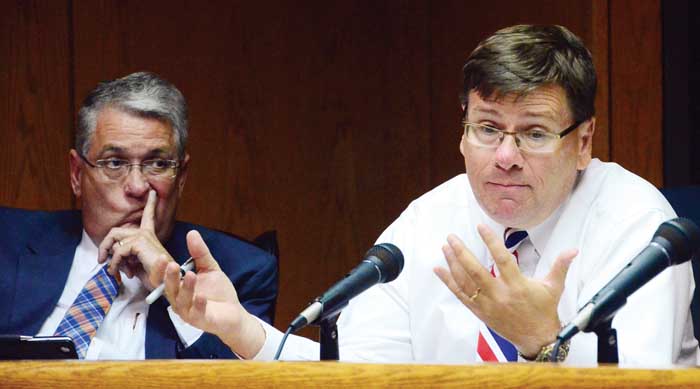 That’s one of the questions a throng of residents asked county commissioners Monday night as that board was deciding whether to change the way a portion of sales taxes are distributed.

They left with the same question.

Chair Terry Renegar and board members Richard Poindexter and John Ferguson voted to change the method of distribution that could bring some $1.4 million more into county coffers, taking it away from the towns – Mocksville, Bermuda Run and Cooleemee.

Renegar talked about possibly holding the towns harmless, or providing  the money to the towns to make up for the lost tax revenue. He said there had been quite a bit of talk in the last couple of days about trying to get an additional quarter cent sales tax, an issue Diane Foster of Mocksville said she would support if the board nixed the plan to change the distribution method.

“The next chapter remains to be written,” Renegar said.

The adopted resolution said nothing about hold harmless or other payments. It simply stated the distribution method would change.

“I’m not real sure why this was done,” Foster, one of four speakers before the board Monday, said. “I haven’t heard a reason.”

Foster said the only thing she has heard from board members is that the new method would be fair. “I believe fair is a situation that takes more than one party. You are one party. I do not think fairness is how they perceive this proposal.”

Foster said Mocksville sold sewer capacity to the county at cost. The town has been a major player – and contributor – to recent economic development successes.

In other words, she said the towns and county have historically cooperated. The current method of sales tax distribution has been in place for 41 years. “We ask you to honor that,” she said. “If money is not the problem, then what is the problem?”

One of the more emotional pleas came from Cooleemee Police Chief Bobby West, who most likely will face a cutback or elmination of the town’s police department as a result.

“Understand the devastation this is going to bring to this town. When you throw a tax change that is going to take a third of our budget … we can’t withstand that. We can’t survive a tsunami as big as this.”

With lower priced housing in Cooleemee, the loss of a police department could bring crime back. West is proud of his department’s statistics of reducing crime in the town.

“Where will the drugs go? To Cooleemee,” West said. “It’s the quietest place in the county right now – but that will dissolve.”

It could also cost the county more money, he said. Calls now being answered by Cooleemee police will become calls for the sheriff’s department, which is funded by the county.

While the money could be devastating to Cooleemee, it’s a drop in the county’s budget bucket, West said. “Is it worth that little bit of money? I don’t think you want it to be your legacy that you killed Cooleemee over a measly $75,000.”

Ron Bivins of Cooleemee asked for everyone in the filled meeting room to stand if they oppose the change. Because many were already standing, he had them to raise their hands. It was almost everyone except county staff.

He mentioned the November election. Many wore “Remember November” stickers. Already, Justin Draughn is trying to get signatures to get on the ballot in November, trying to do so because of this issue. More could follow. Incumbents Mark Jones, Renegar and Poindexter are the only three on the ballot for three seats.

“There is at least one more candidate, maybe two, to run in November,” Bivins said. “You may not be sitting in that seat.”

“We can’t afford to lose approximately 30 percent of our budget,” said Walter Ferrell of Cooleemee. “This is taking away the livelihood of this town. Ask our God, the Lord Jesus Christ … and think about what you’re going to do.”

Poindexter said one of the reasons for the change is residential growth, which generally requires more tax money to provide services than is brought in. The county, he said, spends millions investing in economic development. “Everybody in the county should be doing all they can to bring in businesses … not residences.”

Ferguson said Forsyth and Yadkin counties use the tax distribution method the county just adopted. Clemmons, Lewisville, Yadkinville – all seem to be doing well, he said.

“To me, this is about re-distribution, trying to put the taxes where all the people benefit. This system will work. What’s very important, everybody in our county, they pay the sales tax.”

Jones and Dan Barrett voted against the change.

Jones said he has not heard that the county is in financial trouble. If the county is providing a service to the towns and not getting enough back, those individual agreements should be investigated.

“We have partnerships,” Jones said. “This is not a zero sum game we’re playing. We can look at what we save when they spend, and what they save when we spend.”

He said the whole process was “backward,” and it is sending the county backward in relationships.

“As a county, we had really not healed (from the divison over whether to build a new high school),” Jones said. “We were in a us vs. them mentality. And now, here we go again. We were healing and now we’re back there.”

Barrett said the towns and county had been throwing numbers around lately about who pays for what to the extent it became confusing.

“Recognize the importance of our relationships,” Barrett said. “Can’t we wait and talk more productively … and find a common way to solve these issues.”