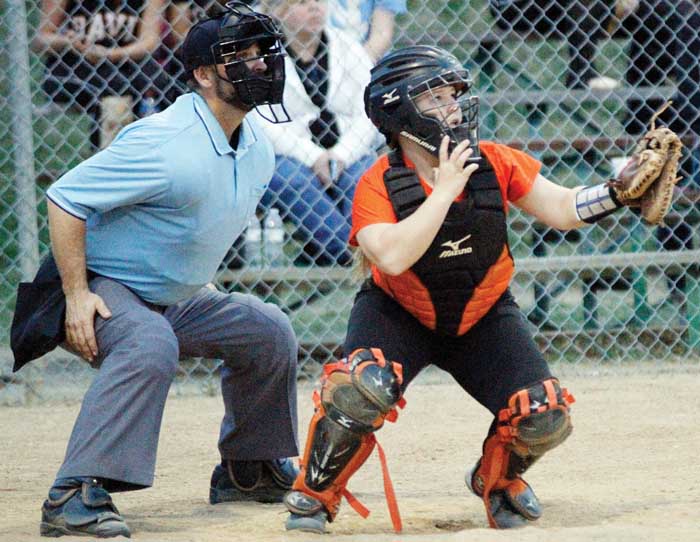 Katelytn Webb tracks the ball off the bat.

Davie’s varsity softball team entered the week 7-4, with all four losses to powerful opponents, including a 7-4 setback at West Rowan on March 21.

Davie held leads of 1-0 and 3-2, but the Falcons scored five of the game’s final six runs to hand Davie its third loss in four games. Davie outhit West 7-6 and made fewer errors (two to West’s three), but the Falcons managed to beat Davie for the second year in a row.

Davie jumped ahead in the top of the first inning. After Anna Devereaux doubled with two outs, she scored on a single by Makenzie Smith.

Davie turned a 2-1 deficit into a 3-2 advantage in the second. After K’lea Parks singled, Jessie Beck put down a sac bunt. Sydney Hendren’s two-out RBI single tied it. Another War Eagle scored on an error.

West, though, took control for good with a four-run third. The top of the order pounded out three straight hits to set things in motion.

Olivia Boger pitched well in relief, walking none, striking out five and holding West to one run in three innings.

The Falcons are a pretty formidable squad. They’re 8-2 overall and 7-1 in the South Piedmont 3-A Conference. Interestingly enough, they are coached by 1989 Davie graduate Jimmy Greene, who played football and basketball for the War Eagles.

Davie coach Dawn Lowery doesn’t dodge anyone. Each of her team’s losses are against top-notch competition. Besides West Rowan’s 8-2 record, Forbush is 8-1, West Forsyth 12-0 and North Davidson 11-0. Forbush’s lone defeat came from W. Forsyth. That’s a combined record of 39-3.

In a predictable outcome, the War Eagles trampled visiting Mt. Tabor 11-0 in four and a half innings on March 23.

Boger sailed through five innings in the circle, walking one and fanning nine.

Kasey Potts, Ferguson and the War Eagles pulled a rabbit out of the hat in a 6-5 comeback win over visiting Montour on March 24.

The Montour Spartans from McKees Rocks, Pa., came south to play Davie for the third straight year, and Davie triumphed for the third time. But it wasn’t easy. In fact, Davie was in big trouble after five and a half innings, trailing 4-1. Four errors nearly wiped out Davie’s decisive edge in hits (10-4).

In the bottom of the sixth, Davie mounted three runs to tie the score at 4. After Ferguson was hit by a pitch, Barneycastle and Tierney followed with singles.

A home run by the Spartans’ cleanup batter put Davie back in a hole, 5-4. But in the end, it was a day to remember for Davie’s eighth-place batter, Ferguson.

Parks sparked the seventh-inning rally with a single. After Potts doubled, Ferguson came through with a walk-off hit to lift Davie’s overall record to 7-4.

Davie got two hits from Barneycastle (2-4), Parks (2-4) and Ferguson (2-2, two hit by pitches). Julie Gough earned the win in relief, allowing one hit and one earned run in four walk-free innings.